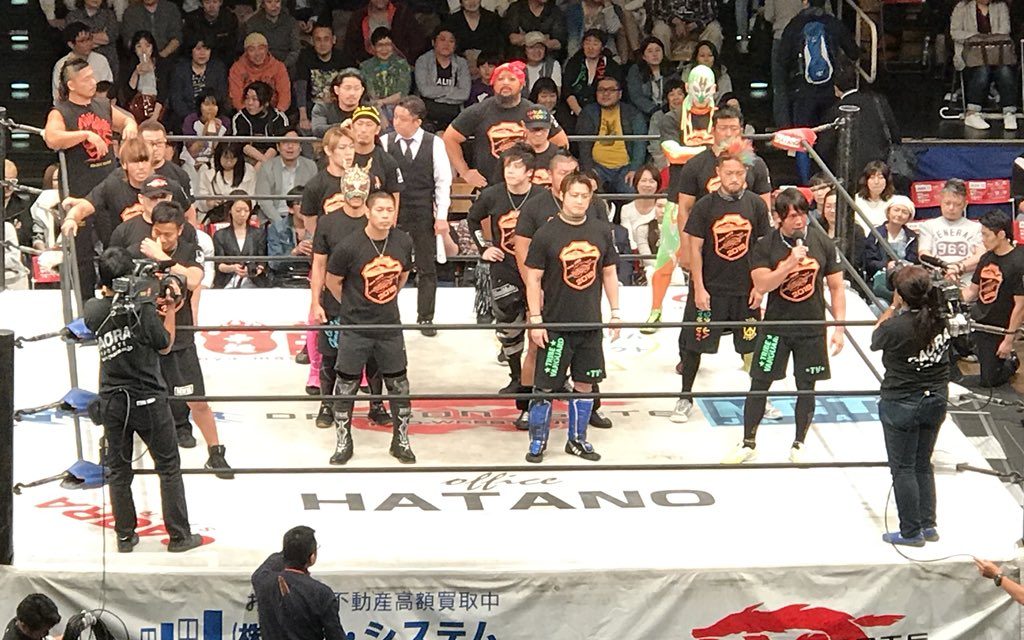 This time last year, I was writing about Dragon Gate’s latest attempt to make a major star out of one of their most promising youngsters on their biggest stage. The Open the Dream Gate match between champion YAMATO and challenger T-Hawk came and went without a major sea change. What we didn’t know at the time was how rapidly things were changing for Dragon Gate behind the scenes and how by Kobe World Pro Wrestling Festival 2018 everything would be different.

Dragon Gate’s difficulty in creating new stars wasn’t a new situation. They tried for years to make Shingo Takagi and BxB Hulk the Trueborn Generation’s (the era of students that began with the Ultimo Dragon Split) CIMA and Magnum Tokyo. Shingo and Hulk even had CIMA and Magu as their seniors this attempt. It took almost a decade for Shingo and Hulk to take the positions that the company designed for them. For Naruki Doi, it was only when he turned face after getting booted by VeserK for him to be “the guy.” T-Hawk would never become the ace for the millennial generation, and he would be out of the promotion within a year.

Around the time of Kobe World 2017, Dragon Gate entered an agreement with a Shanghai company that today is called Oriental Wrestling Entertainment. OWE had a score of talented athletes with Shaolin Kung Fu backgrounds and were attempting to launch a promotion that catered to Chinese audiences. Dragon Gate would help train these wrestlers as the DG style was thought of as a good compliment to theirs. CIMA led training and there were several trips to Shanghai over the rest of 2017 which led to the popular first OWE show this February.

While all of this was happening, the promotion entered an all-time creative lull. YAMATO’s long Dream Gate reign was never knocking crowds dead, even if the culinary products launched during his time on top sold remarkably dead. The Jimmyz, the longest tenured Dragon Gate-only unit, ended in an anti-climax where it took until mid-2018 for the former members to finally solidify their new units/positions. Shingo and Ryo Saito had a prolonged feud over the Owarai Gate title, a joke title that was an after-note on house shows, that took up card space and lasted from last December until Saito lost the Dead or Alive cage match.

Perhaps a reason why Dragon Gate was so boring creatively was all the turmoil that came out of the OWE deal among other things.

Last fall, President Takashi Okamura became sick and it looked like he would retire by the year’s end. Originally, CIMA would become the new president upon Okamura’s retirement. This was not without some consternation: CIMA and Okamura have butt heads going back to when DGUSA was alive. CIMA has always has been someone who had his pulse on what was going on internationally. Take a look at gaijin brought into Dragon Gate whom have become major stars in wrestling: Jack Evans, Matt Sydal, Pac/Adrian Neville and Ricochet are the biggest examples with guys like the Young Bucks, El Generico/Sami Zayn, Johnny Gargano and Kevin Steen/Owens as folks who never stuck around long-term, but CIMA found them first.

A situation like OWE in Shanghai where he’d get to mold wrestlers and seek out new talent was ideal for CIMA. President Okamura was much more conservative in his aims for the company. As a businessman with his fingers in a lot of different pots, it was much more important for him for the company to be a solid success at home and not worry about international expansion. It’s not known how much Okamura was for the DG/OWE relationship but given how has been in the past, I’d guess that he saw it just as a short-term transaction and not a long-term project from Dragon Gate.

Through talking to people involved with the company and some wrestlers, it became pretty clear that this discord surrounded the company for most of the later of 2017 and grew into 2018. As soon as CIMA dropped the Twin Gate at Final Gate, his Dragon Gate appearances dropped precipitously: he had only 18 matches from January until the Memorial Gate show, and posted a lot on social media from Shanghai. His social media tags went from #DragonGate and #Japan to #OWE and #Shanghai. Okamura’s health looked to rebound up until Kotoka’s retirement, but he was notably absent. Something was up.

One of the larger storylines for Dragon Gate going into 2018 was that Antias, the current heel unit, would be focused around the younger wrestlers of T-Hawk, Eita and El Lindaman rather than the older Shingo Takagi, Takashi Yoshida and Yasushi Kanda. At least that was the idea in theory. In practice, It felt like El Lindaman and Eita were sleepwalking through their unit leadership, the crowd couldn’t care less about T-Hawk, and the older wrestlers loomed ominously over the former Millennials. Antias quickly became the worst heel unit since the dire days of Deep Drunkers.

Everything came to a head at Dead or Alive. Two days before at a rare Kyoto TV Taping, CIMA made his first Dragon Gate appears in almost two months. He brought with him two of his more promising OWE trainees Gao Jingjia and Scorpio X2 to have a rather out-of-context tag match with T-Hawk. T&E dropped the Twin Gate titles to Big Ben in a match where T-Hawk did whatever he could to get the crowd to care about the champion team, but Eita looked like he would rather be back wrestling in Mexico. Shingo Takagi was the survivor in the apuestas cage match, shaved Ryo Saito’s head, vacated the Owarai Gate, and announced that he was taking back control of Antias and Young Antias could do nothing about it.

The next day was most noteworthy day in Dragon System history since the students split from Ultimo Dragon and started Dragon Gate. President Okamura retired and a new company would be created. The pre-existing Dragon Gate would be renamed Dragon Gate International, CIMA would be the president and it would be based in Shanghai. The main purpose of this company would be coordination with the OWE promotion and other international bookings. The new company was called Dragon Gate Entertainment (DGE), led by Okamura’s former right-hand-man Toru Kido. DGE would focus solely on the Japan-based Dragon Gate promotion. Going with CIMA to Shanghai and OWE would be T-Hawk, El Lindaman and Takehiro Yamamura.

There are a couple things I’d like to point out about this event. For one, no one from the DGE side was at the press conference. This is incredibly unusual as it’d be typical Japanese business for CIMA and Kido to at least have a handshake photo opportunity. This would lead me to believe that there is a formal split between the CIMA-led and Kido-led sides, however people within the company and President Kido himself have insisted that there is a relationship and no split. But if there was a relationship/not a split: shouldn’t the group now known as Strong Hearts appear on Dragon Gate’s biggest show of the year? And not for Wrestle-1, a promotion booked by Shuji Kondo, a guy that left Dragon Gate in controversial circumstances and has a noted distaste for his former promotion?

T-Hawk and Lindaman leaving Dragon Gate for OWE makes sense. The promotion has tried and tried to again to make T-Hawk the guy and failed. He needs new pastures. Daman has been in the promotion for so long without any sort of excursion. He needed to go somewhere for a while, so why not with CIMA to Shanghai? Yamamura is the person that hurts. Since his debut in 2015, it’s been well known he had a father-son relationship with CIMA. He was also looked at as the next hope, the guy that T-Hawk couldn’t be, the person who’d bring Dragon Gate forward when the earlier Dragon System guys would retire. In 2017, it felt like he was coming close to realizing his destiny. His draw against Big R Shimizu made him in Korakuen, and he started to be moved up the card and had an underrated feud over the Brave Gate against Kagetora. That was until he suffered a devastating cervical injury during the Summer’s 5 Unit Survival Race which everyone consider retirement. He made an appearance at Final Gate, but most of his time was spent in rehab when suddenly he was spotted at the batting cages in Osaka with CIMA and before we knew it, he joined his mentor in OWE.

Since this day, DGE feels like a promotion without a direction. Masato Yoshino won King of Gate 2018 and the Dream Gate the next day. It’s a move that makes sense. At times, Yoshino is the most popular wrestler in the promotion and is a solid person to navigate the promotion in uncertain times. In an attempt to bolster Antias, Masato Tanaka joined up as an assistant. This isn’t necessarily uncommon in the history of Dragon Gate, but it’s been a good while since an outsider of this level decided to come in part-time. Over Generation lost a long overdue disbands match and it seems like MaxiMuM is having issues with Shimizu and Doi coming to loggerheads. It would not be surprising if there’s a big shake-up in order to get more heels or younger wrestlers up the card.

The biggest event of Dragon Gate’s year is tomorrow, and the big storyline coming into Kobe is Shingo Takagi’s desire to reform Dragon Gate. When Kido was named new President, he created a board of directors that he would turn the company over to in a few years. Some wrestlers, active and retired, were named to the board, namely Masato Yoshino, Super Shisa and Takayuki Mori (the former Anthony W.). As he was left off the board, Takagi announced that he would win the title, declare himself President and install changes. Basically, he wants to close the door to the previous era and create one in his own image.

It is easily the most compelling story being told in Dragon Gate today, and probably more so than anything of recent memory. The company decided to blur the lines and somewhat play out what happened behind the scenes in the ring. Shingo’s been on social media over the last few months calling out the OWE wrestlers and getting others angry at his rebellious attitude.

It means we have another momentous day on our hands on July 22nd: Will Yoshino continue being the standard bearer of the promotion and a literal image of Kido’s order? Or will Shingo Takagi claim his fourth Dream Gate title and burn it all to the ground to create something new? Perhaps most importantly: How can Dragon Gate exist without the man who was their cornerstone for so long? 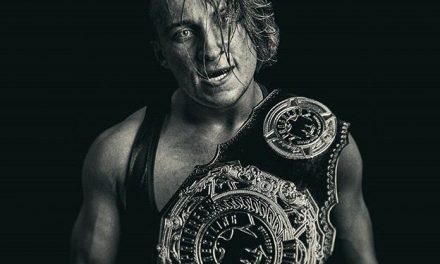