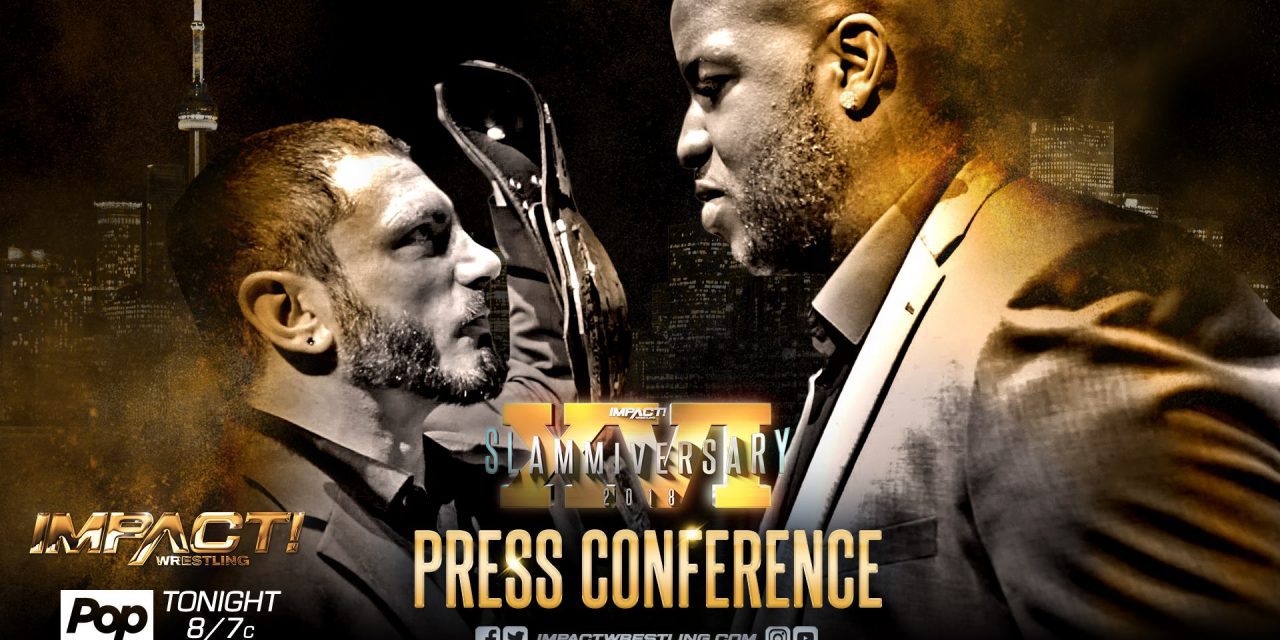 This week’s episode of Impact featured the last of the tapings from Orlando after Redemption in April. Whilst a thoroughly enjoyable episode, a strong rebound from last week’s dismal showing, it did feel like the end of a four-day taping session.

Still, stories were advanced, new tag team champions were crowned and there are now just four weeks until Slammiversary, which will emanate from the Rebel Complex in Toronto.

With that in mind, I thought this week I’d try and map out the Slammiversary 2018 card as I see it right now, going through what’s already been confirmed, what’s likely and other pieces of the puzzle currently without much direction. As I make a point of not looking at what happens at the tapings, I may be totally wrong with a lot of this, but bear with me.

Well, this week we saw Madison Rayne confirmed as the challenger for Su Yung’s Knockouts title after defeating Taya Valkyrie. It’s not the most exciting bout they could have put together, and it likely wasn’t their first-choice, but it’s a pretty good alternative to a longer programme between Su Yung and Rosemary.

That joins the world title contest between Austin Aries and Moose at the top of the card. Locking those two in with four weeks to go gives them sufficient time to build them properly and get eyes on both matches ahead of the big show.

What about the other title matches?

Given the events of last week and Jimmy Jacobs’ promo this week, it seems almost certain to me that Brian Cage will get his rematch against Matt Sydal for the X-Division Championship at Slammiversary. He’ll likely have to go through Kongo Kong to get there, but that seems like the obvious direction.

As for the tag team titles, the storyline involving LAX, King and Konnan is the most captivating thing from week to week on Impact. Joe Lanza described the storyline as something out of a B-level gangster movie and he’s pretty much spot on. LAX winning back the titles from DJZ and Andrew Everett seems like the right call, but who is there for them to face?

Konnan and King seem at loggerheads, and I sense an impending civil war within LAX. Homicide has been conspicuous by his absence recently, so I wonder whether we’ll see the Notorious 187 return at Slammiversary to represent K-Dog alongside his buddy and OG LAX member, Hernandez. A man can dream.

Outside the title matches, there are two matches that seem certain from feuds on the undercard. Eddie Edwards continue his downward mental spiral this week, blaming Tommy Dreamer for the issues between him and his wife and it seems likely that those two will square off, probably with some kind of stipulation behind them.

The closing segment of this week’s episode also seems to have given us another marquee match-up – the ever-despisable Sami Callihan going up against the man with no fear, Pentagon Jr. Trying to rip off Pentagon’s mask immediately ratchets up the tension between the two men and whilst the Crist brothers are likely to be involved, I highly suspect that’ll it be as interference rather than as actual competitors.

What else has been announced?

At the recent press conference for Slammiversary it was announced that Johnny Impact, who has missed the last two sets of tapings because of his appearances on Survivor and marrying Taya respectively, would be in action. What options are there for him? Well, a singles match seems like the obvious way to go. Could it be against the man who supposedly took him out of commission, Kongo Kong? I sincerely hope not, as Kong has stunk this year, but that seems the likeliest option.

The other man announced for a match is New Japan’s Bone Soldier and former X-Division champion, Taiji Ishimori. His appearance is undoubtedly down to the magical powers of Don Callis and I think he’s more likely to be involved in a multi-man scramble to showcase the X-Division talent. When Impact have Fenix, Dezmond Xavier, Petey Williams, Trevor Lee and the recently signed Rich Swann at their disposable, a car-crash opener involving all six men seems like the best direction to go in. It could have a future title shot on the line and could allow Ishimori to shine without affecting Impact’s own talent.

That might be it. Adding all those bouts up gives you eight matches for the card, which would ensure good pacing over the three hours so that everything gets time. That said, I would suspect we get another match on the show, even if it’s only a squash.

The Desi Hit Squad, managed by Gama Singh, are set to debut next week. The tag team of Rohit Raju and Gursinder Singh have appeared on a few of the Twitch specials and ONO shows this year and have looked quite green, but it is clearly a long-term project management have faith in. They could well be featured in a cool-down spot in a squash match, but they could also be in a fun six-man tag with Z&E and the returning Johnny Impact.

Similarly, it would be strange if Killer Kross, revealed as the mystery ‘X’ attacker last week, wasn’t featured on this show. Given that his Impact run has only just started, having him in action against someone fairly low on the totem pole or against a jobber to give him a big win on PPV would make sense.

Other names I’ve not mentioned as yet that I thought may have been prominent a few weeks back include Eli Drake, Tessa Blanchard and Allie. Eli I think would have been heavily featured but his contact situation is still firmly up in the air, so it’s hard to tell. As for the women, I think they deserve a spot but there’s no obvious angle as yet and they would feel pigeonholed onto the card.

So, to recap, here’s the card I think we will see at Slammiversary in a month’s time:

Agree with the card I’ve predicted? Let me know what you think on twitter at @AMSinclair97.