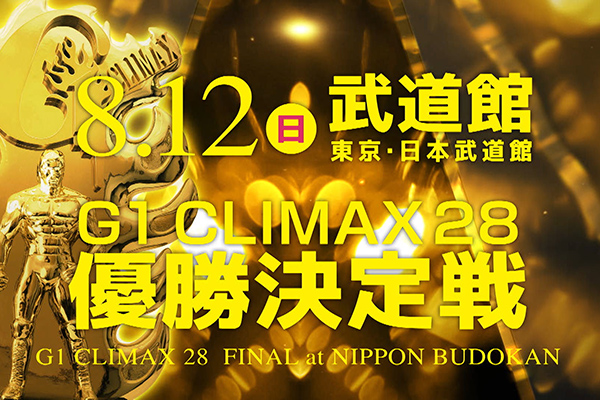 Let the countdown begin! This morning on their Kizuna Road show, New Japan Pro Wrestling officially announced cards for the upcoming G1 Climax 28 tour. Long-time fans of NJPW know just how important these schedules are as they can give fans insights into who may be winning blocks and who has a chance to win the entire tournament and get a shot at the IWGP Heavyweight Championship at Wrestle Kingdom.

Given the history of G1 Climax upsets on Night 1, don’t be surprised if White comes out with the shocking win. 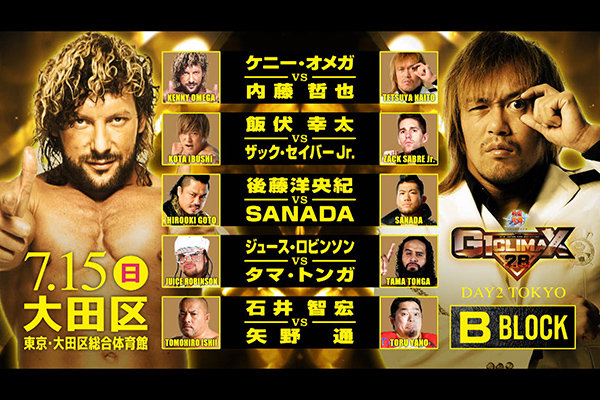 Naito is an early favorite to maybe win the tournament but some—myself included—theorized that he could possibly win the IWGP Heavyweight Championship at some point between G1 Climax 28 and Wrestle Kingdom. Perhaps he defeats Omega here, doesn’t win the tournament but faces off with Omega and wins the title at a show in the fall. We’ll see… either way, a fascinating matchup and a great way to kick off B Block play. 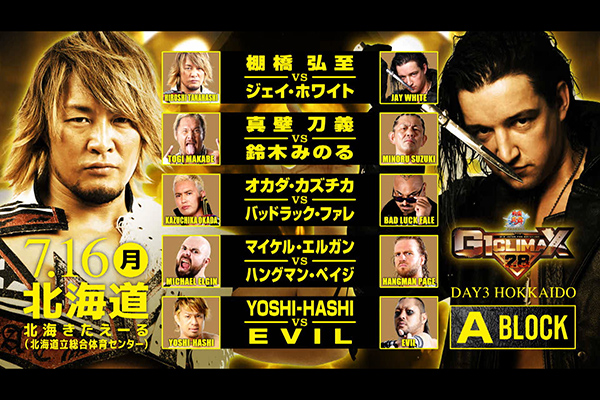 A Wrestle Kingdom rematch between Jay White and Hiroshi Tanahashi highlights the July 16 show from Hokkaido’s Hokkaido Prefectural Sports Center Hokkai Kitayell. Keep your eye on Bad Luck Fale and Okada as well. Fale is an interesting case each G1 as he’s a monster capable of getting an upset or out-of-nowhere win, don’t be surprised if he beats Okada and puts the former champ in a precarious situation after two nights. 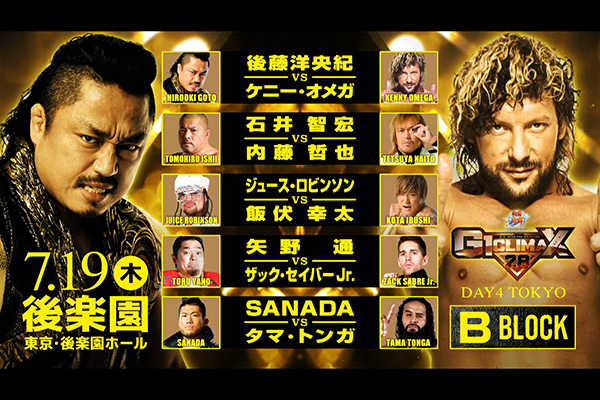 Kenny Omega and Hirooki Goto—the G1 Climax 26 Final—highlights July 19 in Tokyo’s Korakuen Hall. We’re also treated to Tomohiro Ishii vs. Tetsuya Naito, a matchup that back in 2014 was one of the highlights of NJPW’s year. The two have insane chemistry so while Goto vs. Omega will get most of the hype, Ishii vs. Naito could very well be the match of the night, if not the tournament. 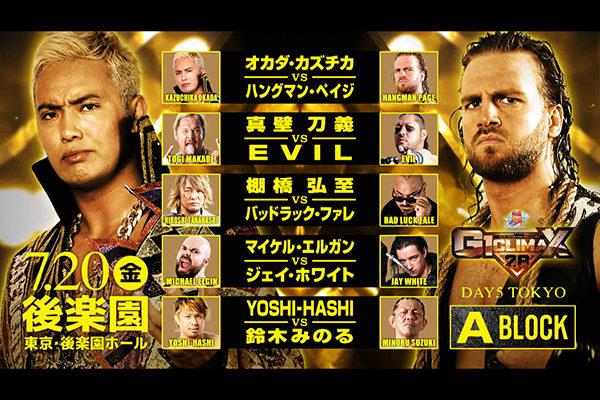 July 20 sees the G1 Climax back in Korakuen Hall, this time for the A Block. Hangman Page gets the biggest opportunity of his career. 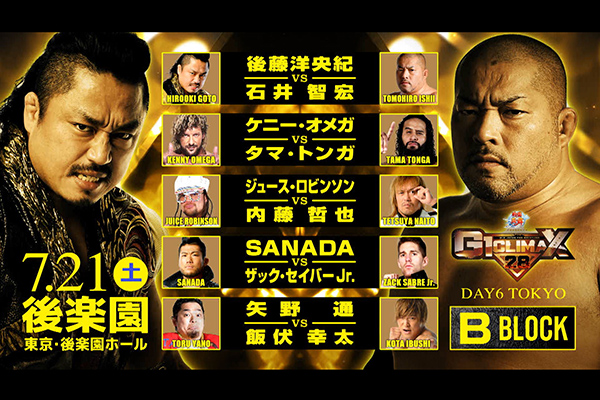 Don’t sleep on this July 21st show from Korakuen Hall. Juice Robinson vs. Tetsuya Naito, Hirooki Goto vs. Tomohiro Ishii and SANADA vs. Zack Sabre Jr all have a chance to be excellent matches. Kenny Omega and Tama Tonga will leave it all on the table and, while I don’t want to get into the Toru Yano argument again, there’s no better matchup for Yano than the equally eccentric Kota Ibushi. 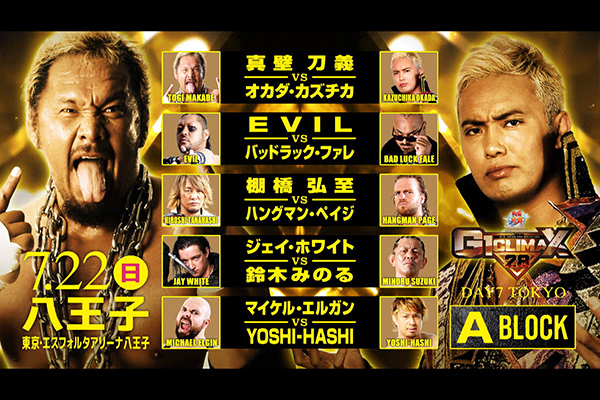 Day 7 (July 22) keeps the G1 Climax 28 in Tokyo but this time at Esforta Arena Hachioji, an arena to the best of my and Cagematch.net’s knowledge that NJPW has never run. The card doesn’t jump out but has some interesting potential with Jay White vs. Minoru Suzuki and a monster battle between EVIL and Bad Luck Fale. 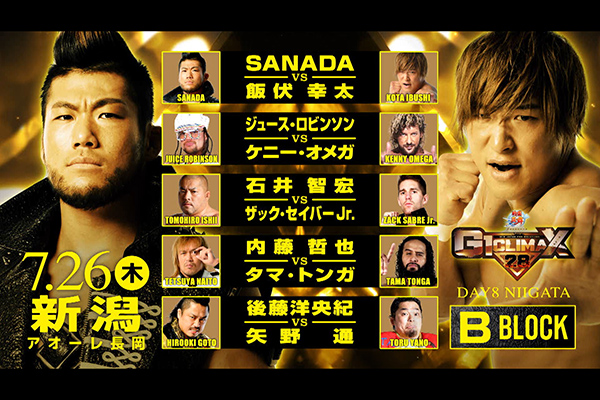 July 28 in Niigata is highlighted by SANADA vs. Kota Ibushi, Tomohiro Ishii vs. Zack Sabre Jr. and a sleeper Match of the Night contender in Juice Robinson vs. Kenny Omega. 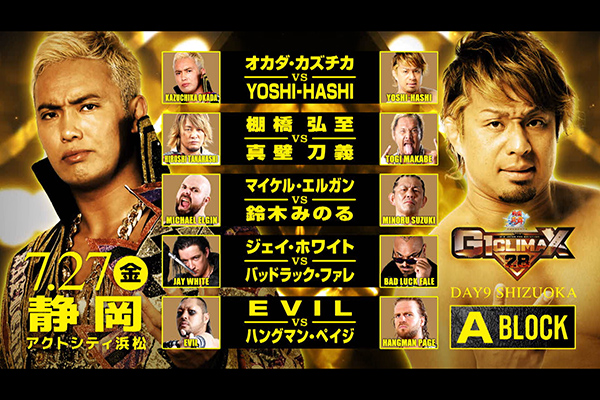 Night 9 takes place July 27 from Shizuoka and features Kazuchika Okada vs. YOSHI-HASHI, Hiroshi Tanahashi vs. Togi Maka… okay, this may be a night to take a much-needed G1 Climax 28 break. 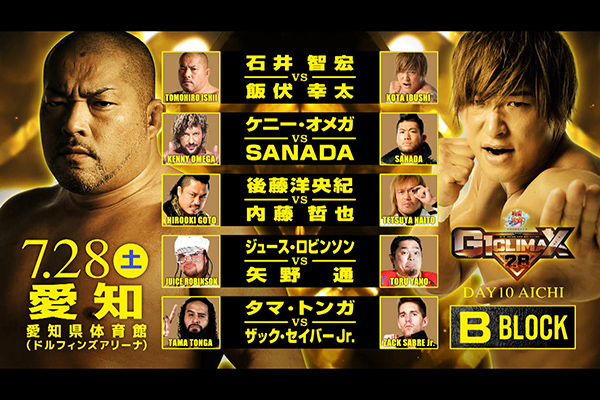 Now we’re back on track! July 28 in Aichi at the famed Aichi Prefectural Gymnasium. Kenny Omega vs. SANADA, Tomohiro Ishii vs. Kota Ibushi, Hirooki Goto vs. Tetsuya Naito. Wow, Day 10 could be the best show of the entire tournament. 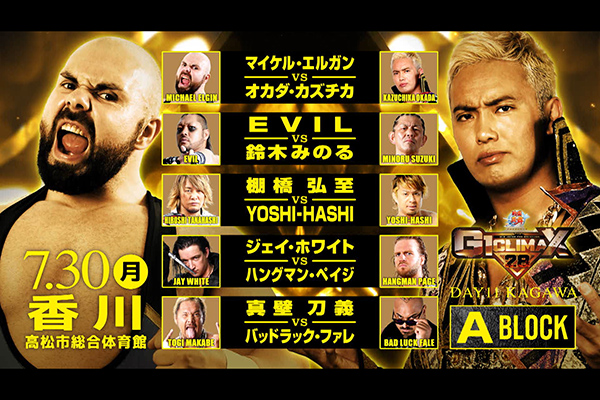 Day 11 sees the A Block take their talents to Kagawa’s Takamatsu City General Gymnasium #1 on July 30. “Big” Michael Elgin vs. Kazuchika Okada highlights the night but there is plenty to like in the undercard including Jay White vs. Hangman Page and a potentially fun EVIL vs. Minoru Suzuki match. 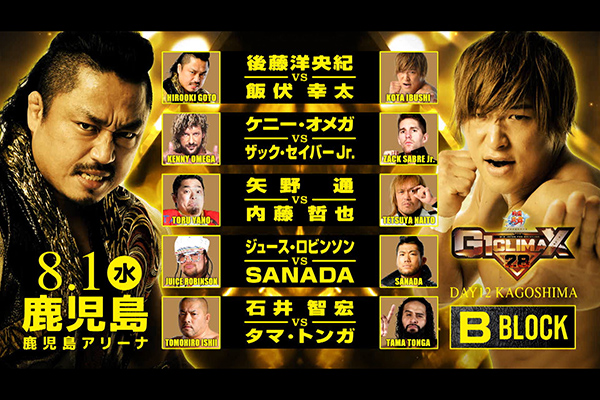 We’re in August now and the G1 Climax 28 grind is happening. Luckily, we have a fantastic night of B Block action to keep us sane. I can’t wait to see Kenny Omega vs. Zack Sabre Jr but Juice Robinson vs. SANADA and Hirooki Goto vs. Kota Ibushi all sound like a ton of fun. 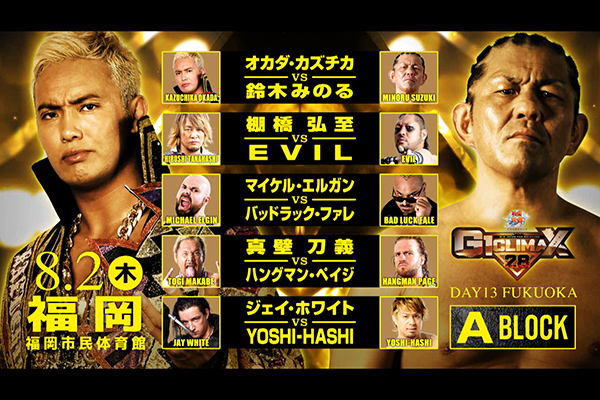 Day 13 brings A Block action to Fukuoka’s Fukuoka Citizen Gymnasium and also gives us a big time match between Minoru Suzuki and Kazuchika Okada. The two have had some of more polarizing matches in NJPW history and August 2 should be no exception. Keep an eye on Hiroshi Tanahashi vs. EVIL and Michael Elgin vs. Bad Luck Fale as well.

I can’t wait for August 4 from Edion Arena Osaka—the former Bodymaker Colosseum, one of the greatest names in arena history—as we’ll get a match that everyone should peg as a favorite for Match of the Tournament between Tomohiro Ishii and Kenny Omega. These two have made plenty of magic together over the last handful of years so expectations are certainly high. The night also features Juice Robinson vs. Zack Sabre Jr and oh yeah, Tetsuya Naito vs. Kota Ibushi. 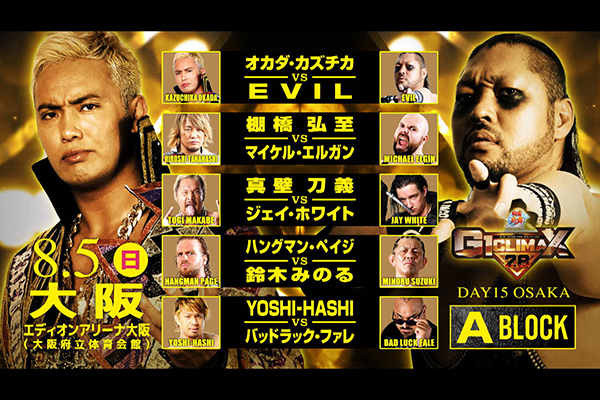 The A Block gets their turn at Edion Arena Osaka on August 5 in a night highlighted by EVIL vs. Kazuchika Okada and Hiroshi Tanahashi vs. Michael Elgin. 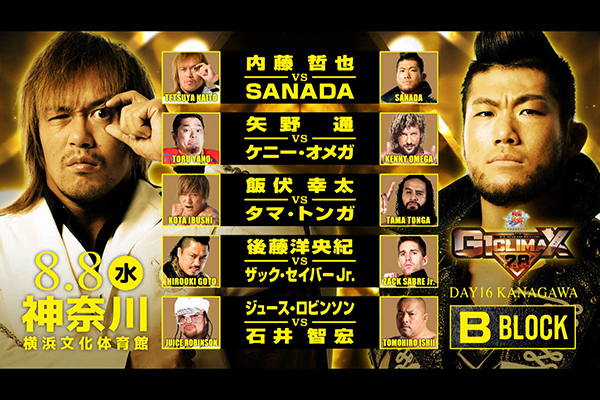 We’re getting down to the final few nights here with the B Block’s penultimate show on August 8 from Yokohama Cultural Gymnasium. The night is highlighted by the battle of LIJ: Tetsuya Naito vs. SANADA as well as Hirooki Goto vs. Zack Sabre Jr, Juice Robinson vs. Tomohiro Ishii and whatever the hell we’re going to get from Toru Yano and Kenny Omega. 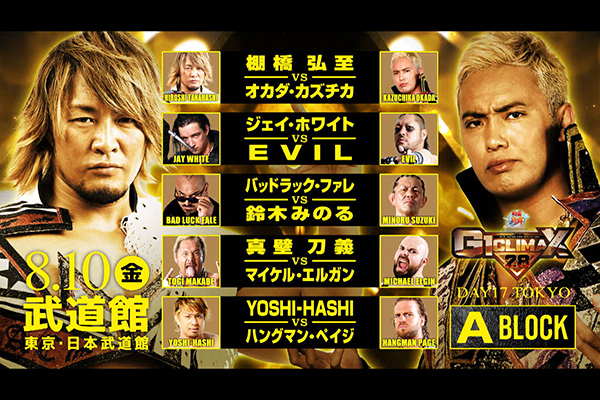 The final night for the A Block kicks off NJPW’s three-night stint in Nippon Budokan Hall, the famed arena that NJPW has not run on their own since 2003.

Oh yeah, and we’re getting Hiroshi Tanahashi vs. Kazuchika Okada in a potential block determining match. Cool, cool. People are also noting Jay White vs. EVIL and the placement of that match in the card for a potential White block upset.

Either way, this will be a massive show with Wrestle Kingdom implications. 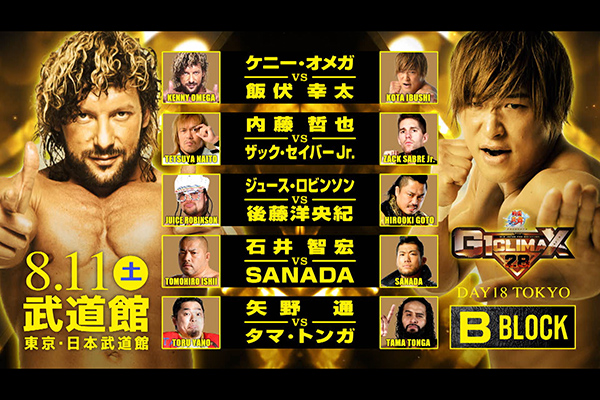 The final night of block play brings us probably the most anticipated match of the entire tournament as the Golden Lovers explode with Kenny Omega battling Kota Ibushi inside Budokan Hall. This is not a first-time affair for Omega and Ibushi as the two had a spectacular match in Budokan back in 2012. Ibushi’s moonsault off the balcony at the arena was the center of much controversy and rumors of Ibushi being banned from the arena made waves earlier in the year.

Clearly everything has been worked out or so we hope. Either way, Omega vs. Ibushi, on the final night of block matches in Nippon Budokan Hall in a match that could determine the B Block. What more can you ask for?

Well, Naito vs. ZSJ. You’re getting that too. What a night.

And we’re finally there. Nearly 30 days after the opening night, the G1 Climax 28 comes to its final stop August 12 from Nippon Budokan. We’ll find out who the G1 Climax winner is as well as one-half of the Wrestle Kingdom main event. 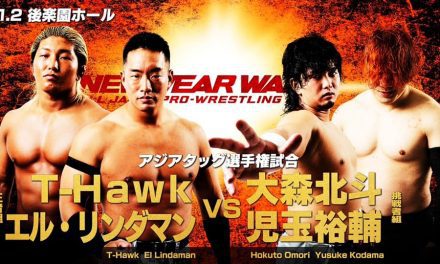 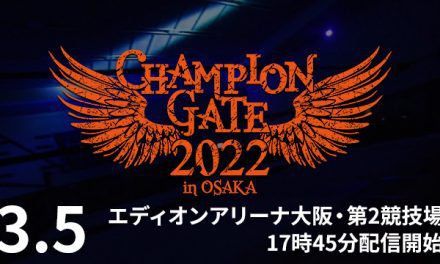