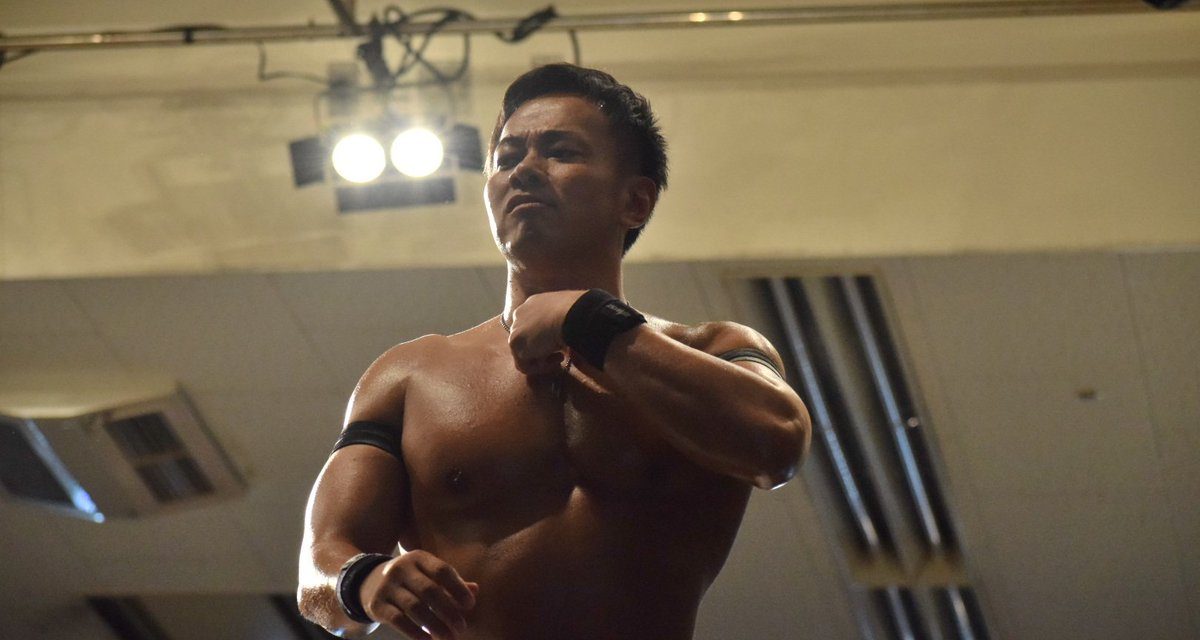 This set of shows marked YASSHI’s return to a Dragon Gate ring in Fukuoka for the first time since October 3, 2004, when he and his Aagon Iisou bandits defeated CIMA, Taru, and a debuting Shingo Takagi.

With that in mind as I began this match, there was something quite nice about seeing Shun Skywalker being able to shine. Nearly 15 years later, Dragon Gate still has an ability to produce engaging youngsters that will hopefully continue to lead the company into future generations. Takagi and Skywalker have drastically different in-ring styles, but Skywalker possesed what a young Takagi did, which is an ability to fight with passion, determination, and grit. Those qualities eventually went to Takagi’s head, and we have seen him transform into a vicious bastard, but there is a pureness to Skywalker taking a beating, rolling to safety, and making an excellent hot tag to Don Fujii. I just loved that.

Natural Vibes has an energy that Over Generation and Tribe Vanguard have never had. They are a babyface unit that I can get behind, especially with Kzy in the forefront and Genki Horiguchi and Susumu backing him. Any sort of grappling with Fujii and K-Ness is going to please me. This match worked. Kzy pinned Skywalker for the opening match victory. ***1/4

Yoshioka never posed a real threat to Horiguchi. More often than not, Horiguchi was one step ahead of Yoshioka. It wasn’t until the tale end of the match when we saw Yoshioka not only get in some offense of his own, but counter some of Horiguchi’s more memorable spots. He caught Horiguchi with a flash backslide, but Horiguchi rolled through and continued his offensive attack. Yoshioka ate a vicious Beach Break for the pin. **1/2

Unfortunately their physical appearance matched their in-ring performance. Ryo Saito’s young boy act is very good, but I’m wondering where it will go from here. When will it evolve? What is the end game?

For now, it is fine. This match with Punch was whatever. It wasn’t bad, but something feels wrong about it. I think Punch is so awkward that I’m expecting him to botch in matches, and when that doesn’t happen, I’m left dumbfounded. Regardless, it was nothing worth watching. **

“The sea was angry that day, my friends” is probably how Jason Lee will recount this match to his grandchildren one day, as his wavy, beach-friendly hairdo and zen-like personality was upended by an angry YAMATO.

YAMATO, just 24 hours off of losing the King of Gate finals to Masato Yoshino, took his frustration out on Yoshino’s MaxiMuM stablemates. He and Lee’s feeling out process was ended with YAMATO viciously striking him in the mouth, and the path of destruction did not end there. He took it to Doi, who also had very little luck against the face of Dragon Gate.

Lee was the one who eventually ate the pinfall, taking a Galleria from YAMATO with an addition kick to the back of the head from Hulk. This was a step in the right direction for YAMATO. He looked fired up. I was really let down by him in King of Gate because I expected him to work like this. Perhaps as we head on the road to Kobe World, we can see YAMATO heat up once more. ***1/2

The fate of these units hang in the balance on July 5th as they square off in a Naniwa Elimination Match. It might be all she wrote for Over Generation if Antias executes a similar game plan in that match as they did here. Problem Dragon was primarily targeted by Eita and Takagi, and if it wasn’t for some nifty evasive maneuvers, this match would’ve been over a lot sooner than later.

Over Generation has ultimately been a failure, and I say that as someone who was on their hype train much longer than most people. Ishida got hurt, which led to Yamamura setting the world on fire. Dragon Gate didn’t go all the way with Yamamura, and he eventually suffered a very real and very scary injury that has thrown his career into complete disarray. The fact is, however, Kaito Ishida is not a star, Dragon Kid and Gamma combined aren’t as big of stars as CIMA was, and oh, yeah, CIMA and Takehiro Yamamura are no longer in the company. This unit needs to die.

It’s never easy to predict unit disbands matches though. I would actually argue that Antias has done more harm than good, while Over Generation is just there, not accomplishing anything good or bad. The way this match was worked, though, leads to me to believe that Over Generation will be gone. Even though this match was 4 on 4, it felt like Antias was constantly swarming, constantly attacking, and constantly outnumbering the babyfaces. Eita, thanks to some foul play and distracting Referee Yagi, was able to pin Dragon Kid after a vicious Superkick. ***1/2

“Antias interrupted Gong Kids. A wrestling ring was no place for little kids. They gained the man advantage in the unit disbands match. That pretty much guarantees Over Generation was finished. As for Dragon Kid, the so-called Brave Gate champion. What kind of champion loses so easily? Talk about devaluing the championship. He was going to end this farce of a reign alongside Over Generation. DK said that he was letting this one win get to his head. He wasn’t going to get his hands on the title so easily. This title was a singles title. He had to do it on his own, without his friends. It also takes bravery. If Eita had the courage to come for it, he was welcome to try. He would defend both Over Generation and the Brave Gate. GM Yagi set the match for July 22nd, in Kobe World Hall.” IHeartDG.com

Yosuke Santa Maria’s journey back to being a serious performer and someone in the title hunt was ended by the beefiest men in Dragon Gate. Ben-K and Big R Shimizu have successfully completed their first Twin Gate defense since winning them a month prior.

Kagetora was more of an afterthought in this match, which surprised me considering his history of bringing his A Game to Twin Gate matches. This was much more about Maria trying to fend off MaxiMuM’s muscle and score a quick pinfall and as a result, the titles. That did not happen, however. The closest she came to doing that was when she countered a Shot-Put Slam attempt with a Crucifix Bomb, which looked outstanding, but Shimizu was able to kick out.

Perhaps the best moment of the match was the pop-up spear that was concocted by the MaxiMuM duo. Maria amazingly kicked out, which popped me in a big way. It came at just the right time of the match. It felt like it could be the finish, but Maria kicking out didn’t feel like overkill to me. A fed-up Ben-K eventually Powerbombed her to the mat and scored the three. This match established Shimizu and Ben-K as killers, and I look forward to hopefully a very long reign for the two of them. ****

WOOW!! What a frankensteiner by Maria!! #dragongate pic.twitter.com/35uawuuzVk

Shimizu pop-ups Maria into a spear from Ben-K!! #dragongate pic.twitter.com/h4yCXPT4H3

If there is ever a constant in the rapidly shifting world of Dragon Gate, it is Big Match Mochizuki delivering and restoring faith into the Dragon Gate universe (mainly myself) that Dragon Gate is on the right path. Mochizuki always delivers. Masato Yoshino is on a nearly similar plane, especially in recent years, and just 24 hours removed from a spectacular bout against YAMATO (I gave it ****1/2), I figured these two would blow the roof off of Hakata Star Lanes just like they did in Korakuen Hall for Mochizuki’s 20th Year Anniversary in 2014, and three years prior to that in 2011 in a match that helped kick off Dragon Gate’s unreal 2011.

They failed to meet my expectations, however.

I watched this match twice, and it was hard both times, but especially the second time around. I kept waiting for this match to be something that it wasn’t; I wanted a classic Mochizuki defense full of fire and determination. I wanted a spreadsheet match. Mark it down in the spreadsheet, tally up the stars, and sing its praises for the next few weeks. This match didn’t feel like a Mochizuki defense, and it didn’t feel like he was squaring off against the near-superhuman that is Masato Yoshino.

A match that was just fine to begin with was hindered horrifically by a botched finish. After attempting a Torbellino Crucifix, which he used to pin YAMATO and secure the King of Gate title a day prior, things went downhill at a rapid rate. The two went through a series of strikes which didn’t meet their usual standard, and then Yoshino and Mochizuki ended up on separate pages as Yoshino went to roll him up, but couldn’t latch onto Mochizuki the way he needed to. They fumbled around, and Yoshino finally pinned Mochizuki in a modified version of the Speed Star pinning combination.

This match wasn’t bad, but these are two men that in my mind, can rival a match between Kazuchika Okada and Kenny Omega. Masaaki Mochizuki, at worst, is one of the 10 best wrestlers to ever put on the boots, and over the past few years Masato Yoshino has shown that he is not that far behind him, but this match was not what it needed to be. It hits hard because it is coming off of a King of Gate in which I was bored. Had they knocked it out of the park like YAMATO and Yoshino did yesterday, all could have been forgiven. I would’ve once again looked past stagnant booking for a shiny MOTYC. This was not a MOTYC, however. This was a disappointment. ***1/2

“King of Gate one day, the Dream Gate the next. Winning would be unprecedented, but Masato Yoshino did it…The last year and a half have been the longest of his life, but today he stands as champion. For the new fans and the old, he owed this all to them. Winning was just the beginning, he planned on defending it…..Shingo Takagi interrupted. He can’t believe Yoshino pulled it off. He figured Mochizuki would win here. That poor old man. He got to kick back and rest during King of Gate and he loses to a fluke pin. Actually, YAMATO did too. In fact, Yoshino won all his matches that way. Except for one. When he faced Shingo Takagi he was beaten decisively in the middle of the ring. A champion that can only win via fluke? Once again it was up to Shingo Takagi to save this company from an impending crisis. He didn’t accept Yoshino as champion. Yoshino had two choices. Fight Takagi or hand him the title.” IHeartDG.com

Yoshino turns Mochi inside out with a lariat! #dragongate pic.twitter.com/rSf9k9fDAi

King of Gate ended with a whimper. After delivering such a magnificent KOG Finals, the Dream Gate match on this night failed to deliver expectations and felt like a very uncharacteristic performance from both men. Dragon Gate has matches cooking for Korakuen, which I’m into, but for a company that was just abandoned by its leader and three of their young, hot stars, they don’t seem to be fighting back with pride. CIMA can’t be missing this company if these are the kinds of shows they’re going to put on.

Thumbs in the middle for the final day of Dragon Gate’s King of Gate tour. There was nothing bad on this show, but should never be the bar for Dragon Gate. The Twin Gate match stole the show as Big R Shimizu and Ben-K continue to assert their dominance as champions, stars, and in-ring goliaths. Perhaps next year it will be their turn to shine in the King of Gate finals. 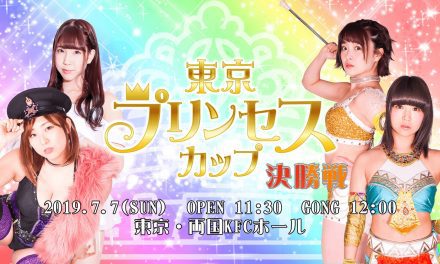