Glory Pro Only The Strong Survive (May 6) Results & Review 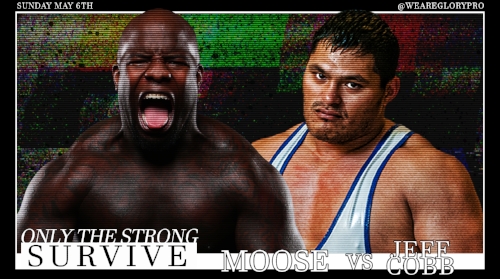 Glory Pro returns for Only the Strong Survive with an Ultimate Survival main event, as Crown of Glory Champion Jake Something leads a team to fend off the crew and challenge of Curt Stallion!

ONLY THE STRONG SURVIVE
MAY 6, 2018
Wild Country
COLLINSVILLE, IL

This is my first time watching Glory Pro. My first impression is that it looks pretty good. The lighting reminds me of how Riptide Wrestling in the UK light their shows; it’s very impressive. Speaking of impressive, as someone who scarcely watches EVOLVE, Henry & Drake are two guys I want to see a lot more of. Henry’s strikes are loud and vicious, while Drake is a very athletic big man. They impressed me when I saw them live on WrestleMania weekend, and they were very good here.

The issue I had with this was Everett Connors. I’ve heard his name around the midwest indie scene, but he was very rough here. He looks like he would be Carlton’s “cool” white friend on Fresh Prince of Bel Air, he got mixed up on spots multiple times, and he was presented as completely ineffective in the match. DJZ did most of the work here, and even then, the sound guy blew his airhorn spots. Drake missed a moonsault, leading to a ZDT and the win for the champs. The work was solid but there were a lot of distracting negatives. **1/2

The winner of the Gateway to Glory tournament, Air Wolf, took on the Zombie Princess here. This was fine. Air Wolf is eighteen years old, joining the group of (mostly European) wrestlers that make me feel old. He kept to the basics here, which he did well. Jacobs did his stuff well too. Jacobs won with a Sliced Bread #2. A perfectly fine pro wrestling match. **1/4

I’ve seen both Kylie Rae and Shotzi in the Chicago scene, while this is my first time seeing either Victoria and Stone. Man, this one was rough. Stone and Victoria were both considerably green, messing up basic spots and Shotzi straight up blew a couple of spots, including a top rope dropkick that came about a foot short of the target. Kylie was the best in this match by a mile, but she couldn’t do much to save it. Instead of sticking all four in there, maybe they could’ve had Kylie in there with Victoria or Stone and have a solid little match. Skip this one. 1/2*

Zane was meant to wrestle Darby Allin, but I’m gonna go out on a limb and say Darby was hurt. The commentators, who have ranged from bad to awful on this show, spent a good chunk of this match arguing as to whether or not Space Monkey is an actual monkey. This was your garden variety Space Monkey match. There was tail based offense. He made Zane slip on a banana peel. Zane won with a crossface. Moving right along. **

Here we go, let’s get down to business. These two were the biggest names on the show so far, and they produced what was the best match of the night so far. This was two big guys hitting each other hard. Cobb hit an Oklahoma Stampede, which is always appreciated by this writer. Moose took about 80% of this match, but Cobb hit him with a headbutt and got the Tour of the Islands for the win. A fun hoss battle. ***1/2

#NONEWFRIENDS DEF. BESTIES IN THE WORLD

#NoNewFriends have a hashtag in their name, which makes me hate them from the jump. Kevin Lee Davidson is another new face for me, and he was good here as a Beer City Bruiser-type big man. He did spots to Vega while Fitchett was on his back, which was fun. This was a little long in the tooth for me. I think they teased one or two nearfalls too many, but that’s a minor knock on what was a solid tag team match. The Besties hit their Brain Damage finisher, but Davidson yanked the ref out of the ring. That led to Mike Outlaw attacking the Besties and laying Adams on top of Vega for the #NoNewFriends win. ***

MJF is so over-the-top that I think it would actually help him to turn it down a little bit. But he’s 2 years in and getting booked everywhere, so the hamfistedness is working for him. He tells young Neo that he won’t even get a pin attempt on him in this match, before getting rolled up in the first two seconds and almost losing. What followed was a pretty basic match, with MJF’s personality running it. The finish was clever. MJF hit his backflip eye poke on Morpheus earlier in the match. He went for it again, only for Agent Smith to block it, poke MJF in the eye, and roll him up for the win. Nothing special. **1/4

Gary Jay comes out to “Joker and The Thief” by Wolfmother, a song I only know because I played MLB 07: The Show on my PSP nonstop. Apparently, Jay tore Parnell’s face open in a match in Zero-One (well, Zero-One USA), and they’ve been at each other’s throats ever since. The announcers advertised this as stiff, and these two brought the stiffness. Hard forearms and lariats were the story of this one. Out of nowhere, Parnell broke out a VON ERICH CLAWHOLD. That made me laugh, not because it was funny, but because it blindsided me that someone would use THE CLAW during a match like this.

The Rich Kraetsch special, an elimination match, main evented this one. Nasty Russ started for the heels, while Crown of Glory Champion Jake Something opened for the good guys. As a fan in the crowd cleared up, “it’s War Games rules, dude.” The heel announcer would not shut the fuck up about Something having poor planning, because he didn’t pin Russ at the start before anyone else came in. The big man Barackus took everyone out when he came in, and eliminated Wolf and Reed after everyone entered the match. In a surprise, Paco ended up eliminating Myers, T-Money, and Barackus before Stallion eliminated him.

That left Stallion and Something one-on-one, with Stallion earning a title shot if he won. Something’s knee gave him too many problems, letting Stallion hit a running headbutt to win it clean. There were little gripes I had, like people not using weapons despite there being no-DQ. But in the end, it was a fine match where they set up the next challenger for the title pretty well. Can’t complain about that. ***1/4

The first hour of Only the Strong Survive grated on me terribly. But once you get to Moose/Cobb, it’s pretty easy sailing to the end, with a fun main event. 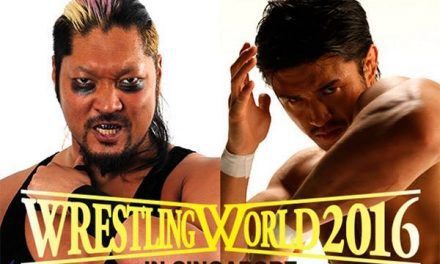 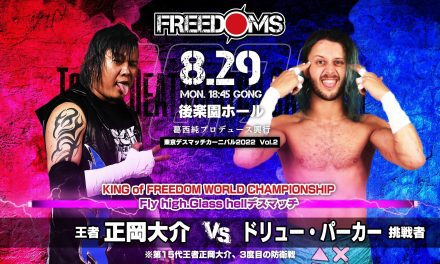