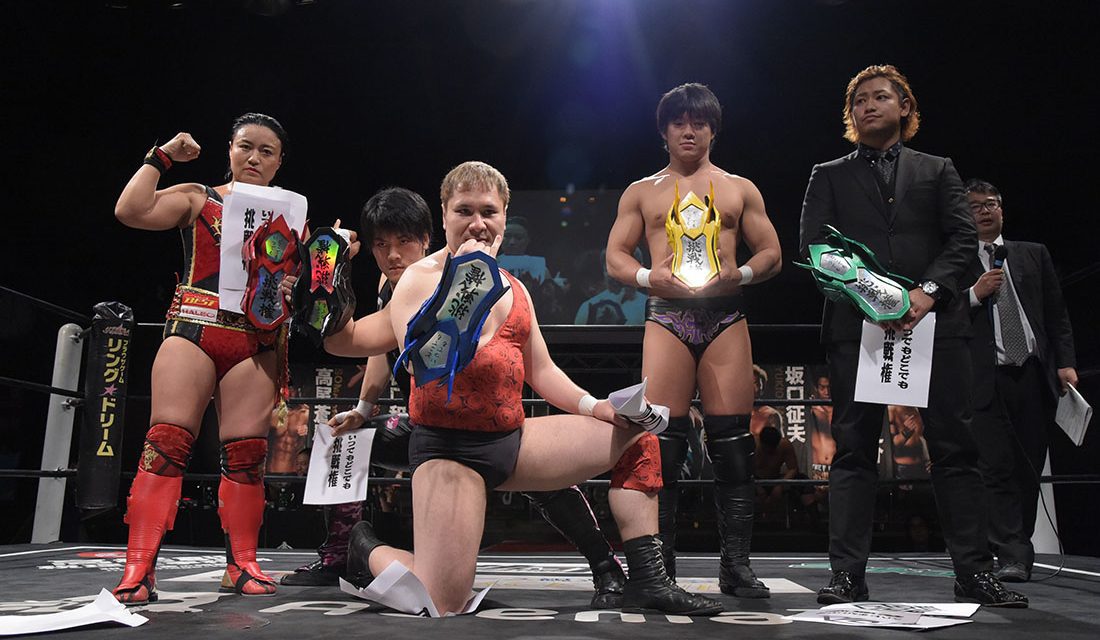 This was a typical undercard DDT match up, Ishii and Takeshita start the feeling out process with some quick transitioning through chain wrestling, looking to gain an advantage over the other competitor. Quick tag ins for Katsumata and Shimomura, the chain wrestling goes away between these two as they unleash striking offence on each other as the pace accelerates. Ishii & Shimomura double up on Katsumata, former KO-D Openweight champion, Konosuke Takeshita takes out Ishii and dominates until a Rana takes him out, he had Ishii have decent chemistry facing each other. The match returns to Katsumata and Shimomura, both regulars down in DNA, Shimomura is pinning Katsumata, Takeshita tries to break it up with a splash from the top but Shimomura moves and he splashes Katsumata. Katsumata recovers and takes out Shimomura after a Moonsault Double Foot Stomp.

This was very much Konosuke Takeshita vs Keisuke Ishii, Shunma Katsumata vs Daiki Shimomura, I would have liked to have seen this broken up but that being said, it was a good opener.

These matches are largely comedic affairs, this is where the uninitiated in the world of DDT either leave or stay cause of the pure wackiness of it. If one stays, we’re often rewarded with the amazing abilities of the likes of Takeshita.

Makoto Oishi is sporting another new haircut, this time it’s a reverse mohawk. Makoto Oishi offers Yoshihiko a handshake pre-match, it is refused. Yoshihiko is a doll. Yup, that’s right, a doll. Yoshihiko is no ordinary doll though, a former 9x Ironman Heavymetalweight Champion.

The match starts off with some very nice chain wrestling that leads to the mat where Oishi and Yoshihiko trade submission holds and pin reversals. Makoto Oishi delivers a nasty looking German Suplex to the poor Yoshihiko, Oishi is going for it, delivering high impact offence to the back and neck of his challenger. But Yoshihiko comes back with a Lariato! Yoshihiko locks in a single leg crab on Oishi, but he escapes but is then caught in a Sleeper Hold. Oishi gets out and turnbuckle bombs Yoshihiko, he tries to get Yoshihiko up onto the top rope but slips down and powerbombs him. 2 count. Yoshihiko flies at Oishi, delivers Reincarnation! 3 count! New Champion! Yoshihiko becomes a 10x and 1,315th DDT Ironman Heavymetalweight Champion.

This is a non-title match featuring current KO-D Openweight Champion, Shigehiro Irie going up against DNA wrestler Rekka. Rekka was unlikely to cause an upset in what was a quick defeat by submission to Irie’s application of the Tazzmission. Rekka did show a lot of fighting spirit and took it to the champion.

Can be a match to skip, sole purpose being to showcase Irie’s dominance.

The audience were asked to vote on the type of match, normal rules, pinfall only, knock out only or kiss only. 68% voted for Kiss Only. Stacking the odds against Tanomusaku Toba who seeks to impress his stepson.

The match starts off slow with the competitors trying to feel each other out, although Dieno is mostly just feeling himself. As one would expect from Dieno. Dieno gets on top of Toba and touches his butt, much to his horror and screams, the audience laughs at poor Toba. Dieno, much to my surprise, delivers a very nice snap suplex! Dieno goes up to the top turnbuckle, Toba knocks into the ropes to break Dieno’s balance, Dieno gets crotched on the top rope. Tanomusaku Toba delivers boxing style blows to the torso of Danshoku Dieno, his pinfall attempts on Dieno don’t count as he fails to kiss as he pins. Toba knocks Dieno with combination strikes but is again hesitant to kiss Dieno as he makes a cover, reluctantly doing so, but this awakens Dieno, who responds with a Kiss Lock submission, Toba gets a rope break but Dieno locks him in a kiss again and delivers an Overhead Throw Suplex. Toba is rocked, Danshoku Driver and pinfall kiss and it’s over. Danshoku Dieno wins.

Largely comedic affair, but worth a watch if you’re into DDT.

This match is more story based than what has gone before, matches that showcased elements of DDT to potential new viewers on Abema who are still getting used to what is a crazy product.

This match tells a story that goes from the disintegration of Smile Squash with Yuko Miyamoto leaving, then Soma Takao leaving and joining DAMNATION, turning Heel in the process and HARASHIMA being rescued by Shuten Doji.

Six envelopes hang above the ring which may or may not contain the right to challenge anytime, anywhere gauntlet prize, whoever gets the final elimination by pinfall, submission or over the top rope becomes the next challenger for the KO-D Openweight Championship.

Kota Umeda and Naomi Yoshida start in the ring, the classic story of speed versus power told between these two rising stars in the DDT Universe. Kouki Iwasaki enters. Naomi Yoshida is currently in control. Kazusada Higuchi is next to enter the ring. Tomomitsu Matsunaga enters and tries to eliminate Higuchi, Iwasaki joins in but ends up on the apron, Matsunaga is fighting Iwasaki who is still on the apron, Higuchi rolls back in the ring. Mike Bailey enters. KUDO enters. Higuchi eliminates Iwasaki.

KUDO sets up a ladder as Mizuki Watase slowly walks towards the ring, KUDO is unaware as Mizuki sneaks in and takes an envelope, and leaves.

Tetsuya Endo comes out but doesn’t enter the ring yet, as Mike Bailey, KUDO and Matsunaga pin and eliminate Yoshida. KUDO eliminates Matsunaga by throwing him over the top rope. MAO enters. MAO & Bailey are a regular tag team and take out KUDO and Higuchi with double team moves, who then roll safely out of the ring. Akito enters next, returning from injury. Endo still not in the ring. MAO and Bailey take out Akito, then set up a ladder. Endo powerbombs MAO off the ladder and eliminates Bailey, then successful getting an envelope and leaving.

Ken Ohka enters and sneakily sets up a ladder while everyone is brawling, he is noticed and pushed off. Honda, Umeda, Akito and Higuchi then stomp on a defenceless Ohka in the corner while Satomura sets up a ladder, the men now notice her betrayal when Honda goes to confront her and trips, he starts his usual spot on the microphone and Satomura gets down off the ladder. Everyone is listening to Honda while Ohka is still down.

Gets injured, wants to do something before he gives up and leaves to give the audience their money's worth, so he tells a story about Gon the Fox that he spent all night coming up with. Usually a story w/ play of words/pun that ends up in genitals dangling out of his pants.

I'd like to reassure everyone we don't see Antonio Honda's genitals on @ddtuniverse https://t.co/XbiucNTEft

Ken Ohka and Antonio Honda get envelopes. Meiko Satomura clears out Akito, Higuchi and Umeda and gets the last envelope.

Kota Umeda, Akito and Kazusada Higuchi remain and fight to be the next challenger, Higuchi quickly eliminates Akito and revives his feud with Umeda. Umeda kicks Higuchi as Higuchi chops Umeda. Fight forever, boys. Umeda reverses a Doctor Bomb attempt into a sleeper but Higuchi gets out, Sumo charge into Umeda, follows up with a Doctor Bomb and gets the win.

Meiko Satomura, Antonio Honda, MAO, Tetsuya Endo and Mizuki Watase, get the Right to Challenge Anytime, Anywhere but they have to defend that right on every show they appear on until their right to challenge expires in August!

Ken Ohka gets a punishment card for his efforts! 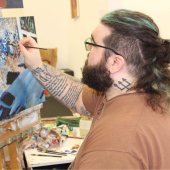 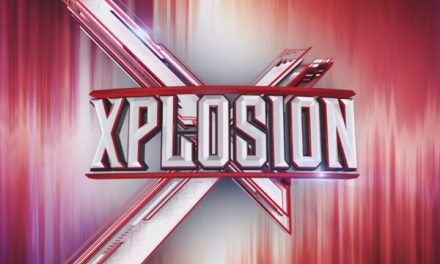 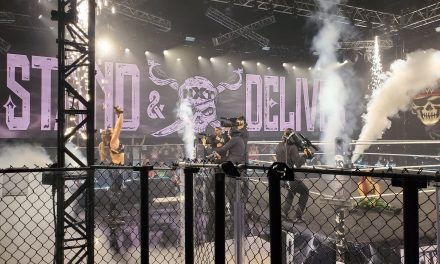