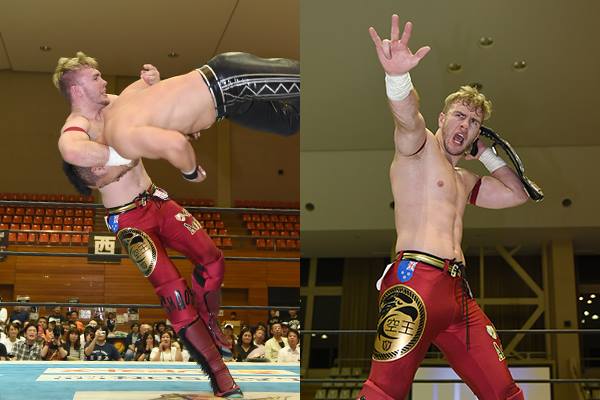 Tiger Mask’s inevitable losing streak continues. This match was fine, but forgettable. I would’ve liked to see more Grumpy Tiger as an ageing man fighting to stay relevant in a division full of young, hungry up-and-comers, but that’s not what we got here. The crowd were dead too, so we didn’t get the usual chorus of support for Mr. Mask that sounds like VOW writer Kelly Harrass battling Sagat on Street Fighter Alpha. I wish I could offer some insightful hot takes here, but I can’t. It was okay. **¾

Add my name to the list of guys singing the praises of one Albert C. Hardie Jr. Last year we got a fun but ultimately forgettable run from a guy who just looked happy to be there. This year, he’s being kind of a dick, and I like it. He’s trying to get himself a permanent deal by turning each one of his matches into a mini grudge match, and little things like viciously slapping away BUSHI’s handshake offer are small touches that help me get emotionally invested. Him ripping off BUSHI’s t-shirt and chopping his chest in one fluid motion was great. He’s also continuing to sell his injured shoulder very well. He really helps to dispel that feeling of two guys going through the motions in a meaningless match in the middle of nowhere, because he looks like he cares. And if he cares, I care. BUSHI, on the other hand, is difficult to care about as a singles wrestler because he’s firmly in the bottom tier of these guys in terms of excitement and talent. His style is mostly slow, grinding and uncharismatic. He’s fine as a tag-team wrestler but it’s hard not to zone out for the usual t-shirt chokes and rest holds. This match was alright but it felt like BUSHI was dragging down ACH.  ***¼

Flip has blocked me on Twitter so unfortunately I can’t provide any updates on his dietary status. YOH looks like a headless chicken when he flaps on the top turnbuckle during his introduction. This was a decent match but I felt like Flip was a step behind everything that YOH did. Flip can be fun to watch, but seeing him against incredibly talented, crisp workers like YOH exposes his relative lack of technique. Everything seemed a bit slow and a bit sloppy, including the finish, where Flip seemed unable to get himself in position quickly enough for the Five Star Clutch. His facial expressions are also quite goofy and cartoonish. I’m really not trying to pile on with the Flip criticism to be trendy, but he’s just not quite good enough yet to hang with the top guys in a fast-paced match. YOH, however, continues to impress me in spite of being somewhat overshadowed by SHO. ***¼

BEST OF THE SUPER JUNIOR 2018 BLOCK A MATCH
WILL OSPREAY (6) DEF. YOSHINOBU KANEMARU (4)

This match was a lot of fun! It’s probably the best Kanemaru singles match that I can remember – he did some moves that I don’t think I’ve seen him ever do before. Nobu really brought his A-game to the table, and the pair of them did a great job in coming up with creative twists on Kanemaru’s usual spots. For example, Ospreay clamping his hand over Nobu’s mouth before he was able to spray the whiskey in his face. Ospreay was excellent as usual, working his bollocks off in spite of the tiny venue, quiet crowd and throwaway nature of the event. Say what you will about Will, but he never phones it in. He also didn’t do any hokey screaming, which is a plus in my book, and there weren’t any other egregious examples of emoting that took me out of the match. The two of them have different styles that meshed well, unlike the rest of the bouts tonight. An enjoyable match that won’t break into many people’s top five of this BoSJ, but was very entertaining nonetheless, and salvaged what was an otherwise mediocre show. There’s also the added bonus of a Japanese guy chanting things in English throughout, including ‘This is awesome’ during Will’s post-match promo. An extra ¼* for that to bump it up to a round ****

Joel Abraham is the co-host of the Super J-Cast. Follow him on Twitter @thesuperjcast for NJPW stuff or @joeljabraham for photos of his lovely cat, Scampi.