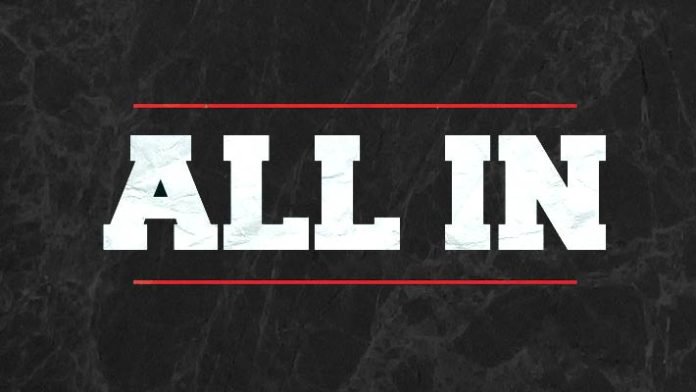 Thank you. Very much. pic.twitter.com/imOxKUSNsC

The Young Bucks (Matt & Nick Jackson) and Cody Rhodes achieved what many—themselves included—weren’t sure was possible. All In was, and still is, an ambitious undertaking from three men looking to disrupt the status quo of professional wrestling.

Whether or not you believe All In is a transformative, industry-altering event or not, there is no denying what Cody and the Bucks have done is significant. It’s been almost a quarter of a century since a non-WWE, non-WCW pro wrestling event eclipsed 10,000 fans in the United States.

The landscape never felt or really never was right for anyone to try to put 10,000 people into an arena for a pro wrestling event. Nobody was willing to take the risk. Nobody felt they were in the right place to do it. Even if you ask Cody and the Bucks, they weren’t sure they would be able to do it.

I had the opportunity to interview Cody immediately following an All In Press Conference on Sunday and even he was bearish on first-day ticket sales for All In: “The business side of me, the guy who paid for this with Matt and Nick would say… 4,000.”

Just an hour after that interview, in a little under 30 minutes after tickets went on sale via the Sears Centre website, Cody, Matt and Nick sold two and a half times that.

We can’t say for certain what All In will mean to the overall pro wrestling landscape but what occurred on Sunday is a great moment for everyone involved in wrestling or a fan of it from the outside.

For the first time since the sale of World Championship Wrestling and its assets to WWE—and really a few years before that when WCW ceased to be a true competitor—there has only been one game in town.

And let’s face it even after Sunday, there is still only one game in town.

But something new, different and potential industry-altering has arrived. Will it be here to say? Will it have transformative effects on pro wrestling? Only time will tell. However, for the first time in 17 years there feels like a disruption… a shock to the system.

TNA/Impact Wrestling tried to rock the boat on a few occasions—most notably reprising the Monday Night Wars in 2010— yet they never felt like any real threat. TNA never felt like a company or entity that could get out of their own way and be successful. Their model was much like the previous model that failed before them (WCW). Even if they had tangible success it felt fleeting, empty, hollow and unsustainable.

There’s a palpable energy to what Cody and the Bucks achieved with All In. This feels like a collective that has it figured out. They’ve marketed themselves well, expertly utilizing social media and video to leverage interest into tangible ticket purchases.

In October, Garrett Kidney put it perfectly when describing what Cody, The Young Bucks (as well as guys like Marty Scurll and Kenny Omega) have been able to do and why what they’ve done is so different from what we’re used to seeing in our current pro wrestling landscape:

“Being the Elite has allowed them to control their own narrative. Regardless of what any particular company is doing with them, they connect directly with their audience as themselves. No middle man. No interference. It’s just them, their personalities, their stories all filmed on their phones. All that coupled with consistently world class performances over and over again across the globe has resulted in them connecting on a level few others are right now or have in quite some time. And if you’re at a show that has The Elite in any form, be it as a trio or just The Young Bucks it’s fascinating and striking to see the sort of reach and influence they have right now.”

More than just giving the status-quo a much-needed poke, All In could come to represent a changing of the guard in terms of a pro wrestler’s individual power.

Since that fateful day when WWE absorbed their largest competitor, the leverage seen by a wrestler has been minimal. There is only one path to success as an American in pro wrestling: WWE.

In recent years New Japan Pro Wrestling has emerged as an alternative but on native soil there lacks a true outlet for making a living in this country with pro wrestling outside of WWE.

The Young Bucks (for lack of a better term) bucked the trend in recent years opting instead to work with several different companies and supplement their payouts with shirt and merchandise sales through Pro Wrestling Tees and later, Hot Topic. Many others have followed including Cody Rhodes, who, stuck in a lifeless position within WWE portraying a dead-end character Stardust, sought other options outside of the pearly gates of WWE. Rhodes sought to follow the model set forth by the Bucks. The path wasn’t easy at first and Cody struggled to find his footing post-WWE. In time though, by embracing the model and formula set by Matt and Nick Jackson, things changed.

Now Cody is one of pro wrestling’s most powerful figures.

What has made the Bucks, Cody, Omega and others so powerful is the aforementioned formula and its simplicity: individualism. Be yourself. Market yourself. Do what YOU want to do. This type of individual power isn’t possible in WWE. It wasn’t possible in WCW and it really hasn’t been possible for pro wrestlers since the territorial days. With no significant leverage, pro wrestlers’ fates are largely at the whim of their employers.

Do as you’re told because there aren’t any other options. If you want to make a living at this, you will do it our way. You will wear the shirts we make for you. You will have the type of matches we want you to have.

There is no central or templated-“way” for these guys.

What works for Omega doesn’t work for Cody. What works for Matt and Nick isn’t what’s going to work for Scurll. But by projecting their own ideas into the pro wrestling world and controlling their own narratives, their own characters, their merchandise, there is buy-in. There’s ownership in everything these guys do whether it’s fucking around in a restaurant on Being the Elite, parading a giant stuffed bear on Ring of Honor television or throwing 15 superkicks in a match. These guys know themselves better than anyone else and they use that to their benefit.

Instead of a central figure filtering their ideas and telling them what they can and cannot do, they control themselves. They have the final say in everything they do and everything All In will be. It has been quite some time since workers, individual wrestlers or the collective workforce has had so much say in how pro wrestling is produced. This is where All In could potentially be the most significant.

Some see All In as an anti-WWE vehicle. I myself have said similar things, painting All In as “US vs. THEM.” THEM isn’t WWE…exactly. Sure, they are one of the prime motivators but I see the event as something more positive than anti-WWE. I see it as pro-pro wrestling, pro-pro wrestlers. I see All In as an event about power, leverage, individualism, creativity, risks, innovation and imagination.

We don’t know that All In is going to do all those things long-term. Right now, we have an event, a date, a few names and a bunch of tickets sold. What’s next we won’t know just yet. However, in taking a dumb, ambitious risk like booking the 10,000+ seat Sears Centre in suburban Chicago for an independent wrestling show, they’ve proven successful so far.

Cody summed it up best in our interview when he said, “dumb ideas are sometimes the absolute best ideas.” 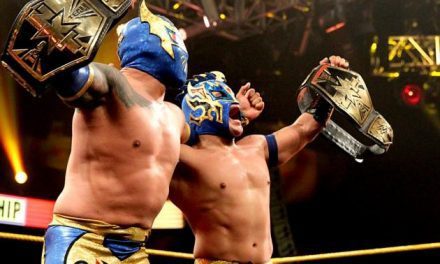 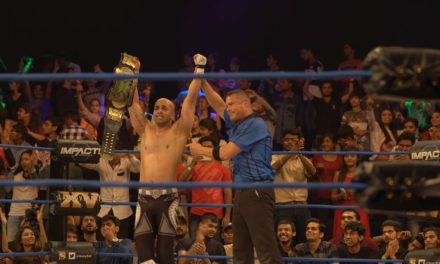