This was a terrific opener which took a while to get going but had a genuinely exciting closing stretch. You can see the talent oozing out of Tsuji and Uemura, even at this early stage. Watching this match felt like a historic moment that we’ll be looking back on in several years’ time when these two face each other in the main event of a big show.

Tsuji plays the role of the big bully, while Uemura is the fiery underdog with the superior wrestling skills but the size disadvantage. A really well-worked match that was a touch sloppy in parts, but praise should be given for the ambition shown by both wrestlers, particularly for the near-falls in the final minute. The timer runs out as Uemura lands an armbar. Worth going out of your way to see, although I daresay we will be seeing this match again in the future. ***¼

Damn, nowhere to go for Uemura as Tsuji hits a dropkick in the corner! #NJPW #njdontaku https://t.co/4ULitIni5Z pic.twitter.com/FDIFI6zpgV

It’s an interesting time to be a Young Lion, with Katsuya Kitamura’s status unknown and Tetsuhiro Yagi on the shelf with a fractured ulna. Oka appears to have appointed himself the de-facto captain of the squad, showing his leadership skills in this match when coordinating group attacks on the NJPW Dads. The dynamics between mentors and students is always fun to watch, enhancing what would be an otherwise throwaway contest.

This is the best way to use the likes of Nagata, Nakanishi and Tenzan, as their relatively limited mobility is offset nicely by the passion and energy of the Young Lions, who get a surprising amount of offense during this match. Nagata in particular takes one for the team, bumping away and eating several hard slaps from Umino in the latter stages of this match. These two have really good chemistry and I’d love to see a singles match between them. Umino, yet again, steals the spotlight here and seems destined for big things. A surprisingly fun match.
***

I didn’t enjoy this match. The talent and workrate of SHO and YOH could not overcome Suzuki-gun’s schtick and Rocky’s goofiness. Taichi needs a singles feud so he can do actual wrestling to stop him from lapsing back into silly Taichi. Roppongi 3K feel like the odd men out since the LIJ and SZG Jrs have paired off, such are the shortcomings of three-way feuds. Avoid, unless you like seeing Iizuka biting people. **

An entertaining and fast-paced affair, with the Ospreay/KUSHIDA encounters standing out as the highlight and building much anticipation to their upcoming title match. They work brilliantly together and push each other to the limit, even in the short amount of time they have here.

Henare and Ishii continue to have good chemistry, with Henare’s almost-deranged obsession with attacking Ishii being met by the Stone Pitbull with mild irritation. I’m really looking forward to their singles match as a benchmark to see what Henare is capable of. Juice and Goto also had some moments to build to their title match, although they felt a bit rushed here. I’m not really sure why Yano got the pinfall here as he doesn’t seem to have a feud on the table. ***¼

Okada’s entrance proves that he’s almost completely lost his mind. A diet of undiluted success and glory has its consequences.

The Finlay and White moments were the standout of this match, with a tangible rivalry between the two that has brought a much-needed competitive edge to Finlay. Whilst we know it’s all a work, you can’t help but feel that Finlay envies and possibly even resents the success that Jay White has been enjoying.

Finlay’s in-ring work seems to have improved, but he still needs to sort out his look if he’s to make it to the next level. Taguchi makes a figurative ass out of himself, and Okada and Tanahashi fail to contribute anything meaningful in a forgettable match. **¼

Bone Soldier will return, which seems like more of a threat than a teaser.

The crowd are still white-hot for the Naito and Suzuki feud, although there isn’t much in-ring action between the two, with Suzuki doing crowd-brawling, chair spots and extended submission holds.

The bulk of the work is done by KES and EVIL/SANADA, who work well together and seem to bring out the best in each other as serious tag-team wrestlers now that the Yano feud is out of the way.

A decent match, but I wanted more from Naito and Suzuki. ***

This is what happens when you ditch the three-way nonsense and put on a straight tag-match – a terrific contest that lived up to expectations. This LIJ team have done a great job in becoming a credible and cohesive tag-team, despite Hiromu having a much higher ceiling than a mere tag wrestler.

Despy played a brilliant foil to Hiromu in this match and I hope to see more of them in the Best of Super Juniors.

Hiromu was the clear star of the show, with the crowd chanting for him throughout as he played the babyface in peril. He threw his body around with reckless abandon and proved that he’s still a huge star whenever they decide to pull the trigger on him once again.

With this level of crowd support, I think it’d be a no-brainer to have Hiromu win the BoSJ. He’s bigger than the Jr. Tag belts, and Despy/Kanemaru are doing a fine job with them as the sly heels who cheat their way to victory. Desperado wins with the Pinche Loco onto the belt in a cracking match with lots of drama and believable false finishes. BUSHI and Kanemaru ****¼

An exciting, high-paced main event made up for a somewhat anaemic undercard. It felt like the big players were saving themselves for their upcoming marquee matches, which is understandable considering how long this tour is, but didn’t make for the most thrilling matches. Nevertheless, the main event delivered, and is worth watching along with the Tsuji/Uemura opener. 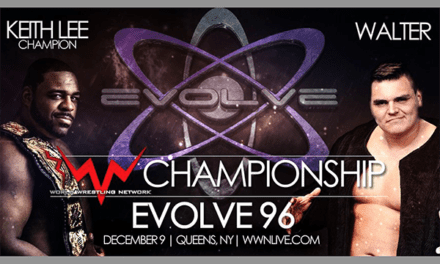