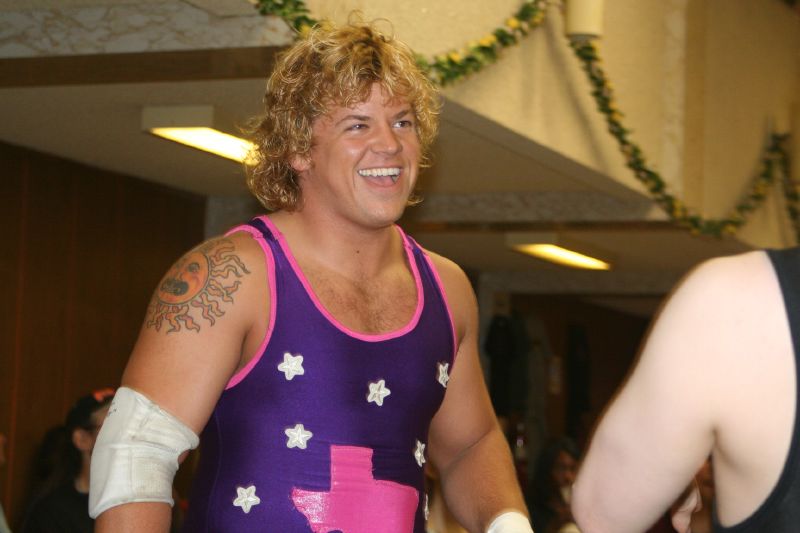 I wrote this article two years ago for Wrestling With Words. That site is no longer active and my archive is no longer accessible. When I woke up this morning and saw people posting about Sweeney, it shook me. This was the first year I had to be reminded what day it was. I suppose these things fade, but part of me never wants them too. I’ve decided to repost this here in case anyone wanted to read it or share in my memories of someone who was dear to me. I know if you saw him he was dear to you in someway as well. If you didn’t, I can’t wait for you to discover him.

When I posted this article initially, I pledged to give money to suicide prevention for retweets and shares. We raised loads, and I am sad that I’m not really in a financial position to do that again right now. Please let me know if you decide to donate. DM me proof on twitter and I will review a match or write a profile on a wrestler of your choosing. Thank you in advance.

I’ve never been a wrestling fan who wants to be friends with the wrestlers. I’ll say hello, and I’ll say great match, but it’s never been my goal to rub elbows, or know anything about their personal life. We say to never meet your heroes, and while I don’t think indie wrestlers are my heroes, I have found that part of my enjoyment of wrestling is tied up in my own ideas and thoughts and fantasies, and in some way actually hearing artistic intent (or lack thereof) can be distracting or defeating.

All that being said, I was proud of the fact that over the years, I had gotten to know Larry Sweeney, who tragically took his own life five years ago today. I was shocked and numbed when it happened, and in a way I don’t think I’ve ever really recovered as a person or as a wrestling fan. I’ve been a fan of wrestling for as long as I can remember, and I’d seen people I’d admired and cheered for die before their time. When that happened I felt a sadness one step removed; I felt sad that someone’s family was sad, I selfishly felt a sadness that I’d never see new art by someone who had previously moved me. Sweeney dying was different. It was someone I’d spoken with, someone whose hand I’d shaken, someone whom I had made laugh, and vice versa. Someone my age. Larry Sweeney ended his life when I was still figuring out what to do with my own. It was crushing. It was personal.

Many people have written these same words over the past five years, because Larry Sweeney touched many lives in the way that he touched mine. He was a giving, wonderful person, and he was a unique, brilliant performer. I don’t know that I have anything new to add about him. There are no new words that have been created to share what it was like to see him make an audience smile or yell or boo. I am not the right person to eulogize Larry Sweeney. What I hope I can do instead is share a few moments in time that may give you a glance of who Larry Sweeney was to me.

I met Larry Sweeney at a party in a town outside Oberlin College. I don’t remember who I knew and why I was there, but I certainly didn’t know too many people. Have you ever been to a party where you can’t seem to find anyone to talk to, and in order to avoid looking like a weirdo you decide to stay busy? You amble from room to room and refill your cup when it doesn’t really need it, you watch people play beer pong when that is basically the most boring thing on earth. I did that for hours. I went out to the back porch to smoke what must have been my seventeenth cigarette for the night when I did a double take like out of a cartoon or an 80s movie. I’d seen Sweeney on shows before, but never talked to him. I was pretty sure it was him, but I didn’t want to barge in to his conversation like, well, like a wrestling fan with no social skills whatsoever. At some point over the course of the night, I found the courage to introduce myself and tell him I was a big fan. I’m sure I came across like a loon, but it didn’t matter, because Larry was, at his core, a wrestling fan. In a party filled with things much more traditionally exciting, we stood there and talked about Randy Savage and Roddy Piper and ROH and CHIKARA and anything else I could think of. We parted ways that night, but before we did he grabbed my shoulder and told me wrestling needs more fans like me. I had no idea what that meant but I was drunk enough that I took it as a huge confidence builder. As he walked away, he gave that huge big belly laugh you’d hear in his promos. I remember it startling a random girl with her back turned to us.

I thought that would be it, but from then on, whenever I’d be at a show, I’d run in to Larry and he’d stop over and say hi. He’d remember my name, where we’d met. The conversation would inevitably be small talk, but we’d pick up where we’d last left, like a seeing a friend you don’t really talk to anymore from a town you’d moved away from. Once or twice, I’d end up at the same bar after the show, and I was always secretly thrilled when he’d come up and say hey in front of other wrestling fans. Looking back I’m sure no one cared or thought twice about it, but I always imagined they were secretly jealous that one of the cool wrestlers was talking to me and not them. It sounds stupid, putting it in writing, but having a wrestler seemingly single me out as a “cool fan” was meaningful and impactful during that period of my life in ways I can’t reasonably quantify. I was lost, and in the small little world that I cared about, someone I thought was great and powerful and creative made me feel the same.

A few years later, I was sitting in the crowd during Final Battle weekend, and Sweeney came out for a match against Claudio Castagnoli. Two kids next to me kept shouting “Mr. Whybrow!” and laughing to themselves, so I asked what the deal was. They told me that a few months prior, they had shown up to an SAT prep course and their regular tutor was absent, and in his place was a substitute….named Mr. Whybrow, who looked suspiciously like a wrestler and manager they had both seen multiple times. They both knew exactly who he was, and kept looking at each other, unable to comprehend their worlds colliding, just like me at that party. As the course ended for the evening, they timidly walked up to him, and had this exchange:

And as they stood there in silent shock, he tipped his head back and let out that big famous belly laugh before looking back and them and saying “Fellas, ain’t no doubt about it”.

Even though that story didn’t happen to me, in my mind I think about it as the quintessential Larry Sweeney story. It shows how smart he was, his sense of humor, and the weird way that he was always living in two worlds at the same time. He was Alex Whybrow, but at the same time, he was always Larry Sweeney. It wasn’t a character he played, or something he turned on and off. It was a part of him that he would let out, or tap in to. It was all of that which made his time in the ring so special.

I still think about the last time I saw Sweeney. It was a year or so after that night at the ROH show, and I had heard stories that his behavior had been getting more erratic as of late. He and ROH had somewhat of a disagreement, and the end result was him no longer being booked for them. I don’t have details and it’s not my place, so I’m not going to conjecture or gossip. I hadn’t seen him for myself or spoken to him, so I didn’t know if anything was really the matter, or if it was just weird wrestling stuff that I didn’t understand.

I didn’t see him at the show, but when I went out after, he was outside the bar. He didn’t look himself. He seemed upset about something. He was talking fast to anyone who would listen. There were a few wrestling fans from the show around him, and he was trying to get some money for drinks. He kept offering to do back bumps on the concrete in the parking lot for a dollar, and because wrestling fans are terrible people, they kept egging him on. I couldn’t bring myself to do anything. I went inside, and I never saw him again. If he came in to the bar, he didn’t say hello. I didn’t either.

The night that Larry Sweeney died I went on a first date with the woman who would become my wife. I’m smart enough to think that there is some meaning in that but not smart enough to figure out what exactly it all means. I had left my phone in the car for the date, and the fireworks of a first kiss in a library parking lot were still going off in my head when I saw I had dozens of missed calls and texts. I drove home numb, I didn’t know what to do. I called my dad, who listened to me ramble on about someone whom he had only ever seen on the cover of a DVD I gave my kid brother. I bought beer and cigarettes and watched YouTube clips by myself until I cried. A wrestler had died tragically. Someone I knew had died tragically.

We’re all so scared of mental illness. I’m not sure I knew what it was at the time. He had wild eyes. I couldn’t deal with them. I didn’t know how to help, so I didn’t. I refused help to a man I called a friend, a man I respected. I’m not egotistical enough to think that showing him kindness that one night would have made his life turn out any differently, but I do think it would have made one hard night for him just a bit better. He had many people in his life who were able to do what I couldn’t, because he was a man who was easy to like. Even so, on that night, he was scared, and not himself, and needed someone’s support, and I bought myself a beer and sat talking to no one while he was quite literally out in the cold. I try not to live my life with regrets, I don’t often think of moments I’d change, but on long, lonely drives, even in my best moments, I see his face in my mind, lit up by the street lights and the neon of the bar, and I wish I could have found it in me to be just a bit braver. Just a bit kinder.