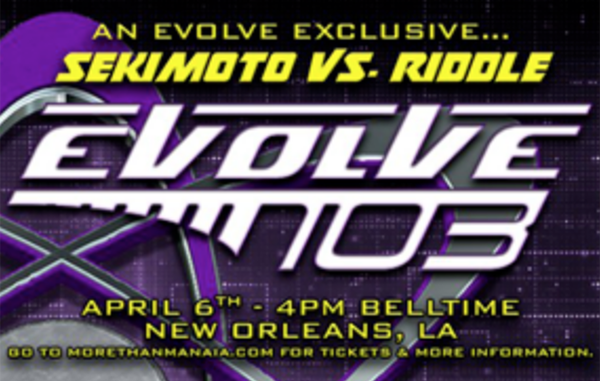 Before going through this card, I should note that there were a number of changes made due to injuries. Darby Allin and PROGRESS World Champion Travis Banks both got hurt on the PROGRESS event earlier in the day (I heard that Allin got a concussion, though I’m not sure what injury Banks suffered). With those two out of action, a few things had to be switched around on the undercard. Tracy Williams was moved out of the Four-Way Freestyle to replace Darby Allin in a singles match with WALTER, while Mark Haskins replaced Travis Banks in a singles bout against Chris Dickinson. Finally, Chris Brookes was brought in to fill the spot that Tracy Williams left open in the Four-Way Freestyle.

The show started off with Lenny Leonard in the ring for his usual introduction, and he was going through the changes to the card when Jarek 1:20 and Candy Cartwright came out. Jarek took credit for Darby Allin’s injury, and said that he should be taking his spot on this show. After Lenny Leonard responded by saying that’s not how it works here in EVOLVE, Jarek said something, and then left. I honestly couldn’t tell what Jarek’s response was. In general, it’s been really hard to hear people cut promos on the EVOLVE shows this weekend. I’m guessing the venue wasn’t mic’d properly, because not only was it difficult to hear people talk on the mic, but it was hard to hear the crowd reactions at times, both on EVOLVE 102 and on this show.

This was originally scheduled to be just a non-title bout, but following a loss to DJ Z the night before at EVOLVE 102, Austin Theory called out Keith Lee, and demanded that they put both of their titles on the line. Lee was quick to accept, and thus, we have a double title match. I wasn’t expecting this to open up the show, and I certainly wasn’t expecting the result, as Austin Theory captured the WWN Title in just over ten minutes. With the recent rumors about Keith Lee potentially heading to WWE, I figured that (if those rumors were true) Lee’s reign as the WWN Champion wouldn’t last much longer. I don’t want to say that Austin Theory was the last person that came to mind when thinking about who could potentially dethrone Lee, but he certainly wasn’t the first person I thought of. To be fair to Theory, he’s been touted as a future star ever since he came to EVOLVE, and he’s slowly gotten better as a performer over the last fifteen months. Making him a double champion was a….decent idea on paper (and it would lead to him getting to defend the WWN Title at WrestleMania Axxess), but this match didn’t do him, or the WWN Title, any favors. While this bout was far from bad, it was very pedestrian, especially considering that there were two titles on the line. Lee controlled most of the match, but Theory did managed to fight back, and the action did pick up a bit down the stretch. Then we got a screwy finish, as Theory hit a low blow on Lee after the referee got knocked down, and followed up with the TKO for the win. Again, for a match with such high stakes, this was incredibly average. **1/2

Keith Lee got a big ovation from the crowd as he departed. At this point, I’d be very curious to see if he shows up in the crowd at NXT TakeOver: New Orleans.

For the most part, this match went exactly how I thought it would. The first few minutes featured a ton of grappling exchanges, and I was a little worried that we would see this for pretty much the entire bout. Fortunately, the pace picked up a bit one they stood up and started trading strikes. After we got some accidental blood from Thatcher (he might’ve busted his lip, but I’m not really sure), he put Garrini away after hitting a butterfly suplex. This type of match certainly isn’t for everyone, but the good news is that it was kept relatively short (it went just over five minutes or so). For it’s spot on the card, it was perfectly fine. **1/4

After Jason Kincaid (who now has head tattoo after shaving off all his hair) made his entrance, Jarek 1:20 ran out and tried to attack him. I guess he was trying to take Kincaid’s spot, but he was sent packing pretty easily. Then the referee decided to eject The Skulk from ringside before the match even began, to ensure that they didn’t get involved. This was a very entertaining four-way that featured nonstop action right from the opening bell. It only went about eight or nine minutes, but they managed to pack in a lot of stuff in that time frame. All four men got opportunities to shine at various points, but in the end, AR Fox would pick up the victory after hitting Chris Brookes with the Foxcatcher. There’s not much else to say beyond that. It was really fun to watch, and it gave AR Fox a nice rebound win after coming up short against Will Ospreay the night prior. ***1/2

It was pretty cool to see PROGRESS have some of their talents fill in here for the people who got hurt on their show earlier in the day. We saw Chris Brookes in the previous bout, and in this match, Mark Haskins made his return to EVOLVE to take on Chris Dickinson. These two had a technically sound singles encounter, but it never felt like they went into that next gear. In that regard, this was actually very similar to the match that Dickinson had with Zack Sabre Jr. at EVOLVE 101 back in February. In both cases, the bout went longer than it needed to, and they never picked up the pace at any point. Again, the wrestling here was very solid, but aside from a few spots here and there, it lacked any real intensity. This was also the longest match on the show at nearly seventeen minutes, and to be frank, did this really need that much time? Anyway, Dickinson would ultimately pick up the win here via submission. ***1/4

It sucks that Darby Allin vs. WALTER didn’t end up happening. A lot of people were really looking forward to that one (myself included). Now I wasn’t entirely thrilled with Williams being the replacement here, but when the dust settled, this ended up being really good. There was hard-hitting action throughout, and these two seemed to work well together. WALTER was in control for a good chunk of this one, as he just destroying the chest Williams with numerous chops. The crowd was really behind WALTER here, and at one point, they actually started a “WALTER-Mania” chant. Williams did manage to mount a comeback in the second half, utilizing strikes and submissions of his own. However, WALTER proved to be too much for the former two-time EVOLVE Tag Team Champion, as he ultimately choked out Williams to score the victory. This only went about nine minutes, but it was very solid from start to finish. I don’t think I’ll ever get tired of WALTER chopping the crap out of people. ***3/4

I was really impressed with how great Munenori Sawa looked coming out of EVOLVE 102, considering that he hasn’t been an active wrestler for several years. His outing the night prior got me excited for his singles match on this show against Jaka. This was another very good match that featured a ton of strike exchanges right from the opening bell. These two just went after each other with a variety of punches and kicks, which meant that the bout fit in perfectly with Sawa’s “Bachi-Bachi” style. Jaka had a strong showing here, and came close to winning at a few points, but eventually, Sawa caught Jaka in an octopus hold to score the submission victory. Much like the WALTER/Tracy Williams match that came before it, this particular bout didn’t go that long (clocking in at just over ten minutes). They made good use of the time they were given, however, and their efforts resulted in another really solid bout. ***3/4

Afterwards, the two men embraced, but after Sawa left, The End ran out and attacked Jaka. Chris Dickinson ran to the aid of his tag team partner, and a brawl ensued. Dominic Garrini tried to even the odds, but The End seemed to be too much. Then, it looked like The End was going to destroy Stokely Hathaway, but fortunately, Tracy Williams made the save, and Catch Point managed to clean house on The End. While there was dissension the night before, it appeared that Catch Point was back on the same page once again. With an EVOLVE Tag Team Title defense against The End likely to happen at some point, they need to be on the same page.

I still can’t get over just how thick the “Muscle Monster” really is. He also decided to take his boots off, I guess so he could be on a level playing field with Riddle? Anyway, before the match got started, Riddle took the mic, and proclaimed that going forward, all EVOLVE Title bouts will have No Rope Breaks. I’m perfectly fine with that change. Applying that stipulation to every match in EVOLVE (commentary has mentioned in the past few months that Riddle’s been pushing for that) would be going a little too far, but doing it for Riddle’s title defenses only is perfect. That means those bouts are guaranteed to be just a little different compared to the other stuff on the card, and that’s a good thing. It adds some variety to all future EVOLVE shows for sure.

As for this particular bout, it was a very strong main event, and a great first title defense for Riddle. It didn’t go too long, and there was plenty of hard-hitting action throughout, especially in the second half of the match. Riddle thrived in this environment, but at the same time, Sekimoto proved to be a really tough challenge for the new champion to overcome. Ultimately, Riddle put away the “Muscle Monster” via referee stoppage after two hard knee strikes and number of blows to the head. Riddle did a similar UFC style finish in a previous No Rope Breaks match, and we saw it again here. It’ll be interesting to see if that kind of ending becomes more common in Riddle’s title defense. As a whole, this was a great match from start to finish, and it was easily the best bout on the entire show. ****

EVOLVE 103 got off to a really slow start with the first two matches. Austin Theory/Keith Lee was incredibly underwhelming (especially given what was on the line), and Garrini/Thatcher was decent, but largely forgettable. Fortunately, the show got much better from that point on. The Four-Way Freestyle was super entertaining, WALTER/Tracy Williams and Jaka/Sawa were both very good, and the main event of Riddle/Sekimoto was great. While EVOLVE 102 was probably the better show overall, EVOLVE 103 still featured a number of matches that are worth checking out. With two new champions crowned in less than twenty-four hours, and with a couple of big names appearing to make their exits, it’ll be fascinating to see what happens in EVOLVE moving forward.