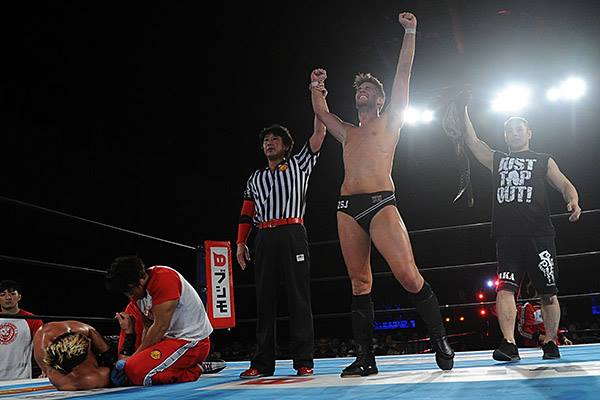 Kevin Kelly has somebody called Jango with him tonight to help with translation. I like WWE bashing as much as the next NJPW fan, but I’ve tried not to do it so much here. That said, this match is legitimately better than most singles matches I see on WWE pay-per-views. And it’s nothing particularly fancy, just a simple match with crisp technique, an uncomplicated story, and a clean finish. Singles matches feel like a big deal in NJPW because of their relative rarity, so Umino and Narita wrestle accordingly and give it their all within the time and technical constraints.

Umino continues to look like the top boy in the class, with the crowd cheering for him getting a rope break from Narita’s Boston Crab. Umino wins with his own Crab. This was the best match I’ve seen from this crop of Young Lions, and I’m struggling to think of a better one from the previous cohort, too. ***¼

Nothing special here, a short and inoffensive match. Kevin Kelly wonders whether the Freebird rule could apply to the NEVER 6-man titles, with Yujiro taking the place of the injured Tama Tonga. The other interesting subtext to this is comparing Oka and Umino, because for a while it looked like Oka was the golden boy, but I would say that Umino has risen above him in the pecking order. They’re very different wrestlers, however, with Oka’s suplex machine style really fun to watch during the short periods of offence he’s allowed. Nevertheless, he takes the L here after Yujiro’s Pimp Juice DDT. **¾

Any match involving the unholy trinity of Yano, Taichi and Iizuka is an automatic write-off for me. I actually love Yano against people like Kenny Omega and SANADA where they come up with creative spots, but there’s none of that here. The very worst of all three guys, and Ishii is powerless to stop the madness.

The SZG team get disqualified after a microphone shot or an iron claw attack, I don’t know, I wasn’t paying attention. Taichi drags the poor referee to the back after the match, presumably to torture him further by making him watch more Taichi matches. DUD

Bad Luck Fale joins Kevin Kelly on commentary and makes him an Honorary Tongan! A well-deserved accolade for the fifth-best TV announcer according to the WOR awards, but the #1 in my heart. I’ll also take this chance to plug the NJPW YouTube page. The post-match interviews are usually up a day later, and provide valuable insight into the relationship between wrestlers and the subtle feuds being built. One such aspect has been seeing Chase and Kota backstage, with Chase apologizing to Kota for losing matches, which is a nice touch that is helping to get Chase over as a babyface.

Chase and Kota's friendship continues to be one of my favorite parts of the new japan cup pic.twitter.com/aPGfzjuTdT

I wish he’d stayed as a Junior, because he does tend to get lost in the shuffle as things stand. A BOSJ run would do him well at this point, because he needs some singles success to consolidate his growing popularity. There are some fun moments, such as Chase going for a too-sweet and Ibushi responding with a hi-five, showing that Ibushi is Chase’s friend, but not necessarily all-in with the Bullet Club. They even have their own modified version of the Cross Slash.

It seems to me that Elgin has added a few new moves to his arsenal, and backstage has been talking about how he now fights for his son, Jax. Ibushi, as always, has no intention of phoning it in and is flying around inside and outside the ring, one of the many reasons why fans love him so. There’s a nice chemistry between him and Juice, making me want to see a singles match at some point. Juice pins Chase after Pulp Friction in a really good match. ***¼

Lots of crowd-brawling at the start which automatically loses a star. DBS drives YOSHI-HASHI into the barricade just in front of the announcers, and Fale asks YH if he’s okay. The fans are quite into Tacos as the babyface in peril. If he ever gets a new gimmick and some self-confidence, I think he could be more than just the CHAOS jobber. The Butterfly Lock also looks crap, so that needs to go.

Goto and Sumisu have some good chemistry, but KES end up winning after hitting the Killer Bomb on YH. Kevin Kelly throws shade at The Bludgeon Brothers for stealing KES’s move. **¾

Naito is still avoiding Suzuki’s evil eyes, while Despy and Hiromu are playing with each other’s hair.

Taichi is on Japanese commentary and appears to have his earbuds in, probably listening to his own entrance theme. It’s a good song so he can have that. Suzuki appears to be torn between feuding with Okada and Naito, but an Intercontinental championship match between he and Naito at Sakura Genesis seems most likely as I would imagine Okada will have his hands full with the New Japan Cup winner, which I would guess will be Hiroshi Tanahashi. Suzuki goes after Naito with a chair throughout this match, while Despy tries to unmask BUSHI. Naito wins after pinning Despy from the Destino in a good match.

There was a fair bit of crowd brawling but Hiromu was very energetic, and the Suzuki/Naito spots were interesting as the two conflicting characters, the sadist and the rudo, play off each other really well. ***

The crowd still adores Tanahashi. Just watching the post-match scenes after he beat Juice, I was mesmerized seeing him walk around the outside of the ring, hugging fans who were besides themselves with emotion (any wiping his sweaty face on their towels, which I don’t really understand). I get the feeling that they are desperate for him to have (at least) one more run as IWGP champion, and there is a certain frisson when he and Okada interact.

Perhaps Tanahashi is the only person capable of dethroning the mad king. Many people might say that their feud was perfect and they shouldn’t face each other again, but they can’t avoid each other forever. Chuckie T, for his part, is absolutely killing it with the funny Tweets. His wrestling, on the other hand, has been hit and miss on this tour. Finlay gets a rare win after a backslide on Chuckie T. The Okada vs Tanahashi moments, obviously, were the highlight of this match. That said, it’s great to see Finlay pick up a win in a big match, because he’s been working extremely hard this year and is one of the most underappreciated members of the NJPW roster. Tanahashi looks like a proud father at the end of the match. ***

.@THEdavidfinlay WITH THE BACKSLIDE GETS THE VICTORY FOR HIS TEAM WITH @tanahashi1_100 #njcup #NJPW #NJPWWorld pic.twitter.com/OYsXt2ughN

The opening phase of this match is very compelling, with SANADA having the strength advantage but Zack using his technique to work into superior positions.

The crowd are silent to begin with but gradually get behind SANADA. Both guys do a great job in making it look like a real grappling match. SANADA is beginning to work little spots into his match to pop the crowd, which he needs to do a lot more of as a lot of people seem to be jumping off the Cold Skull bandwagon.

.@zacksabrejr is a very smart person, don't wait for the other wrestler to jump on you. JUST MOVE! #njcup #NJPW #NJPWWorld pic.twitter.com/NT77kCHWeu

About ten minutes in, the crowd once again lapses back into complete silence, which might be a cultural thing but might also mean that they’re not really into the match. SANADA spends a good few minutes in control using the same rest hold, which doesn’t really play to his strengths, but the crowd comes to life as ZSJ takes over. SANADA definitely gets the best crowd response as the babyface in peril, which is what I think worked for the tag-team with EVIL. There’s the added caveat of ZSJ being able to win with a wide range of submission moves, so any hold he locks on deep into the match is a potential match-winner and carries a sense of danger for the opponent. Zack gets put in the Paradise Lock, which is a bit disappointing as I’d expect him of all people to have a counter for it. There are a couple of really close near-falls, which is a nice twist with two guys that mainly work submission finishers.

The story plays out that ZSJ, as usual, has counters for the TKO and the moonsault and finally works them into a dramatic finish. Every time SANADA reaches for the ropes with a spare limb, ZSJ manages to bend it into a new and more excruciating manoeuvre. The way Zack snuffed out each of those mini hope-spots made for a really exciting finish.

SANADA GIVES UP!!!!!!! @zacksabrejr IS IN THE FINALS OF THE NEW JAPAN CUP!!! #njcup #NJPW #NJPWWorld pic.twitter.com/xgXHNc4Icr

Backstage, ZSJ says that the only thing holding Tanahashi together is hairspray and athletic tape, and Zack is going to put Tana out of his misery. He also throws in some Mighty Boosh quotes for good measure. It’ll be the rubber match between them this Wednesday in the New Japan Cup final. This match was a bit longer than it needed to be and had a few dead spots midway through, but improved in the last ten minutes or so and had a great dramatic finish. ****¼

A decent undercard and another really good main event continues this excellent New Japan Cup tour. ‘Shuyaku Killer’ Zack Sabre Jr. feels like a serious threat having taken out a murderer’s row of Naito, Ibushi and SANADA, and continues his string of excellent main events which are a welcome change of pace from the usual high-impact NJPW style. SANADA also impressed with another strong main event babyface performance. Fale added nothing on commentary, aside from saying that people all looked the same and others had punchable faces, a real missed opportunity to add some insight. Tanahashi v Zack Sabre Jr. looks terrific on paper and is a final that makes total sense, but not one that most people would’ve fantasy booked when the brackets were announced. Gedo does it again, well-deserving of his WON Booker of the Year landslide victory. Okada v Tanahashi seems the more likely outcome, but Okada v ZSJ would be a really interesting stylistic matchup, which would also make sense of Okada using the Cobra Clutch in an effort to brush up his submission game. And so, we wait with anticipation until Wednesday’s truly unpredictable final. 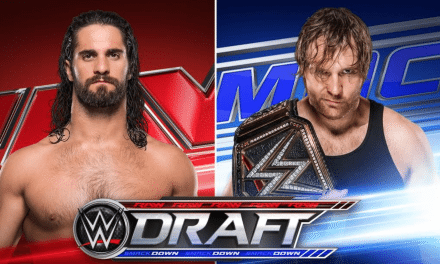