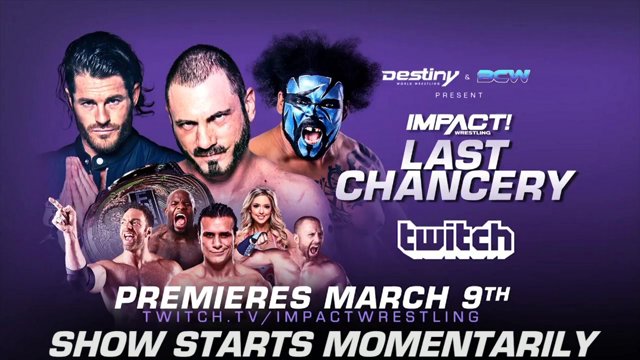 We’re in Mississauga, Ontario at the Don Kolov Arena for Impact Wrestling’s latest Twitch TV exclusive, presented in cooperation with Destiny World Wrestling. The event, entitled Last Chancery, is headlined by a triple threat for the Impact World Championship, with Austin Aries defending against Kongo Kong and Matt Sydal.

Much like last month’s special, Josh Mathews is joined by Scott D’Amore on commentary. I personally quite enjoy D’Amore’s work, although him playing the role of heel to Mathews’ face didn’t really work.

Clocking in at around 12 minutes, this was a relatively lengthy opener that never really got going. There were some entertaining exchanges, but most of the contest was structured around Dux’s superiority on the mat. Technically sound it may have been, but engaging it wasn’t. That said, the match was an effective way to further Sutter’s recent heel turn, with his new-found aggression and snappy behaviour getting him caught, with Dux locking up a Boston Crab in the middle of the ring, leaving him no option but to tap. **1/2

In early January it was announced that Impact had signed Gama Singh (Stampede wrestling mainstay in the 70s and 80s, also Jinder Mahal’s uncle) as a manager. That news was followed by the announcement that he would be forming a new stable in Impact, known as the Desi Hit Squad. This faction would be made up solely of Indian talent, announced to be Rohit Raju (who won the Global Forged competition last year as Hakim Zane), Vikas Kumar, Bhupinder Singh and Gursinder Singh. Raju has had a couple of outings on Impact so far in 2018, but this was our first look at the faction as a team. Their opponents – Deaner and Something – are no strangers to Impact either. Deaner was signed to Impact in 2009 and throughout his 10 month tenure with the company he became a prominent figure in the Women’s title scene (don’t ask). Something, on the other hand, was part of the Global Forged series.

The match itself was very basic that served as a relatively underwhelming debut for the Desi Hit Squad. They firmly established themselves as heels, with repeated double team attacks and spitting at their opponents, whilst the match ended with Gursinder Singh pinning Something after Raju held his legs down. The most impressive element in the match was Something, who showed great presence and athleticism. **1/4

One of the Twitch live comments during the show read ‘Petey looks like a cross between Tony Nese and the Hurricane’, and that is a description I still can’t get out of my head.

There were entertaining elements to this bout, but it never really clicked. At just over 15 minutes it felt a bit long in the tooth, and there were too many instances of guys waiting on the outside for my liking, but there again I don’t care much for multi-mans, so I may be a tad harsh. Petey unsurprisingly picked up the victory after hitting a Canadian Destroyer on Atlas, but the real star for me was Brent Banks. His offence was crisp, he looked tremendously athletic and would be a welcome addition to the X-Division. ***

I have to admit, I was really disappointed by this. Both men are exceptionally talented and I thought with Lee getting more time than he normally does on Impact, they would be able to produce a really entertaining contest. They lacked chemistry though, and a disappointingly quiet crowd obviously doesn’t help with that. Whilst the closing stretch brought my rating up, it all felt a bit movesy and didn’t have a story or flow to it. For what it was I enjoyed it, but I was left feeling a little dejected at its conclusion. **3/4

Burke is a staple of the Maritimes in Canada, but this was my first time seeing him. As a self-confessed Eli Drake superfan, I was convinced this would be entertaining and it was the best match to date. At around eight minutes it was worked at a clip that allowed Burke to get his offence in, but also allowed the story to play out that Drake was just that bit more experienced and that bit better. One thing I did notice in particular was just how much more confident Drake is in the ring than when he first signed with Impact in early 2015. Not only is he more ambitious in his offence, but his counters and timing have also greatly improved. He picked up the win after raking Burke’s eyes and landing a Gravy Train. ***

For the second Twitch show in a row, Alberto El Patron appeared to work at a level somewhere near 100%. I’ll admit to not being a big fan of his work, but this match and the one in February against Fallah Bahh showed a motivated El Patron. There was a bit too much action on the outside, and the finish was goofy with Moose falling into the ‘dumb babyface’ mentality of celebrating too much with the crowd, allowing Patron to clip him on the ropes and land the double stomp for the win. The finish takes my rating down slightly, but this was good and considerably better than the highlights Impact showed of another match between the two a few weeks back. ***1/4

KC Spinelli is fantastic. There, I’ve said it. As a regular on the Canadian scene she got a lot of appearances during the tapings at the end of 2017 and she impressed there, but this was a really entertaining contest where she came away strengthened by defeat. The two of them work well together, which obviously helps, but Spinelli carries herself like a star and made this feel important, despite the fact it was little more than a seven-minute sprint. Allie secured the victory with a superkick but the real story was Spinelli. Callis, D’Amore – SIGN HER UP! ***

I said this on this website’s very rambunctious Slack, but this might well remain the weirdest three-way I see in 2018 (I’m aware that sounds very questionable). As much as I’m disappointed Kong ate the pin in this one, he looked dominant in his first big main event slot since joining Impact and I hope that that’s a sign of things to come now he’s been paired up with Jimmy Jacobs.

The opening exchanges were quite slow, with Sydal spending most of them on the outside, but the match stepped it up a gear once Kong applied a double bearhug. Yes, it was a stupid spot, but it got the crowd firmly behind Aries and Sydal and from there on out they mostly worked in tandem to isolate Kong, firstly by clotheslining him out the ring, and then by repeatedly landing strikes to his lower body. Sydal looked to have potentially nicked a win with the shooting star press, before Aries scuttled him out of the ring, landed a 450 splash of his own and successfully retained his Impact World Championship. A fun main event. ***1/2

An entertaining house show. That’s the easiest way to describe Impact’s second Twitch exclusive. The production was improved on last time and the match quality was much more consistent, with nothing being bad and the eight matches all having sufficient time to breathe. Check out the main event if you’ve got the time, and perhaps also the women’s match to prove that I’m not the complete high man on KC Spinelli.

The next one of these Twitch specials – the big Wrestlecon show, Impact vs Lucha Underground. With Desmond Xavier, DJZ & Andrew Everett vs Drago, Aerostar and King Cuerno as the first match announced, I’m all in.