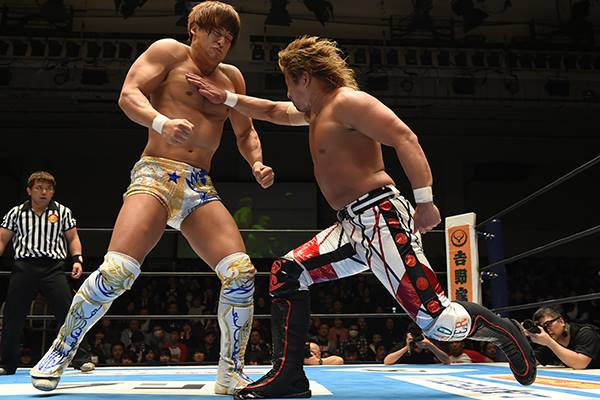 Every #njpw show starting with Young Lions is like getting home and changing into your best soft pants – sets the proper tone for all to come.
Yano being involved is like the day you realize those pants are dirty. #njpw

There are two new unidentified Young Lions ringside, and I think Minoru Suzuki can smell them already.

Tomoyuki Oka, looking like a giant baby, goes straight for Goto at the start and shows some impressive fire. Yagi wants some too, tagging himself in to Oka’s chagrin, but quickly gets isolated and beaten down by the CHAOS trio. It’s quite strange seeing Yano playing the heelish bully, going for a disrespectful one-kneed cover. Oka is showing real passion in the this match and the crowd are solidly behind him, perhaps showing glimpses of why he was so highly rated prior to his debut. Umino also gets his chance to impress with some nice high-paced offense, despite quickly eating the pin from Chuckie T. Goto taunts a frustrated Oka after the match with his NEVER Championship belt, perhaps hinting at a feud somewhere down the line. A surprisingly intense opener, albeit a short one, with Oka and Goto’s chemistry elevating this above being a mere squash match. ***

Lance Archer’s pre-match water-spraying shenanigans seem to go on for about ten minutes, including him assaulting a woman who was trying to hide under her coat. Archer is goading Fale at the start as a precursor to their upcoming tournament match tomorrow. Lots of brawling in the crowd, with Fale taken out of the match early in a barricade spot before KES isolated and eventually beat Loa, who played the de-facto babyface-in-peril as the smallest man in the match. An unremarkable match that mainly served to build to tomorrow’s Archer v Fale contest. **¾

Taka gets on the mic before the match and puts over ZSJ’s chances against Naito on Sunday.

TAKA took a poll of who fans think will win the cup, and who will win out of Zack and Naito. TAKA says Zack’s submission mastery will see him through. #njcup

Chuckie T joins Kevin Kelly on commentary, and Chuckie of course has his own history with ZSJ with their PWG feud. Chuck is ostensibly there to scout his upcoming opponent in the tournament, SANADA. Despy has a sparkly gold new mask, and BUSHI is sporting a snazzy pink number. Chuckie is at his self-deprecating best on commentary, so this match is worth watching for that alone if you’re into his idiosyncratic sense of humour.

Lots of crowd-brawling, as ZSJ goes after Naito’s shoulder, possibly setting up the story of Sunday’s match. Chuckie starts talking about how he’s going to kiss SANADA as Despy attacks the Cold Skull with a notebook.

Despy hits Sanada with everything in the book #njcup #njpwworld pic.twitter.com/Im0ufvJ6ke

ZSJ looks strong, with some brief but exciting exchanges with Naito followed by Zack getting the submission win over BUSHI. On his way to the back, ZSJ tells Kevin Kelly, “Taka Michinoku’s my hype man. Think about that.” It’s a great addition that will hopefully push ZSJ to the next level. ***

Tanahashi is back with a new hairstyle copied from Selphie from Final Fantasy VIII.

Suzuki goes straight for Tanahashi’s bad knee, so it appears their feud isn’t done yet, with a rematch at Dominion a possibility. I daresay Taichi may take advantage of Tanahashi’s injury in their tournament match tomorrow. More ubiquitous SZG crowd-brawling and chair antics, with the new Young Lion getting his contractually-obliged Suzuki beating to the surprise of absolutely nobody.

The story of the match is Finlay getting choked with various foreign objects. Suzuki, who is having a terrific 2018, softens up Tanahashi for Taichi, who eventually gets the pin over Henare. Suzuki gives Tanahashi a bit of a kicking on the outside after the bell for good measure. A fun match that built up both the Tanahashi/Taichi and Tanahashi/Suzuki feuds. Tanahashi has lost three first round New Japan Cup matches in a row, for what it’s worth. ***

Ibushi has never lost a New Japan Cup match, and is the fans pick to win it again this year following his 2015 victory. The Owens/Ibushi pairing is interesting in and of itself, as it seems to suggest that Ibushi has become an honorary Bullet Club member.

Chuckie comments that Okada’s constant stream of success has turned him into a weirdo. I’m trying hard not to just write down things that Chuckie is saying on commentary because I’m finding him so amusing that it’s actively distracting me from the matches. Chase gets some time to shine here, building on his impressive year with some nice exchanges with YOSHI-HASHI, even taunting Okada with his version of the Rainmaker pose. I like to think that he’s been hanging out with Kenny and Ibushi in his free time.

I gotta give it up to the birthday boy @realchaseowens for keeping the peace while I’m gone. We got you your own music, big raise incoming.

He seems to be deliberately antagonising Okada for some reason, possibly setting up Chase for a G1 win and title challenge at Wrestle Kingdom 13. There are also some tantalising Okada vs Ibushi moments, the latter selling the former’s offense like Shawn Michael did to Hulk Hogan at SummerSlam 2005.

Chase is really good here, bravely holding his own against Okada before eventually tapping to the Cobra Clutch, which should really be called the Million Okada Dollar Dream, or the Million Yen Dream. YH and Ibushi have a pretty lukewarm faceoff after the match as YH just stares at him awkwardly, appearing to actually make Ibushi laugh. Okada gives Chuckie a fistbump, which I suppose means they are the new Best Friends. ***¼

Yujiro come out with a lady she’s wearing is slightly less ridiculous than Juice’s Rastafarian Care Bear outfit. This is a repeat of last year’s opening round match, with Yujiro playing the early gatekeeper role, like the first boss of every beat-em-up video game. Personally, I’d like to know Yujiro’s thoughts on the Kenny/Cody situation, because he’s surely going to play a decisive role in the future Battle of the Bullet Club, like the Riders of Rohan or The Knights of the Vale, depending on your preference. This is a surprisingly hard-hitting affair, with Juice turning the colour of Cabernet Sauvignon as he takes some nasty bumps, including one on some plastic chairs that slice open his back and put Yujiro in control.

Juice is clearly above Yujiro in the NJPW pecking order, so this is a smart way to believably get Juice into the babyface-in-peril spot. There are some great near-falls here, and Juice’s facial expressions are some of the best in the business at generating babyface reactions from the crowd. Yujiro almost dangerously botches a Tokyo Pimps attempt late on, successfully landing it seconds later in devastating fashion.

The final few minutes are a genuinely exciting back-and-forth contest that get the crowd going, with Yujiro putting in his annual terrific performance before going back into hibernation. This might be his best singles match since the Ishii NEVER title match at King of Pro-Wrestling 2014. I’ve also really missed Juice Robinson singles matches. He still seems to be improving. He has words with Goto on his way to the back, and admits to being an idiot for looking past Yujiro. ****

Two big boys doing big boy things. They spend the first few minutes smashing into each other like I used to do with my Hasbros. Ishii is surprisingly doing the disrespectful kicks and slaps, perhaps trying to provoke Elgin into losing his cool.

The story seems to be that both men are equally matched in terms of striking, strength and grappling, and so it comes down to a shear test of conditioning (or fighting spirit, if you like). They basically beat the shit out of each other for half an hour. Ishii starts to fade late on, and takes an ungodly amount of punishment from Large Michael but continues to hang on by the skin of his teeth. This turns into one of those ‘stay down’ kinds of matches, as Elgin uses all his big moves and becomes increasingly exasperated as Ishii keeps kicking out. Elgin hits a terrifying Splash Mountain from the top rope with Ishii appearing to land on his head.

It actually looks like Ishii is seriously hurt, as Elgin clearly asks him if he’s okay. This match escalated quickly from, “Eh, it’s not as good as their G1 match,” to, “JESUS CHRIST, they’re killing each other.” Elgin is frighteningly sloppy, nearly dropping Ishii on his head a second time in a Buckle Bomb attempt. The last couple of minutes are filled with real drama, with a palpable sense of relief that Ishii seems unhurt mixed in with the trading of finishing moves and near falls. Elgin wins, but looks seriously guilty afterwards, offering a helping hand that is rejected by Ishii.

After a genuinely scary match, Elgin is back in the mix and will go on to face Juice Robinson on Wednesday. ****¼