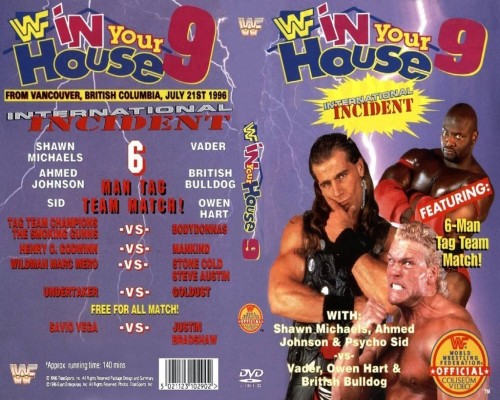 One of the key objectives of In Your House, a short PPV event on an increasingly tight budget, was augmenting an ailing franchise’s presence in a cost-effective way. As the neighboring country to the US, Canada was the next natural step in the process, as the darkest hours before the WWE’s glorious dawn ticked by. Following the first Canadian event in September 1995, In Your House returned to Canada after a nine-month absence, landing in Vancouver on July 21, 1996. By the time In Your House 9: International Incident aired, The two Hart brothers Bret and Owen, Diesel and the British Bulldog were still the federation’s leading lights, and perhaps the only true draw for audiences in the WWE’s dark days of the mid 1990s.

Despite the gloom of the immediacy, some of the defining characters of the upcoming Attitude Era were coming into their own – no more so than Shawn Michaels, who had just won his second consecutive WWE Royal Rumble. Only six events were scheduled, opening with Justin Bradshaw’s win over Savio Vega. After The Bodydonnas had dispatched the Smoking Gunns in a tag match, future cult hero Mankind beat Henry O. Godwinn before things got serious. Stone Cold Steve Austin had yet to become the fully-fledged beloved badass that the world knew by the turn of the century. However, his days as a Hollywood Blonde, and the babyface “Ringmaster” were long behind him by the time “Austin 3:16” took on Marc Mero in the fourth match of International Incident.

Mero, whose boxing record has been preserved by Boxrec to this day, presented himself as the epitome of macho. His boxer gimmick is one of several reasons why the lines between WWE wrestling and MMA are so blurred these days. Today, MMA fighters such as Conor McGregor, who is (as of March 2018) priced by Betway as a -188 favourite to beat Tony Ferguson in a possible future bout, have the same degree of brashness generally expected from pro wrestlers. Mero was no exception to the rule back in 1996, and he dominated Austin, but to no avail. Naturally, it wouldn’t be a PPV event without some sort of controversy, or any catalyst to a new feud. Controversy was the order of the day when timelessly seasoned veteran The Undertaker took on Goldust, a relative newcomer to the spotlight whose attire and demeanor was unrivalled in its extravagance.

Goldust had, by virtue of interference from fellow “Taker-haters” in Mankind and Paul Bearer, beaten the Undertaker in a casket match two months previously. Without the protection of a no-disqualification rule this time, Goldust was outclassed by The Undertaker, but Mankind would again prevent the latter from winning. This time, he emerged from underneath the ring to take the Undertaker out of the match, but unwittingly hand him the win. The two would later brawl through the arena and into the boiler room, establishing Mankind as The Undertaker’s new nemesis for the foreseeable future. A predominantly Canadian crowd finally heralded the presence of its greatest wrestling siblings in the last bout of the evening.

Managed by Jim Cornette, Owen Hart appeared alongside the British Bulldog and Vader in a heel stable that clearly valued power over speed, but the opposing trio also had its musclemen, with the popular Sycho Sid fighting alongside Ahmed Johnson. Shawn Michaels, in the process of becoming one of the WWE’s most successful and loyal athletes through uncertain times, completed the lineup. Once again, underhanded tactics were needed from Cornette’s stable to outfox a superior outfit, with Shawn Michaels showing exactly why the WWE could still compete with its main rival WCW. Yet, an inspired performance was rendered meaningless when Jim Cornette incapacitated Michaels to give Vader and his crew a win via pinfall. Michaels, now so popular that his claim to fame now even extends even to Ice Hockey, would get his revenge a month later at SummerSlam, embarking on a golden personal period, before becoming part of the iconic D-Generation X stable.

Although In Your House was not for everyone, it stands as living proof as to just how much can change when all appears lost.