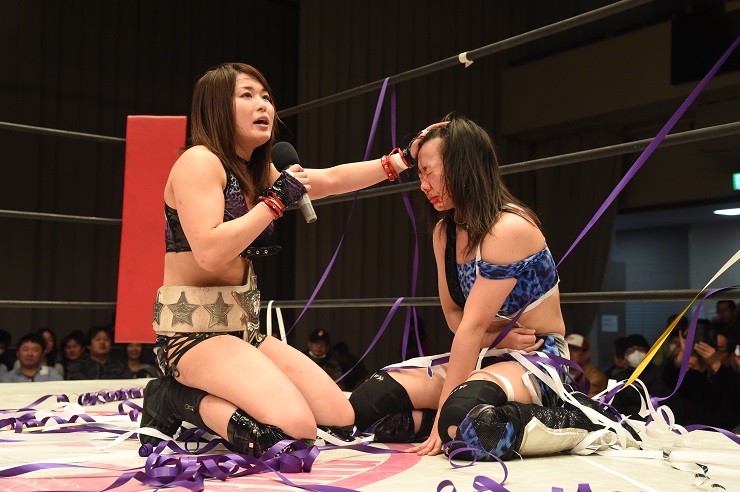 It has been awhile since I have posted a review for Voices of Wrestling, and figured I was long overdue to return. No better time than for a big Stardom event, which features both a “dream match” between Meiko Satomura and Toni Storm and a potentially career-making match for the young Momo Watanabe. Before I get any hate mail, even though “Queen’s Fest” makes more sense and that is how some sites have it listed, Stardom’s official website has it as “Queen’s Fes” so that is what we are rolling with.

Joshi wrestling has a reputation for having wrestlers start really young, and while that isn’t true of all Joshi promotions, it certainly fits in Stardom. Stardom shows generally start with ‘rookie battles’, using ‘rookie’ in the broad sense of not just wrestlers in their first year but really young wrestlers as well. Normally its vet/rookie vs. vet/rookie but they mixed it up here, having three rookies vs. two veterans. As an avid Stardom watcher I appreciate them mixing it up but the end result is the same – a shortish match with the veterans winning rather easily.

Konami and Kaori are too good to be wrestling 13 year olds so its disappointing in that regard, but Hanan and Ruaka aren’t bad for their age and the action generally was crisp. An above average Stardom opening match, but still pretty average overall even though I adore Konami (seen below, she’s the only official trainee of current WWE wrestler Asuka).  **

13 year old Hanan gets her shot in, but Konami has the last laugh. pic.twitter.com/yMOEY3T9hM

The famous ‘catch-all’ match, where all the other wrestlers under contract are thrown together in one big cluster. This was an Elimination Tag Match and I have to be honest – it was more entertaining than I was expecting. Skill-wise, Miranda lags behind everyone else and it showed a few times, but its easier to hide a wrestler’s faults in a ten minute match with seven other wrestlers. Starlight Kid and Xia are both young and exciting, and Nicole Savoy was a great addition for this Stardom tour. This is one of those matches where no one wrestler really got a chance to shine too much since it was too chaotic, but it still was entertaining as a fun casual watch. **3/4

A couple highlights from the Four Way Elimination Tag Team Match in Stardom. Nicole Savoy and Xia Brookside were on fire. pic.twitter.com/UA6TTyD9dA

I’m one of the few Stardom fans, apparently, that doesn’t particularly enjoy either of these wrestlers. Maybe I am old and grumpy but Hiromi’s comedy doesn’t really resonate with me (although I do admit she is good at it) and Natsu is 90% shtick (again, I admit she is good at it). So this match was set up to be 95% style and 5% substance, since neither of them are known to be in-ring technicians.

The match went pretty much exactly as I was expecting and somehow felt long for a seven minute match. I’m always torn officially reviewing matches like this as one part of my brain recognizes the purpose of matches like these (change of pace, attracting different fans, etc.) but the other part of my brain wants to skip the match altogether. Since I am fan of weapons being used randomly in wrestling I do support Natsu whipping Hiromi repeatedly, but that was the lone bright spot. A good example of a match I don’t mind being here but not one that I really cared about, just watchable ho-hum mid-card filler.  **

Natsu Sumire is out of control, but that's the way she likes it. pic.twitter.com/Fgx1Wb585e

Now we are getting to the good stuff. These two teams have a long history which I won’t fully dive into in a review, but suffice to say this is more than just a title defense. Mayu has been feuding with Oedo Tai since 2016, with many battles against Kagetsu. Tam used to be in Oedo Tai but was forced to leave the group, she then joined up with Mayu. This match was too short, but they did a lot with the time they had as they managed to tell two distinct stories. Tam Nakano’s story arch will continue as this was just a baby step, as the ending was conclusive but can branch off into many different directions.

As a general rule, matches start slow and build to a climax, but in this match they did the opposite. The match started super hot and I loved the frantic pace and urgency shown by Mayu and Tam as they dominated the first portion of the match, but it did slow down once Oedo Tai took over. The story here of Tam trying her damndest but not being good enough yet was well done and Hana was really great both in her move execution and expressions. I am not the first to say this but Hana is absolutely a future star in wrestling, she has the right combination of skill and charisma that most wrestlers would die for. For a short midcard title defense, they really delivered an exciting and entertaining match while leaving room for the story to continue down the road.  ****

Billing a match as a “dream match” is setting high expectations to the point where if the match isn’t a banger, fans will be disappointed. Toni Storm has been almost unbeatable in Stardom since she started wrestling in the promotion in 2016, and came into this match with two singles titles in Stardom. Meiko Satomura is a legend and wrestles out of Sendai Girls’, so it was a ‘dream match’ in the sense that its a pairing between two top wrestlers from different promotions. The fact no titles were on the line, and they weren’t the main event, foreshadowed pretty harshly that no one was winning this match, which is exactly what happened.

Somewhere hiding within this match was a great epic match just waiting to come out, but it never did. Part of the issue, as I mentioned above, is that everyone and their mother knew this match would be a draw. Now matches can overcome that, being predictable doesn’t automatically equal bad, it just makes it harder. The beginning mat work dragging wasn’t a big deal, but it felt like it went from the feeling out process straight to trading finishers without much ‘meat’ to the match. That isn’t to say it was bad, I’m just explaining why it wasn’t the epic I think these two could have based on their talent. They are both super smooth wrestlers with killer strikes, and I loved Toni’s suplex to Meiko. I can’t remember the last time someone avoided the cartwheel kneedrop, so that was a pleasant surprise, and for their first match against each other they have solid chemistry. Certainly a good match but these two could do so much more, hopefully they get a chance down the road.  ***1/2

While it may not have matched its "dream match" billing, Meiko Satomura and Toni Storm still put on a show. pic.twitter.com/ujJQHX88Wx

VOW writer JoJo Remy was live at this event, and after it was over he came into our rambunctious VOW Slack to discuss the show. I thought he’d come in talking about Toni, or Meiko, or Io. But it wasn’t any of them he was talking about, it was about 17 year old Momo Watanabe. At first I thought he was delusional to come out of the show talking about Momo of all wrestlers but I generally trust his opinions on wrestling, so I thought maybe he was onto something. And he was right. Momo hasn’t ever had that “great” memorable match, she has been a serviceable midcarder that was constantly improving but never seemed destined for stardom (pun not intended). But this match may have not only changed my opinion of Momo but may have changed the opinions of many fans that now see what she is capable of.

This was a great match and honestly I didn’t know that Momo had this in her. Io Shirai gets a lot of credit for that as she is the best in the world but Momo was on point from start to finish, hitting everything under the sun to try to keep Io down. I expect Io to have great matches, but I don’t expect her opponents to always be able to keep up with her like Momo did here. Io did her usual superwoman act at times but I’ve never had an issue with that, the Ace is supposed to be incredibly difficult to keep down for the three count. But they still wrestled with a purpose as nothing felt like filler and I stayed on the edge of my seat watching it, rooting Momo on even though I knew the result. A must see match and my favorite Stardom match of 2018 so far, I’d recommend going out of your way to see it.  ****1/2

Easily the best match in her young career, Momo Watanabe gave it 100% against Io Shirai. pic.twitter.com/cdaXNNakmh

After the match, Momo Watanabe was bleeding everywhere from a badly cut lip, and was crying as Io tried to make her feel better. The image went around social media and blew up a bit, so I hope that this show getting more attention than usual will bring people’s attention to how truly great this match is.

Stardom’s events can almost always be split in half as their show structure is very predictable. Their undercard suffers due to the fact they have so many young wrestlers and they don’t leave wrestlers off cards if they are healthy. So you’re always going to get the rookie match and the big gaijin tag match, that’s life in the Stardom World. But once you get past that, Stardom has some truly amazing wrestlers that would blow the roof off any building in the world if given the chance. Both title matches here delivered, not only in execution but they also left the stories open so no one will be left behind – the stories of Tam Nakano and Momo Watanabe will continue to grow. Whether you watch it on Stardom World or find the Samurai TV version, the second half is certainly worth tracking down, particularly the main event. 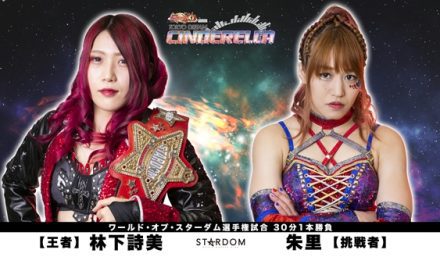