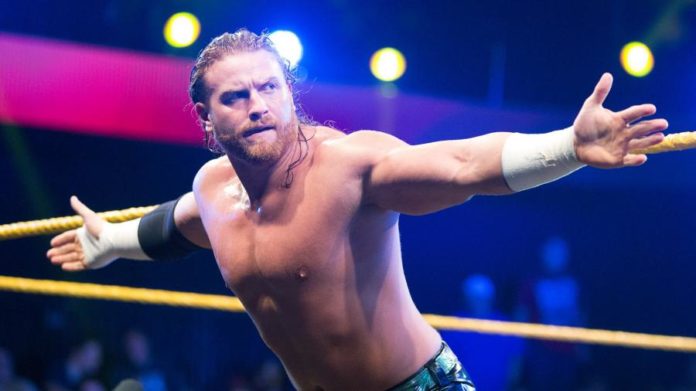 Last week on 205 Live, General Manager Drake Maverick announced via a well put together video package the imminent debut of Buddy Murphy. Yes, the former NXT Tag Team Champion is finally making his main roster debut as a member of the Cruiserweight division.

And I’m going to say it outright… Buddy Murphy is the most underrated wrestler in the world today.

Murphy started his career back in 2005, working in the Australian independent scene. While honing his craft, he picked up the Melbourne City Wrestling (you may have heard about them thanks to their recent partnership with New Japan Pro-Wrestling) Heavyweight Championship and had a great reign on top for a total of 293 days.

Then he took a gamble on himself and flew himself from Melbourne to Orlando for a four-day WWE tryout six years ago.

The four days of drills went by quickly for the young hopeful, but in the end, it was all worth it when he was picked up as the newest member of the WWE NXT roster.
After making the move from Australia to sunny Orlando, Murphy soon gained attention for his great fundamentals and the willingness to learn at the training facility. He was paired with fellow tryout hopeful Wesley Blake and NXT soon had to deal with the Blake & Murphy Factor.

January 28th, 2015 – history was made when Murphy and Blake won the NXT Tag Team Championships from The Lucha Dragons in a pretty good match. Murphy shone in the match, showcasing a rare display of athleticism mixed with strength for a recipe of success.

And we shouldn’t forget that undeniable star quality that he possesses.

… and then they lost the titles to The Vaudevillians, split up the team, and both men vanished from NXT television. Buddy had a match here and there for the black and yellow brand, but he was never used to his fullest capacity.

His talent was used to help grow the starship of guys like Bobby Roode, Elias Samson, Tye Dillinger, Shinsuke Nakamura, and Kota Ibushi. He made the biggest NXT superstars shine like diamonds all while he kept being underutilized and underappreciated by the wrestling world.

At the time, he was NXT’s best kept secret.

But remaining a secret is not at all a bad thing. Since losing the NXT Tag Team titles, Buddy Murphy has had the opportunity to grow even further as a competitor. His skillset is at a level not many in the history of the business ever achieved.

Excellent in-ring ability? He’s got it.

Charisma? Got it for days.

That star quality that can’t be taught? Loaded with it.

Blood, sweat, and tears to show appreciation for the art of wrestling? He’s done that too.

Now, after years of hard work and dedication, the secret is finally out.

Buddy Murphy is the next big thing.

Buddy Murphy is the future of 205 Live.

Griffin is a writer at Voices of Wrestling who enjoys wrestling. Follow him on the Tweeter @Hollywd12.