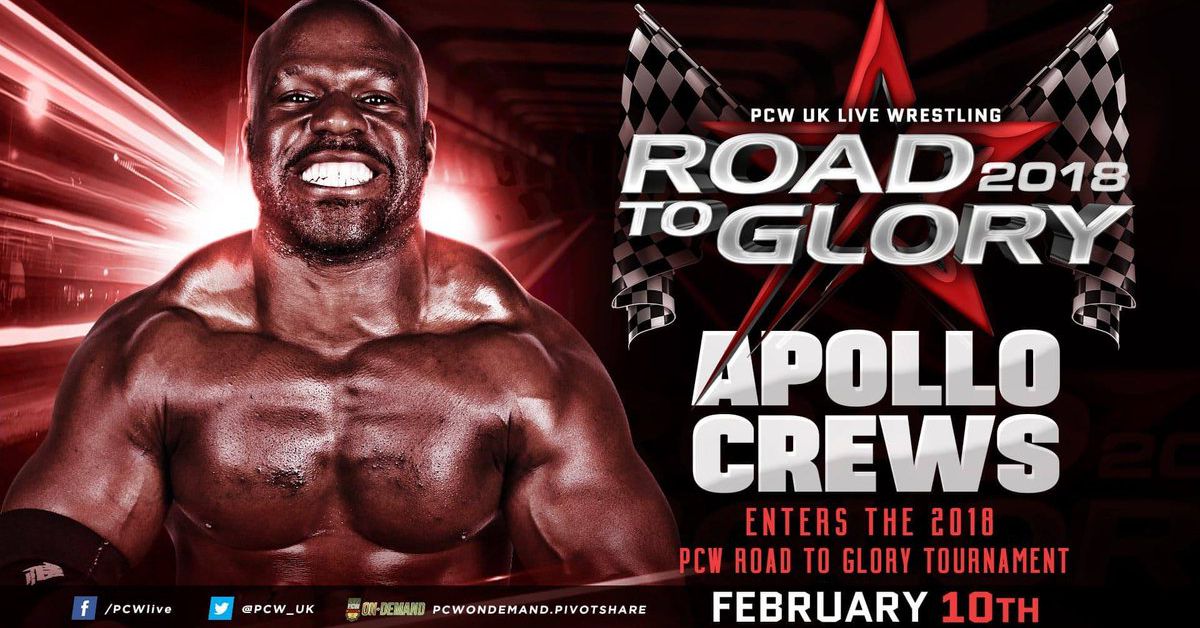 We’re in Preston at Evoque for the evening show of Road to Glory. The afternoon show saw a tremendous Zack Sabre Jr vs. Matt Riddle match headline and set up the semi-finals and finals of both the Road to Glory tournament and the tag team title tournament. WWE’s Apollo Crews is through to the semi finals, and joined by Zack Sabre Jr., Dean Allmark and Moose.

These two have never met, according to PCW commentary. I know of at least two instances where they have wrestled but one was a tag and the other was a four-way. So it might be their first singles match. Both guys are very technically savvy. Sabre has the edge there but as with earlier Allmark has the weight advantage. Sabre has had far less recovery time but he’s a machine so it’s not an issue. The biggest issue this match faces is coming on the back of Sabre-Riddle, which was incredible. This is good but not as intense or as well executed. The near falls sequence is a beauty though.

Sabre usually has his way with opponents but here it’s more even with Allmark never allowing himself to get put in compromising hold, constantly battling out of potential submissions and keeping Sabre on his toes. The ending is abrupt with Allmark pulling a pinning combination out of his ass and catching Sabre by surprise. This was really solid. Allmark heads to the final. ***3/4

This takes ages to get going because the crowd are so loud. You can’t beat a rowdy crowd! They could get away with not wrestling at all. Sometimes I wish acts would just do that. Milk the crowd for all its worth and then just go to the finish! Brooks looks really good here. I’m genuinely impressed with him. Both for performance and appearance. He looks like a star in the making. It’s a pity he’s selected “Brooks” as a surname, with Chris and Adam out there, but apart from that I’m hyped. Big T floors Sugar D and Banham gets the pin. This was relatively quick, thanks to all the pre-match chanting, but the heels do have another match to go. Given how over Sugar Dunkerton was here this may have been an error. We will see. **1/4

Charlie Sterling isn’t on the same page as Ashton Smith, the big goof-off. However Ashton does come in prepared for Rampage Brown, having teamed with him elsewhere on the indies. So maybe Charlie should trust in his tag team partner? Unlike the last match everyone here is experienced, talented and probably underrated (although I think Rampage is well liked everywhere). It feels like a real step up in quality.

Charlie is all over the place here. I have no idea what he’s going for but at one point he throws Team Single over the top and celebrates because he’s “going to Wrestlemania”. Then he hits a crazy dive. The tone is just weird with lots of comedy and the occasional vicious hard-hitting spot thrown in because that’s the nature of most of these guys. I’m a lot happier with it, as a contest, when it settles into a brawl with less comedy involved. Although that’s always an underlying thread. I do buy into the Interracial double superkick, which is a great false finish. T-Bone blindsides Charlie with a lariat and Rampage finishes with the Piledriver. **3/4

This is just bizarre as PCW are running TNA vs. WWE. 2018 is crazy.  Apollo Crews is important to PCW’s history so here’s a quick look at his past in the company:

2013: Came over for their Supershow weekend. Won both his singles contests vs. El Ligero and Danny Hope. Came back for their Christmas show and lost to Doug Williams.

2014: He must have created a good first impression because 2014 he came over for the Supershow and the ROH crossover shows. Contesting matches with the likes of Michael Elgin, Tommaso Ciampa and Low Ki. He also won the PCW title in a three-way match, ousting incumbent champion Chris Masters.

2015: The future Apollo Crews made one last trek to the UK for PCW over the Road to Glory weekend where he lost the title back to Masters and was forced to leave PCW. His NXT debut was three months later.

These lads wrestle like they don’t want to get injured wrestling for PCW. In all honesty I don’t blame them at all. They run a weird spot where Moose really wants to chop Apollo when he’s sitting on a chair and doesn’t tell anyone about it. Including Apollo Crews. Both guys are popular but clearly the crowd want more Apollo Crews and Moose misses out due to that. Apollo takes it with a standing SSP. This was fine, even if neither guy was going all out. **1/2

Most of the first round losers are in a big eight-man tag but when you’ve got Matt Riddle you might as well have another big singles match. Riddle takes it right to the mat while the crowd sing Spandau Ballet and him singing along is great stuff. Riddle is in playful form and keeps offering a leg for Brooks to try and take him down.

After failing a few times he stamps on Riddle’s foot. Brooks is a nicely consistent character. He’s a decent wrestler but he knows his limitations and cheats when he approaches them. Brooks makes a point of working the leg, which is something that WALTER did to great effect in wXw. The focus doesn’t last long and it’s not a major point for the match, instead seeing them segue into big spots. Brooks at one point hitting back to back Canadian Destroyers. It’s clearly a move Riddle enjoys hurling himself into but why would you throw two massive head drops out back to back when it’s not the finish? Even more ridiculousness follows with a ‘TomBROne” on the apron. For a throwaway midcard match it has a ridiculous amount of big spots. Riddle has to throw a bunch of evil shit at Brooks to finish including the killer knee and the Bro to Sleep before the Bromission finishes. This was nuts! Some of the spots were a little over the top but it was fun and mindless violence. Riddle might be the MVP of this weekend. ***1/2

Rhio used to be Rees’ second but she turned face and is now the PCW Women’s champion. Jennie vs. Rhio is not what you’d call good. They’re both tentative and the transitions are horrible. Joey Hayes has brought cheese with him to assault El Sham. The cheese is followed by Bushwhackers and Arcadian bringing space helmet assaults. There are definite timing issues throughout and there’s one where Arcadian is taking the helmet off and he has to put it back on because the attack isn’t forthcoming. There’s a great tope though. In the confusion Rhio gets the pin on Iestyn Rees! **1/4

This is part of a bigger storyline as Banham has a ‘Money in the Bank’ style title match with T-Bone and they’re on opposing sides with more gold at stake. Team Single have been overpowering everyone but they can’t do that with Big T. Both of Team Single try but Big T can just use his size to overpower. Big T has hardly wrestled all tournament so he’s fresh here and we finally get a ‘Big T match’. Big T has a few issues. He’s got no one near his size that he can work with. He shouldn’t really be selling for any of the smaller wrestlers because the size difference is huge. This is rare opportunity for him to battle someone like Rampage, who can effectively bump him and yet Big T can throw him around. Banham finally gets isolated and T-Bone beats him quickly. Not much build for Banham/T-Bone down the line with that. The implication is that Banham can’t beat anyone by himself. **1/2

Lionheart then runs in and lays out T-Bone. So much for the titles celebration. Anyway, Banham sees the fallen T-Bone and goes to cash in but Rampage runs him off.

There’s literally ten minutes left on the show. You’d think they’d want to finish strong but we’re finishing with a sprint. It’s amazing that WWE let Apollo Crews do this show but somehow even more amazing that nobody cared! PCW have almost no buzz. It’s astonishing. Considering this is a sprint Apollo Crews manages to actually insert a bearhug into it. It’s a ten minute match! Jesus. Allmark takes a beating throughout, deliberately positioned as a huge underdog. Then he flukes a roll up for the win. This was hugely underwhelming. **

An incredibly mediocre show. Only a few things stood out here. The crowd were great, especially around Sugar Dunkerton, and there were a couple of decent matches. Sabre-Allmark stole the show but wasn’t as good as Sabre-Riddle from the matinee show. The two tournaments both petered out. Apollo Crews, for all his press, clearly came over here to work at a house show level. His matches were routinely bland. It was an astonishing booking to get Apollo Crews for these shows but it didn’t generate anything beyond a little early buzz. The cards didn’t pay off and the tournaments disappointed. But then it is PCW. Expectations are low. 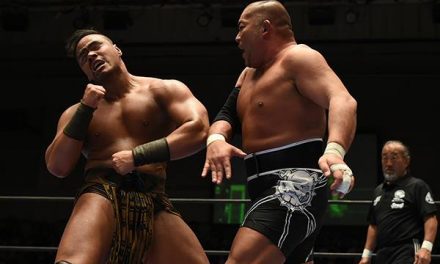 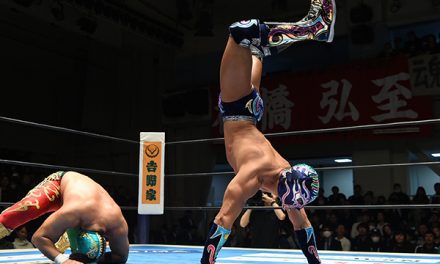