2017 Match of the Year: WWE vs. Voices of Wrestling 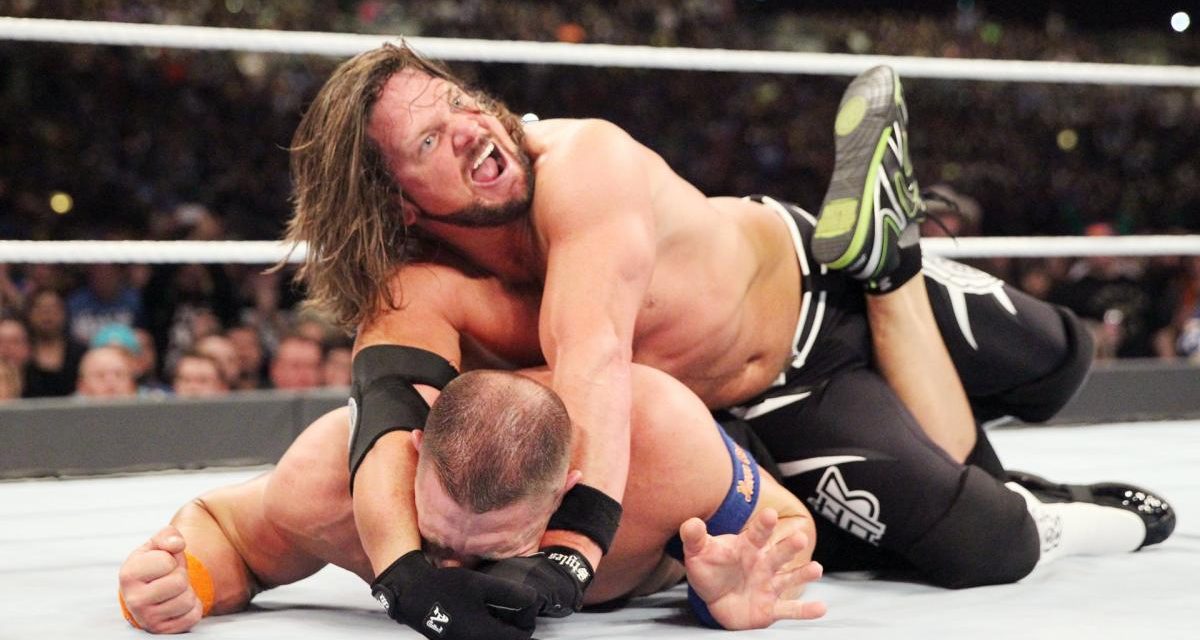 A common discussion topic I saw throughout 2017 was the sub-par year that WWE had. In the wake of Voices of Wrestling’s Match of the Year poll results, I thought it would be an interesting experiment to test VOW’s results against WWE’s own Match of the Year list and see what we can glean regarding the way we (wrestle nerds voting in the VOW poll) view WWE’s output and how that compares and contrasts with the WWE.com writers.

Voices of Wrestling’s Match of the Year list is one of the most comprehensive you’ll find. 109 voters cast ballots which featured 220 matches from 54 promotions.

WWE.com’s 25 Best Matches of the Year list, conversely, is a fascinating look at how the promotion sees its in-ring output. I think the most interesting thing about the WWE list is that—while the writers are clearly in tune with what the VOW voters consider to be a good match—they have to serve two masters. While writers such as myself could make a list based solely on our own tastes, these writers were forced to mesh their own taste with some WWE propaganda.

To see how the two lists match up, I’ve gone through the VOW list and identified the ten highest ranked WWE/NXT matches. I then found those matches on the WWE list to see where the company slotted them.

I’m going to start with the highest ranked match on the VOW list and move down the list in order.

This is an example of where the WWE.com writers are very much in tune with the VOW voters, as this bout garnered the closest absolute rankings of any match on the two lists. An incredible match featuring two guys who could (and should, but with main roster booking, who knows) be future superstars. Actual superstars, not WWE’s replacement term for “wrestlers.”

I thought this would be the highest-finishing WWE match in the VOW poll (I had it 8th on my ballot, personally), but clearly underestimated the love for Bate/Dunne. Seeing this finish first on the WWE list is no shock at all – it was a major match on a big four pay-per-view, John Cena was in it, and it featured Cena simultaneously overcoming his nemesis, AJ Styles, and tying Ric Flair’s championship record. If this had merely been pretty good, it would likely have placed highly on the WWE list. Being a five star match made it a no-brainer.

At first glance, I started thinking that maybe in-ring quality was going to dominate the WWE list, but then I considered the storyline factors in this match. Given the importance of the story elements to this bout, that’s something to keep an eye on as we head down the list.

This is one I didn’t really get the rave reviews for. It was quite good, and was certainly the best traditional Lesnar singles match in ages, and clearly that resonated far more with VOW voters than it did with me. I was a little surprised by how high it ended up on the WWE list, as well, but then I remembered a key point that wasn’t as prominent when looking at it initially – it was an exceedingly rare match between the top RAW and Smackdown champions. It was also, to my knowledge, the first ever Universal vs WWE champion showdown.

The Usos vs The New Day (Hell In A Cell)

For the first time in this exercise, a match didn’t make both lists. Shockingly, the most violent Hell In A Cell match since the blood ban was the ONLY major New Day/Usos match to not be ranked on the WWE list. This was my personal favourite match in that series, and one that was a late cut on my ballot. Given that this match ended WWE’s best tag team feud of 2017 in a rare tag team Hell In A Cell, my “storyline importance” theory takes a massive blow here. We’ll revisit the highest-ranked New Day vs Usos tilt in a bit.

This match is pure WWE, and it’s dot-com ranking makes perfect sense to me.

Brock Lesnar, the special attraction champion, takes on the hardest-pushed guy since John Cena and the most successful hard-pushed guy since John Cena. Also, Samoa Joe is there. The star power in this one is substantial, AND it’s an awesome demolition derby of a contest. This one had almost no importance story-wise, really, but it just FEELS like the kind of big-time, chaotic match that is a signature element of the WWE style.

Authors of Pain vs DIY vs Revival (NXT TakeOver: Orlando)

I have very little memory of this match, other than “based on those names, I MUST have liked that.” Some additional refreshing confirms that yes, I did really like this, but the match that comes next on the list knocked everything else from WrestleMania weekend out of my brain. The only really notable element of this match’s inclusion on the WWE list is that the blurb reads like an Authors of Pain puff piece.

This match finished second on my ballot, despite it’s criminally low overall placement.

I very nearly ranked it first, but my Okada/Shibata blurb was way better, and that broke the tie. Even more jarring than the VOW rank was the WWE rank. It didn’t even make the top half!? HERESY. At this point, my importance theory is full of holes and taking on water.

Seeing Captain Kraetsch’s baffled reactions to this match continuously climbing the rankings over the course of the voting was endlessly entertaining. The emotional arc of this match was incredible, and I think how people react to it is largely defined by how well that arc connected with you. I LOVED this match, and it was another late cut to my ballot. In hindsight, I actually kind of wish I had cut my number 9 to make room for it.

Aside from featuring a guy who should be a huge star and one of the most intriguing prospects in NXT, this one didn’t have a ton of lasting importance for either guy in terms of story. It DID put Dream on the map, though, and make him a major player in NXT, so there’s definitely some significance to it.

One of the downsides to the VOW list is that names and dates often lack some context, especially in the case of WWE matches, which are often most easily distinguished by gimmicks. I had to look up which TakeOver this was to remind myself that this was the ladder match that featured the Ciampa turn. It was, as the VOW ranking, suggests, fantastic.

Tommaso Ciampa’s heel turn is, arguably, the most important angle to take place in NXT since Owens and Zayn went to the main roster. I was about to patch some of the holes in my “WWE is giving a lot of weight to a match’s importance in their list” theory, then I realized it didn’t make their list. HOW!? I hope that theory enjoys it’s new home at the bottom of the ocean.

The Usos vs The New Day (SummerSlam)

Of the matches ranked on both polls, this one has the highest disparity between its rankings. Seeing this rank fourth on the WWE list made my brain melt out of my ears, not because I don’t think it was an easy inclusion on such a list, but because a pre-show match made the top five and the Hell In A Cell match didn’t make the list at all. Then it clicked in my brain that being a kickoff show match was probably WHY this match ranked so high. If you’re WWE, why WOULDN’T you want to highlight the best kickoff show match of all time? If you’re gonna have 16 hour pre-shows, you might as well do your best to convince people it might have awesome stuff on it.

This is actually the match that sparked the idea for this article – it was an excellent match, but there was a clear motive, in my estimation, to including on the list as high as it is.

Briefly, there are some notable things from the lists that didn’t fit the format of my article, but I’d like to mention.

WWE chose 25 matches for their MOTY article, which I thought was a bit much, but only 28 WWE matches ended up on the VOW poll, so the numbers ended up being pretty close. VOW’s split of main roster and NXT matches is even – 14 matches each made the list. WWE favours the main roster, but not by much – 18 of 25, with one 205 Live match making an appearance and the remainder being from NXT.

14 matches appear on both lists. The unique matches on the VOW list are almost all NXT matches, with the exception of the Big Show vs Braun Strowman cagematch and ring-breaking match (the WWE list included the 2/20 RAW match as the representative for that feud), and JOHN CENA vs ROMAN REIGNS. Clearly the WWE, or at least it’s website’s writers, care more about match quality than we may have suspected.

Ultimately, I don’t know if I actually learned anything substantial about how WWE views it’s own in-ring output (I’m very good at wrestle-science, clearly). The dot-com writers seem to be valuing similar elements to the rest of us nerds, they just get a paycheck for writing the blurbs. 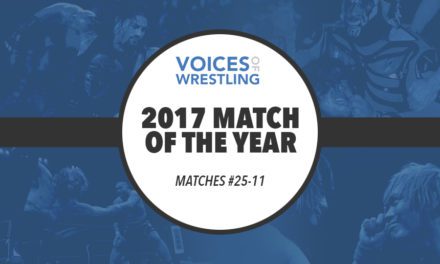 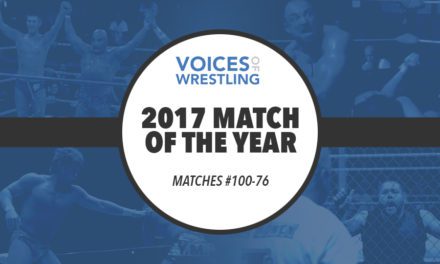 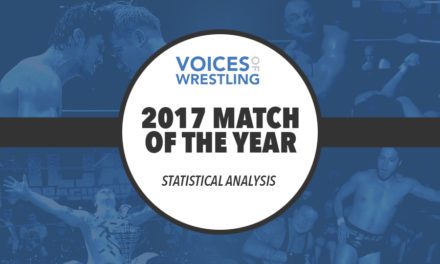 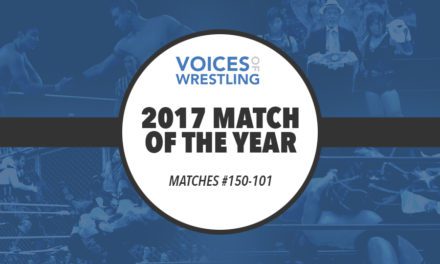