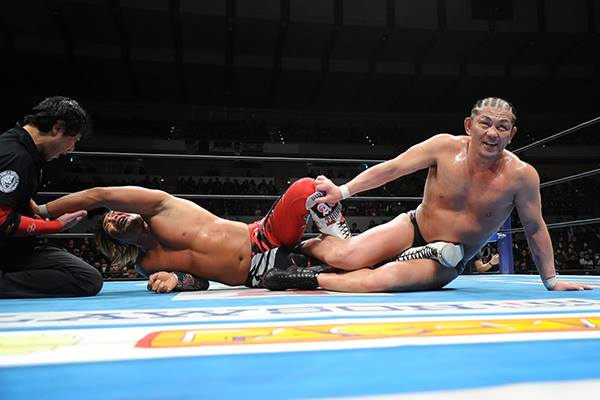 As its title implies, this tour is a fresh start for New Japan Pro Wrestling. Although Wrestle Kingdom takes place at the beginning of the calendar year, I like to think of the Tokyo Dome event as the finale for the previous year. Unlike most tours, THE NEW BEGINNING starts with two big shows.


After his Young Lion Cup victory, Kitamura set his sights on an overseas excursion to America. I expect that this trial series will be his farewell tour while he waits for his visa to be cleared. This was a short match filled with the expected chops, elbows, and lariats. Kitamura has a great presence, but still moves a bit awkwardly at times. Elgin won with his ‘buckle bomb/Elgin bomb combo at 8:04. **1/2

On Wednesday, New Japan announced that Satoshi Kojima would miss this tour with a torn left Anterior Cruciate Ligament. An ACL tear is a serious injury for any athlete, but it is particularly concerning for a pro-wrestler approaching 50 years old. Personally, I am a huge fan of Koji’s work; he has continued to deliver at a high level well into his 40s. I hope he has a speedy recovery, but I expect him to miss this year’s G1 and return in about a year.

Rather than give Koji’s spot to an up-and-coming heavyweight like Tomoyuki Oka, New Japan replaced Kojima on the tour with his generational peer Manabu Nakanishi. This has some good action and did a good job of raising the crowd’s energy. Even though the hontai side had one more heavyweight, KUSHIDA got TAKA to tap to the hoverboard lock at 8:06. As a side note, commentary mentioned that Taichi might be moving up to the heavyweight division. **1/4

After five consecutive years of New Beginning title matches, Ishii settles into an undercard role for 2018’s tour. Everyone was solid here, but it was a pretty pedestrian, at times, sloppy match. Ishii spiked Chase with a vertical-drop brainbuster for the win at 7:06. **1/4


Henare finds himself opposite his Kiwi senpai, Fale, in his first title challenge. Henare played a great fiery underdog in this, ultimately being overwhelmed by his seniors. Tama got him to tap with a ground submission called the Dreamcatcher at 9:15. **3/4


I’m very ready for a full-fledged transition into the tag division for Juice/Finlay, but here they find themselves supporting Ibushi in his struggle with the Elite B-Team. Kota Ibushi reminded everyone that he can do some pretty amazing things:

This was entertaining; a very good match. Page got the win on Finlay with the Rite of Passage at 10:47. ***


This is the first of two CHAOS/LosIngo tag matches on the show. Naito pinned Ospreay with a jackknife after a low blow at 11:19. I came out of this match feeling like Ospreay has a better shot of beating Naito than YOSH-HASHI does. They did a post-match brawl to try to get YOSHI-HASHI back on track for his upcoming singles match with Naito. ***1/4

New Japan is finally giving some attention to the heavyweight tag division on this tour. As much as I enjoy his work, it was refreshing to see a LIJ/CHAOS multi-man tag without Naito. After seeing their chemistry tonight, I’m really looking forward to Okada and Goto challenging for the tag titles at Korakuen. Okada made BUSHI tap with a cobra clutch at 11:52. ***1/4

Okada tried to get SANADA to talk after the match, but ended up attacking him after SANADA refused. I liked the added aggression that Okada showed here.

This is the lead-in for tomorrow’s top two matches. This match is also Jay’s first match as a CHAOS member and his reunion with former dojo-mates SHO (Tanaka) and YOH(ei Komatsu). This was a really fun match with everyone flying all over the ring and some interesting dynamics between Jay and Roppongi 3K. Kenny pinned YOH after a triple-team Indytaker at 10:53. Jay hit the Bladerunner on Kenny after the bell. ***1/4

This is the 6th singles meeting between Tanahashi and Minoru. Their most recent was the King of Pro Wrestling main event in 2012; one of the best matches of the last decade. They also had two other matches earlier in 2012: the Wrestle Kingdom VI main and a G1 league match in cavernous Yokohama BunTai. Tanahashi won two of three that year. They also traded wins in 2003 and 2004, early on in both Tanahashi’s career and Minoru’s full-time transition to pro-wrestling. So, while there wasn’t much build to this match other than on New Year Dash, there is plenty of history to dig into.

Tanahashi tried to match strikes with Minoru, but he was reminded that Suzuki throws some of the hardest elbows in Japan. Tana shifted his attention to targeting Minoru’s leg. Tanahashi was going for a sling blade, but Minoru drilled him with a running dropkick, showing that his leg was still unaffected.

Tanahashi once again shifted his attention, this time to Suzuki’s neck; hitting three Twist and Shouts and a sling blade. Tanahashi thought he had Minoru worn down enough to go for a High Fly Flow, but Minoru was ready, getting his knees up and locking in a great kneebar/heel hold. In a callback to their previous matches, Minoru turned the tables on Tanahashi and destroyed his leg for the rest of the match. Tanahashi refused to give up, but Red Shoes stopped the match at 32:28. I love how this was built and how it played into their previous matches. To date, my match of the year. ****1/2

This show flew by. Nothing on the undercard is worth going out of your way to watch, but it is all entertaining. The main event, however, is absolutely worth your time. If you haven’t seen it recently, haven’t seen it at all, or just don’t remember it that well, go back and watch the KOPW 2012 main event before you watch this. 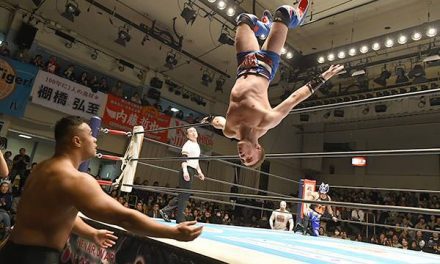