With tomorrow’s big Holly Holm/Cyborg UFC title fight and last week’s Women’s Royal Rumble announcement, there’s one name that seems to be springing back to the forefront of my combat sports mind brain: Ronda Rousey. Specifically, what is 2018 going to have in store for her? Will all of the Rouseylings get their fix sooner than later? If she does show up in the WWE Universe®, as expected, what will that look like?

The Story So Far

Twenty-five and a half months ago, Ronda Rousey was the queen of the combat sports world. She was making appearances all over TV and movies, UFC commentator and cannabinoid enthusiast Joe Rogan was calling her a “once in human history” athlete, Beyoncé was using clips of Rousey’s rants as motivational crowd juice for her live show; Rousey could seemingly do no wrong. That she couldn’t act warm if you set her on fire didn’t even matter, she was a bonafide Star and everybody wanted a piece. The old Sable gimmick of the men wanting to see her and the women wanting to be her felt legitimately real. Everything she touched turned to gold and lead to her hagiography growing. That was, of course, until she ran (almost literally) into Holly Holm.

After Ronda’s devastating knockout loss at UFC 193, a different side of her personality came out. Suddenly, the story of winning a bronze medal at the Olympics ahead of schedule for most athletes then refusing to return to the sport again made sense. Whereas Conor McGregor faced the music graciously after a high profile loss and in turn became an even bigger star, Rousey turned into a recluse and refused to be seen. She hid from the public almost entirely, save for a few carefully chosen opportunities where it was made abundantly clear beforehand that the loss was not to be addressed and her image was still to be projected as the baddest woman on the planet.

She returned to the cage thirteen months after that defeat, exactly one year ago tomorrow, for an opportunity to regain the title she and everyone else viewed as her rightful property. That title was now held by Amanda Nunes, a soft spoken Brazilian who did her best speaking with her fists and as a result had become something of a darling to the most hardcore segment of the fan base.

Leading into the fight, Ronda refused to do any interviews with the indigenous MMA media. She carefully selected appearances and interviews with friends Ellen Degeneres and Ramona Shelbourne and shut out all talk of her loss a year prior or her period of solitude that followed. Come fight night Nunes absolutely massacred Rousey in seconds, making the fight look uncompetitive to the point a rematch would be unsanctionable by any commission with a shred of humanity.

Again, following the loss, Rousey went into hiding. Again, there would be no answering for her deficiencies in the cage. Again, her following public appearances would still try to maintain the illusion that she was the “baddest woman on the planet.” It’s this cycle of struggle followed by emotional turmoil and refusal to accept reality that have me questioning the direction WWE seems to be headed for Ronda’s arrival.

Earlier this year, word leaked that Rousey had begun training for a run in the WWE. At first it seemed like it could very well be a legit run with the company, but it soon became apparent that instead we were most likely looking at a build to one or two big events. A Four Horsewomen-Off with the MMA and NXT varieties or perhaps a showdown with Charlotte Flair one-on-one on a grand stage.

Now that the Women’s Royal Rumble is upon us, a new contender has emerged for everyone’s pet theory regarding Ronda’s involvement. Many of us watched Stephanie McMahon make that announcement and thought, “Rousey’s winning this thing.”

It makes a certain amount of sense. You have a big star that can make this moment feel gigantic, why not use her? Sure, “Wrestling Twitter” is going to complain that the first win will go to someone who’s a part-timer and doesn’t “deserve” it, but they’re not canceling their Network subscriptions and will be triggered by something else a week later, so who cares? You’ve got Ronda, you use Ronda.

There’s just one thing they seem to be forgetting, however.

The Façade has Worn Away

Every time we see Ronda in public, still to this day, we’re told she’s this vicious killer. She’s Seth Rogen’s bodyguard and she’s demonstrating the new Xbox’s “power” with her punches. (By the way, if I’m Sony, how quickly am I calling Amanda Nunes or the Cyborg/Holm winner to do an ad for the PS4 Pro? I mean, yesterday, right? That one’s free, ad wizards.)

When Ronda appears on WWE TV, as she has a few times in the past year or so, she’s still this revered figure. “Ooh, look Maggle, it’s RONDA ROUSEY, the toughest woman alive!”

But, guys, we all know that’s not true anymore.

Ronda Rousey isn’t the toughest woman on the planet any more. She’s not the toughest woman in her weight class or probably even the 5th toughest female bantamweight in the world. She’s ranked 9th contender in the UFC’s official rankings at the moment, which, accounting for the champion, means she’s barely in the top 10 at all.

This isn’t an insurmountable obstacle for her and WWE, of course. People (who aren’t Yuji Nagata) have rebounded from much worse. She can be rehabbed. The problem, though, is that acceptance has to come before the rehab and Ronda isn’t accepting her new reality. No one around her, WWE included, seems interested in helping her get there.

That’s the thing that kills me about this situation. There is a genuinely fascinating human interest story here. Ronda rebuilding herself is something we’re all interested in. Deep down, I’m rooting for her. I want to see her get back on her feet and move forward a changed person by these challenges.

Isn’t that why we watch this stuff to begin with? The human drama of it all is the thing that hooks us to begin with. People chanted “You deserve it” first for Daniel Bryan because they followed his story and realized what that moment meant not just to Daniel Bryan, but Bryan Danielson. I sat in National Guard armories and bingo halls and watched that man ply his trade thinking, “This is the best wrestler I’ve ever seen in my life. When is he going to get a fair shot at the big show?” At the close of WrestleMania XXX, as he held those titles aloft, triumphant over three men who were practically the physical embodiment of all the forces that worked against him over the course of his career, how could you not have goosebumps? Who didn’t tear up when he retired on Raw. I still think about that promo now and struggle to fight back tears. It was such a powerful moment and was the very reason I follow WWE, UFC, or anything else. I cared deeply about that man’s story and it spoke to me on a personal level.

Ronda has a story like that and all the girls who look up to her need her to tell it. They need to see someone face down the worst moments of her life in the most public venue possible and come back stronger. That’s a far better motivational moment than the “DNB” promo ever could have been.

Instead of realizing this unique opportunity that she now has and using it for its maximum potential to inspire people, succeed creatively, and, of course, make money, I’m afraid it will be squandered. I’m afraid that instead of capitalizing on reality, Rousey and WWE will insist on only promoting strength and failing to miss the bigger picture. No one is all strength, we all know that. And we especially know it when we’ve all seen you nearly lose your head clean off your body twice.

What I want to see them do here is embrace reality. Don’t pretend that Ronda is someone we know she isn’t anymore. Make it part of the build to whatever match she does. Let Charlotte namecheck Holly and Amanda. Let her threaten to send Ronda running from her just like she ran from Cyborg. Let us see the real person and see her rebuild herself into the hero we’ve always wanted her to be.

Give us the humanity. And I guarantee you’ll be rewarded with our dollars. 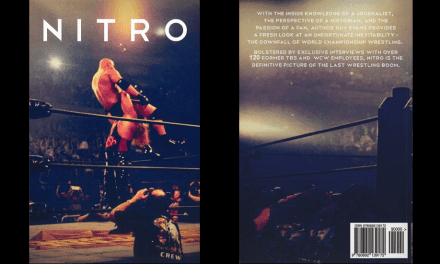