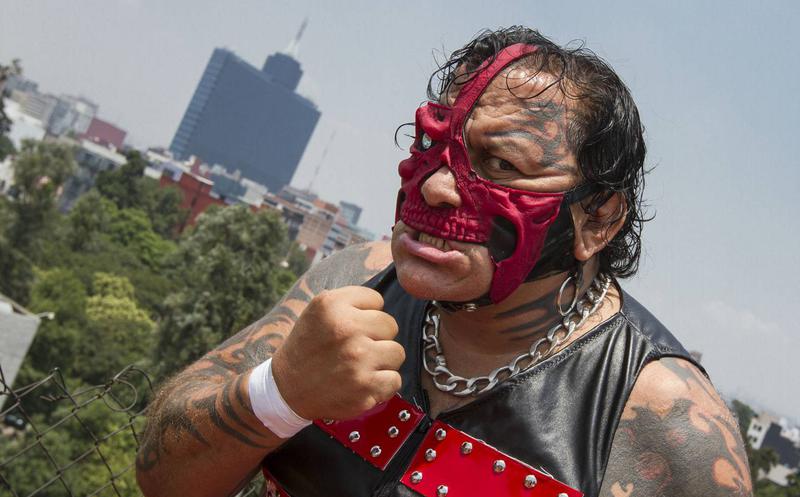 A wrestler trains his entire life to exert the tiniest amount of control over a task that is inherently chaotic. The control over the emotions of spectators and over the physicality of their peers. At their peak, the best wrestlers seemingly have powers that border on supernatural, bending entire rooms to their will, moving their bodies in ways that are only tangentially human. Perhaps for some there is a thrill in those rare moments when they must cede control, when they leave their feet, when they are on their backs, staring up at someone else growing larger and getting closer, seconds away from collision.

There is a moment, before everything goes wrong, when practiced banality gives way to fearful realization. Late in December in 1981, Pedro Ortiz Villanueva leapt from the top rope to the floor, a move he had practiced an untold number of times. At some point, he must have realized there was no one there to brace him. There must have been some resignation, some attempt to lessen the impact. It was for naught. His face hit the cement, hard, His right eye was irreparably damaged. After emergency surgery it was removed, and he would have to wear an eye patch for the rest of his life.

Not to be deterred, Villanueva abandoned his real name and took the one that he would end up synonymous with: Pirata Morgan.

Working with the eye patch that was now an everyday necessity, Morgan took the bitterness of his circumstance and took it out on his opponents. He let it fester. He let it fuel him. Certain that he was being passed over by lesser talent for things beyond his control, Morgan struggled and clawed. He bit people’s faces hard enough to draw blood and punched them with closed fists and threw himself at people with reckless abandon. He became a hated and evil man and he embraced it and shrouded himself in it. By the late 1980s, Morgan found himself once again near the top of his profession.

By contrast, Jose Luis Barajas Fernandez, known throughout his career as Faraon, had lived the sort of charmed life that must have chaffed Morgan. After unmasking in the mid 1970s, a move that can often kill the mystique and momentum of even the most talented performer, Faraon grew in popularity thanks to his previously hidden good looks. Given the nickname El Rudo de los Ojos Esmerelda (The villain with the emerald eyes), he traveled and main evented all over the country, most notably in a long standing feud with Sangre Chicana. In 1990, past his physical prime, he found himself facing Morgan, a man much younger than he, but with the bitter heart of a displaced peer.

A fading star held aloft by his luck and charm. A man in his prime, held back and pushed forward in equal measure by his own inherent dissatisfaction. On November 16, 1990, they fought for one another’s hair.

Before the first fall can even begin in earnest, before Faraon can take off his teal windbreaker, Morgan is upon him, grabbing at him, slamming him face first in to a ring post. Faraon stumbles and falls, desperate to find his balance and having more trouble doing so than he perhaps used to. Behind him, Pirata struts shirtless, his hands raised and his lips snarled. Trash bounces ineffectually off his chest and he doesn’t react. As he climbs in the ring, Faraon is already bleeding, already breathing from his mouth. Morgan grabs him by the hair and bites and stomps and shouts and as he stands indignant before the ref, the only sign of effort is the lights catching the thin sheen of sweat on his back. He speaks constantly, another man’s blood running down his chin, the referee’s hands constantly on his back, pleading with him to show some adherence, some restraint.

Something within Pirata Morgan listens. As he breaks, Faraon responds, swinging wildly, striking true, a blazing fire still present in his emerald eyes. He knocks Pirata back again and again, fighting desperately and valiantly and still merely trading shots with the younger man. Soon, he is again prone in the center of the ring, his face and head being beaten while a man in a white shirt shouts to exert some control of his own. But again he fights: a DDT! Faraon remains a warrior. Morgan regains his dominance and fights back again and again, each time yelling and spitting at the referee, at the crowd, at himself. Blood falls from his chin and flecks the white shirt of the man paid to maintain order. He bites harder and takes more each time Faraon goes down. He spits it up like a mist and watches it rain down and disappear into nothing. To win the first fall, he leaves his feet for the first time, a splash from the top rope, his body momentarily blocking the lights.

In the second fall, Pirata tries to win while Faraon tries to fight. His hair is mat with sweat and blood and leaves marks on the floor and in the ring but when he is standing, his fists are still true. He can still trust them. His body can still move with the urgency it once did, just not as often. There is a moment, a brief one, when Faraon has the upper hand and he finds himself perched on the ropes, getting there with a speed and grace that belies his age. Conversely, Pirata seems to forget who he is for a moment, and stops inflicting punishment. Instead, he goes for submission holds and pinning combinations and tries as hard as he can to win. For the first time, his veneer is perhaps slightly cracked. For all his efforts to come across as an uncaring and violent madman, he still wants to win, more than anything, more than life itself. He hurts people because he can and he hurts people because he is good at hurting people, but most importantly, he hurts people because hurting people makes him win and he loves to win. He needs to win. It’s all that matters.

And it costs him! Of course it costs him. For a moment, everything is even and Faraon and Pirata find themselves both standing, facing each other, mere feet apart. Morgan punches and goes for a submission and his balance fails. In response, finding himself with a chance, Faraon strikes back with the same shocking quickness he showed so fleetingly earlier, once again moving with a speed that is shocking. He pulls Morgan back into la mecedora. The match is even. Faraon spins to his feet in celebration and falls to his knees in pain.

The camera finds Morgan on the outside, lying on his stomach and clutching his back. Faraon surrounds him, pacing and taunting and kicking. Soon, he picks Morgan up, and slams him face first in the ring post. For Faraon, this is the first true victory, recompense for the tactics that made him bleed mere minutes ago. Punches find their mark, and what little energy Morgan seems to have is spent wriggling and struggling out of submission holds, finding just enough within himself to continue forward. In some ways, it’s commendable, the same drive that made him come back to fight and sit atop the mountain with only one eye keeps him fighting here. In some ways, it’s pathetic, as he crawls and flounders and clutches at ropes, a man who is outclassed and defeated everywhere but in his heart, protected always by his ire.

With some reserve of energy that seems impossible, Morgan runs. He runs full force with no plan, just youth and hate in his heart. Faraon, like an aging but skilled bullfighter, steps aside and hip tosses Morgan to the floor. On reflex, he runs as well, although his purpose is clear and his aim is true. He leaves his feet and flies through the middle ropes and Morgan is there, of course he is there, and both men careen in to the front row, empty metal chairs bolted to the floor bracing their collision. In the moment before impact, perhaps Faraon felt that same tinge of fear and doubt that Morgan must have all those years prior before realizing he was safe and true, before feeling the familiar thud of his head and arms hitting another man’s neck and shoulder at untold speed.

As Morgan crawls away, back to the relative safety of the ring, Faraon is once again upon him, and once again they find themselves at a ring post. Grasping Morgan’s hair, Faraon slams his face into the steel over and over, to the point where even watching it feels like some sort of violence.

It is truly hard to describe how bloody Pirata Morgan is without sounding hyperbolic. And perhaps in some way, describing the amount of blood obscures a more horrifying point: the blood is coming not only from his forehead, but from the empty space where Morgan’s right eye used to be. It pours forth and when he gets a spare moment to breathe and adjust his eye patch, the slightest movement makes even more of it seep and ooze and fall. And still he runs! He moves forward and attacks at all times. He uses backdrops and body slams and hip tosses, the things that his training beat in to him when he was a teen, preparing him for this exact moment, the moment when his faculties would fail him and he would need to fight on instinct alone. On the outside, his chest heaves and a doctor wipes his face gently before allowing him to continue. He manages a splash, the move that won him the first fall. He misses, and as his body bounces off the mat and he recoils in pain, he looks almost betrayed, knowing on some level that something within him is failing when it did not earlier.

On the outside, as a doctor tries weakly to grab and care for Morgan and the referee worries at the time keeper and Faraon screams for Morgan to keep fighting, Pirata Morgan keeps moving forward. In the ring, almost assuredly unable to see, almost assuredly unable to think, he is beaten and attacked and pinned and each time he recovers and kicks out. Laying on the bottom rope, trying to find something in himself aside from effort, he is held back by the doctor, who simply shakes his head no. When he tries to move, the doctor holds Morgan’s hair with both hands, preventing him further harm by clutching the very thing he just lost.

As the referee raised Faraon’s hand, declaring the winner, Pirata Morgan stood fast and held his hands up, a final plea that he could continue to fight. Perhaps he could have. Despite everything, he was never pinned, never submitted. For Morgan, this would simply be the latest in a long line of moments defined and interrupted by chaos, moments in which people and things outside of his control conspired to prevent him from reaching the places and things he knew he was truly deserving of. For Morgan, the stoppage must have felt like that fateful dive almost a decade before, the sobering realization that there was nothing he could do, no matter how much he begged or fought or screamed. For Morgan, he would have to use it like he did all the other times, a scar to wear proudly on his face, as kindling for the bitter fire that would burn forever in his heart, forcing him to keep moving forward. 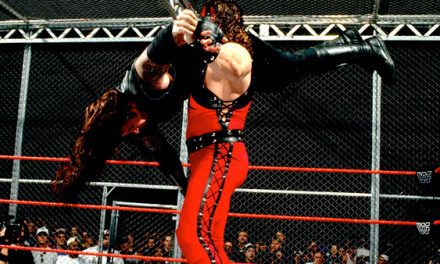