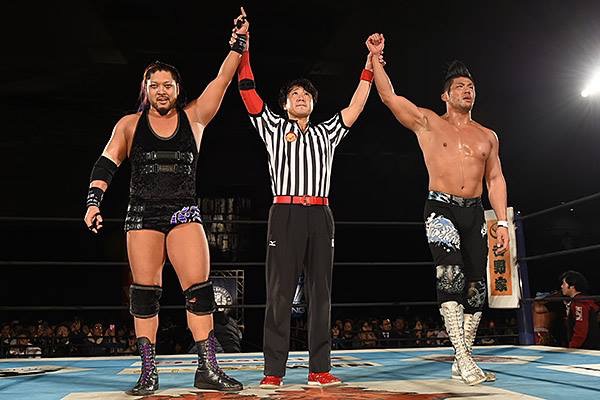 It’s good to see that Tanga Loa was wearing regular trunks instead of that ridiculous bodysuit he worn on most of this tour. Anyway, this was a decent opening contest. While the team of Finlay, Kitamura, & Oka got opportunities to shine throughout, the sons of Haku were in control for the majority of this one. It was a little odd that this match didn’t involve teams that would be fighting on the last night of the B Block (as that’s been the pattern when New Japan does for undercards on tournament shows), but Tanahashi being pulled from the rest of the tour did force some changes, and perhaps this match was one of them. The Bullet Club got the win after Tanga Loa hit a horrible Samoan Driver on Oka. It wasn’t horrible in the sense that it was botched. The issue was that it looked like shit. Tanga Loa picked up Oka for the move and then just….sat down. It looked incredibly weak. **1/4

On paper, this had the potential to a pretty entertaining eight-man tag, considering who was involved, and when the dust settled, it ended up being just that. This match was by no means extraordinary, but there was fun action from start to finish, and there weren’t any dull moments to speak of. Despite coming out with the win, there were some signs of dissension on the team of Cobb, Elgin, & War Machine. At one point, Elgin tagged himself in (much to the annoyance of his teammates), while later on, there was an actual moment of miscommunication in the ring, when Rowe accidentally took out either Cobb or Elgin (can’t remember which). Those moments did serve as a bit of buildup for their tournament match the following night. Cobb would score the victory after hitting Chucky T with Tour Of The Islands. Again, for an eight-man tag that went about eight minutes, it was enjoyable. ***1/4

War Machine confronted Cobb & Elgin after the match, and as they went back up the ramp, Rowe yelled “Fuck Michael Elgin” into the camera.

Honestly, I really don’t have a ton to say about this one. It was a perfectly fine six-man tag that went exactly how you’d imagine it going. The heel side (Suzuki-gun in this case) dominated Liger in the first few minutes, Makabe hit some of his signature spots after Liger tagged him in, and then Henare got a bit of offense in before eventually getting beaten up by KES. The only noteworthy item here was the finish, as instead of using the Killer Bomb to finish off Henare, Davey Boy Smith Jr. pinned the young lion on his own after hitting a Bulldog Bomb. Nothing much else to say beyond that. **3/4

I noticed that LIJ has doing this scene during their entrance where Naito tries to slide his Tokyo Dome Briefcase across the ring in an attempt to hit Hiromu. Not entire sure what the deal is with that. Anyway, as I’ve been checking out cagematch throughout the World Tag League (mainly to check on match times for the tournament matches), I saw that they’ve repeated this exact six-man tag for the majority of this tour. It’s not the most creative booking, but considering the guys involved, you know it’s going to deliver every single time, and it certainly didn’t disappoint on this occasion. This was an entertaining six-man tag that continued the build towards Wrestle Kingdom 12. Ospreay had some fun exchanges with Hiromu, Naito had some interactions with Okada, and we even saw LIJ work over Gedo’s beard (as weird as that sounds). After Okada counter a Destino attempt from Naito with his new submission hold, Ospreay got the win for CHAOS after pinning Hiromu clean with the OsCutter. That was certainly a slight surprise, since you’d think either Gedo or BUSHI would be taking the fall in this situation. Either way, CHAOS certainly got the better of LIJ on this night. ***1/4

After the match, Okada locked BUSHI in his new submission hold, and then the CHAOS trio mocked Naito by doing his eye taunt.

After being on the losing side of things for most of this tour, Nagata & Nakanishi ended the World Tag League on a high note after picking up an upset win over The Bullet Club. This was a pretty basic tag team affair. Nagata actually got the upper hand of Fale in the opening minute or so before The Bullet Club took control during a brawl on the floor. From there, the New Japan Dads had to fight an uphill battle, but they eventually got the win when Nakanishi made Owens tap out to the Torture Rack while Nagata had Fale locked in an armbar. When was the last time Nakanishi actually won a match of any kind?! I feel like it’s been a very long time. Even though the result really doesn’t matter, in terms of deciding the winner of the block, this win got Nagata & Nakanishi up to 4 Points in the final standings. **1/4

For the second A Block show in a row, Suzuki-gun lost a match by disqualification when Iizuka used the iron fingers. Fortunately, we actually got a proper match before the DQ was called, unlike that horrid mess from Night 15. For the most part, this bout was actually pretty decent. We did get the usual brawling in the crowd (a requisite for all Suzuki-gun matches seemingly), but the interactions between Kojima & Suzuki (particularly their chop exchanges) definitely lifted this one up. Aside from that, this was relatively standard. Nothing much else to add. TenKoji gets to 6 Points, though not in the way they were probably expecting. Also, can Iizuki just….go away? Please? **1/2

Page & Yujiro actually had a shot to win the A Block coming into this match, though they also needed Hirooki Goto & YOSHI-HASHI to defeat LIJ in the main event (if there was a tie, Page & Yujiro would hold the tiebreaker over the CHAOS duo). However, that possibly went out the window when Death Juice managed to pick up the victory here over The Bullet Club. This was a really good tag team bout. Things got off to a hot start, as everyone (including Yujiro!) hit big dives to the floor. From there, the match featured a lot of entertaining moments and, similar to some of the multi-man tags on the undercard, there really wasn’t a major lull in the action. This was easily one of the best matches of the tournament for this Page/Yujiro team, and it’s not much of a surprise that it came against Death Juice, who’ve definitely been one of the bright spots in the A Block. Again, this was a very good match with a result that set the stage for a “win and move on” scenario in the main event. ***1/2

With Adam Page & Yujiro Takahashi falling to Death Juice, that meant whoever won this bout would officially win the A Block. This had the potential to be one of the strongest matches of the entire A Block, and in the end, it certainly delivered. This was a great main event! Not only was this unquestionably the best match in the A Block, but it was also one of the best bout of the entire tournament. Things got off to a pretty standard start, but as the match progressed, it continued to build momentum slowly but surely. The second half was excellent, and there were some awesome nearfalls in the final few minutes. Both teams went back and forth, and the Japanese commentary team was going crazy by the end. At one point, Goto & Yoshi-Hashi hit EVIL with their double-team GTR (which they’ve won most of their matches with), and EVIL became the first person in the tournament to kick out of it. The crowd exploded at that nearfall, and in general, they got louder as the bout progressed. Eventually, LIJ managed to hit their tag team finisher (essentially The Magic Killer, which Anderson & Gallows used) to win this main event, and the A Block. Once again, this was an incredible match, particularly down the stretch. I’m not sure if EVIL & SANADA will win the tournament, but hopefully they’ll be involving in the heavyweight tag team division more often next year. ****1/4

This was on its way to being another run-of-the-mill World Tag League event until the last two matches. Bullet Club vs. Death Juice was very solid, but the main event was easily the match of night. If you have time, you should definitely check it out, because it was pretty awesome. As for the rest of the show, the other two tournament bouts are skippable, but there are a couple of multi-person tags on undercard that were pretty entertaining.

Here are the final standings in the A Block: