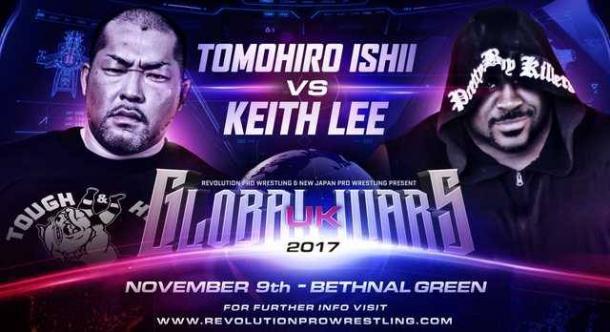 Rev Pro returns to York Hall with the stars of New Japan for the first night of the Global Wars event. The main event for this one is a preview of the second show’s main event, as British Heavyweight Champion Zack Sabre Jr. and challenger Will Ospreay face off in a big tag team match. We’ve also got Keith Lee and Tomohiro Ishii going one-on-one in a massive singles match, as well as IWGP Jr. Heavyweight Champion Marty Scurll going up against G1 Climax winner Tetsuya Naito.

This was my first experience with Rev Pro, and the presentation is very good. The commentary on the other hand, was pretty bad. The match was your standard two guys in, one guy out three way match. BUSHI left his working boots in the back, as he did very little here. BUSHI misted Bodom before Smile took both guys out and pinned Bodom with a frog splash. This was a nice entree to get the show started. **3/4

Oh dear. If you like Yano, you will like this match. If you don’t like Yano, this one is a big ol’ skip. Yano gave the Lords a DVD full of powder and smacked it in their faces. Grey responded by giving Yano a balloon full of powder and popping it in his face. Grey and Dunne got double low-blowed, and Yano rolled up Grey for the win. *1/2

Riddle is going one-on-one with Minoru Suzuki on Night 2, so he’s facing Suzuki-gun underling El Desperado. I’m pretty sure one of the announcers called every match on the card so far “one he was looking out for.” I will give the commentators credit for saying that Desperado going after Riddle’s leg is bad for Riddle, as he will have to wrestle Minoru Suzuki the next night no matter the decision here. Very good night-to-night setup there.

These two were so smooth in this match. I’m seeing why people say that Despy is underrated; his transitions are super slick. There was one point where Riddle went for a Pele kick, but Despy ducked it and slipped on a Stretch Muffler that made me take notice. Riddle knocked Despy out with a big knee, then tapped out Despy with the Bro-mission. An odd match on paper, but a very good match in execution. ***1/4

Naito has a sweet LIJ baseball jersey. I know people have issue with these men at times, but they came together and had a really good match here. It’s a singles match that you’ll never see in New Japan, as both men are in heel units and are in different weight classes. There was a little goofing off at the start, but a majority of this match was Scurll continually going after Naito’s arm.

Scurll got a lot in on Naito here, hitting him with the Bird of Prey and a tilt-a-whirl GTS deal for nearfalls. But Naito always was one step ahead of Scurll when it came to Scurll’s bread-and-butter stuff like the Chicken Wing and the finger snap. BUSHI came in to run interference, but Naito accidentally knocked him down. The ref got bumped and Scurll went for a low blow, but Naito hit a low blow of his own before winning with the Destino. Even though Scurll is the Jr. Heavyweight Champ, I’m surprised at how much of this match he controlled. I thought Naito winning was a foregone conclusion, but they got me during this one. Really good stuff here. ***1/2

Gibson cut his promo before the match, saying that the “smart mark” fans “think Wrestle Kingdom is a Super Mario spinoff.” He tells Nagata that this match isn’t an honor or a privilege, it’s just another match for him. I don’t know if there was an intermission between this match and Scurll/Naito, but both matches told the same story of one guy (in this case both guys) going after the other guys arm. It was fine, but it wasn’t anything special. Gibson hooked the Shankly Gates on, but Nagata shifted around and hit the backdrop driver for the win. **1/2

The crowd was dead silent for most of YOSHI-HASHI’s two minute entrance. This was another decent, but uncompelling match. There is just something about YOSHI-HASHI that keeps most matches from being anything special. Romero and YOSHI took out Brookes and worked on Banks, but Banks fired up and took both Chaos members on by himself. CCK hit a sick effing tag move on Romero for two before YOSHI broke up the pin. Banks hit a Slice of Heaven and a Kiwi Krusher to get CCK the win. Nothing more than an enhancement match for the former Rev Pro tag champs, but it did the job well. **1/2

This match may be proof that there is a wrestling god, and they love us. From the jump, these two wasted no time and just started beating the hell out of each other. Lee had the advantage to start, using his size, agility, and power to toss Ishii around and control the match. Every time Ishii tried to fight back, Lee would quickly knock him down again. But the key is that Ishii never stayed down for long. It was an uphill battle, but Ishii never stopped fighting that battle.

Soon, Ishii started gaining ground. He’d lay some more chops in, he’d get a headbutt in. Ishii reversed a suplex into a DDT. Then he got Lee up and put him down with a suplex. Lee came back with a huge shoulder block, and then gorilla pressed him down for 2. After that, it became a battle of wills. These two rams kept going head first into each other at full speed, refusing to let the other one keep him down for long.

Lee went for the Doomsault, but Ishii moved out of the way. Ishii then hit a Pele kick, two lariats, and a stalling brainbuster to finally put Lee down for the three. An absolute spectacle. Both of these men are fantastic wrestlers, but Ishii in particular should get a hell of a lot more praise. His matches evoke a passion that isn’t there in most other matches. He is a beautiful, violent storyteller, and this was another classic in the catalog for Ishii. Go out of your way to watch this one. *****

This match was very odd. Goto was presented as completely ineffective and useless, as all three SZG members just laughed him out and kept putting him in submissions. There was a lot of Suzuki-gun shenanigans, as Desperado was liberally interfering. Suzuki used a chair on Goto. Suzuki and Sabre were just killing these guys for the longest time, putting double submissions on both guys. Ospreay eventually came back on both Suzuki and Sabre, with the exchanges with Sabre being extremely slick and fast-paced. Ospreay got out of an insane stretch hold by Sabre, and ended up hitting him with an OsCutter to get the win.

While I didn’t like Goto being treated like an absolute chump, this was a really fun match. The Sabre and Ospreay parts were really cool, and they made me ready to see them wrestle on Night 2. Hopefully, they keep the Suzuki-gun interference nonsense out of the way, because I think that match could be great. ***1/4

Buy this show. Watch Ishii against Keith Lee. Watch it again. Then watch it a third time. Other than that, Scurll/Naito and the main event are worth checking out. 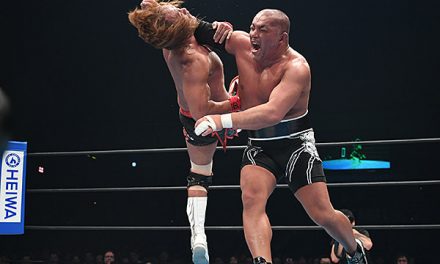