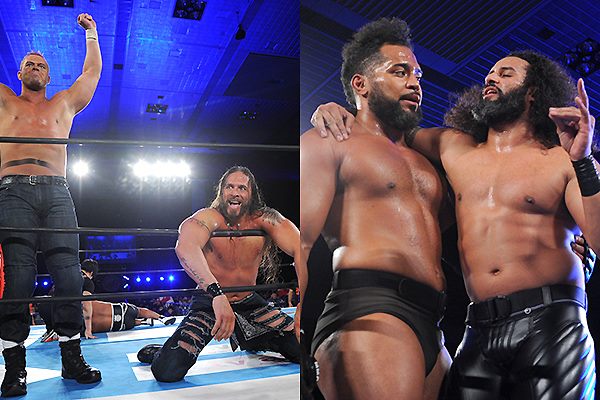 This was the first B Block contest on this card, and as a whole, it was solid, yet relatively standard. Finlay got in some early offense on Cobb, but for the most part, the team of Cobb & Elgin were in control. There were a few points where they got to show off their power, including a spot where they traded Finlay off a couple of times in a vertical suplex. Kitamura did get in a flurry of offense towards the end, but this wasn’t one of his better outings. At one point during the bout, there was a very awkward spot where Kitamura attempted to lift Elgin up in a Military Press, but dropped him. Thankfully, Elgin was able to adjust himself so he didn’t land on his head (that could’ve been a lot worse). In the end, Cobb picked up the win for his team after hitting Tour Of The Islands on Kitamura. A perfectly fine match, but not that memorable. **3/4

In a result that shouldn’t come as a shock to anyone, Beretta & Chucky T defeated Togi Makabe & Henare, moving to 2-1 in the process. This was a pretty solid match overall. Henare got a good chance to shine here, as he first took out Best Friends with a series of shoulder blocks before his previously injured ankle/foot came back to haunt him. From that point, he spent most of the bout selling as Best Friends worked over that injured limb. Makabe eventually got the hot tag and managed to hit some of his signature spots before Henare tagged back in. He showed a lot of fight in the closing stages, surviving a double chokeslam before later kicking out of a piledriver from Chucky T. Despite showing some great fighting spirit, Henare ultimately got pinned after he got hit with the Strong Zero (with Chucky T doing the double stomp this time instead of Rocky Romero). Again, this was relatively good. I would say it was a step up from the bout that came before it. ***

Lance Archer & Davey Boy Smith Jr. became the first team in the tournament to reach 6 Points and a 3-0 record after picking up the win here over the CHAOS duo of Ishii & Yano. This was easily one of the best matches of the tournament thus far. Of course, we did get some of the usual Yano shenanigans, but it was Ishii’s performance that really lifted this one up, in my eyes. He did an excellent job here in his role as the underdog babyface. KES beat him down for a number of minutes before eventually making the hot tag to Yano. When Ishii became the legal man once again, the match picked up a lot from there. The crowd really got behind the “Stone Pitbull” as he gave it everything he had against KES. Every time Ishii would kick out of a big double team, the crowd’s reaction got louder and louder. I feel like some people (myself included) mainly see Ishii as the one who’s usually the aggressor, or even a bully in some instances (as seen in some of his G1 matches over the years), but this was a perfect example of how he can be an awesome underdog. He had the crowd in the palm of his hands as he fought back time and time again, but ultimately, it just wasn’t enough. KES finally nailed Ishii with the Killer Bomb, and there was no kicking out from that. Again, this was definitely one of the best bouts in the tournament up to this point. If you’re a big Ishii fan, you’re going to love his performance here. ***3/4

If there’s any matchup in the New Japan heavyweight tag team division that’s been done to death over the last year, it’s been this one. These two teams have faced each other numerous times since they first clashed in last year’s World Tag League. Despite that, however, they always seem to have solidly good bouts every single time they meet (in a two-on-two situation, at least). They never blow you away, but yet they’re never really subpar. For the most part, I would say that this particular encounter fits right in with those other matches. It wasn’t spectacular by any means, but aside from a slow start, it was pretty good. There were plenty of solid exchanges throughout, and the crowd seemed to get more into it as things progressed. I do have a few minor complaints about this one, however. Towards the end, War Machine hit Tama Tonga with Fallout, and he managed to kick out on his own. I don’t necessarily mind the idea of having someone kick out of a tag team’s finishing move, but that’s something that should be saved for a bigger match. Don’t do it on some random night of the World Tag League. Something else that hurt this bout was the actual finish. Tama Tonga won the match for his team after he got Ray Rowe to pass out in his new submission finisher. It was hard to tell from the single camera vantage point, but it looked like Tama Tonga used a variation of Matt Riddle’s “Bromission” (I think it’s better known as “The Twister” in MMA). There’s nothing wrong with debuting a new finisher, but in this instance, it came off really flat. I’m sure it can get more over if Tama Tonga uses it more consistently, thus establishing it as an actual finisher, but until that point, it’s going to come off as a very underwhelming way to end a match. Even if it didn’t come off that well, the submission still got the desired result, as G.O.D. got their second win of the tournament. ***1/4

I should note that the actual main event of this particular night of the tour (Tetsuya Naito & Hiromu Takahashi vs. Kazuchika Okada & Will Ospreay) actually made tape, and is available to watch on NJPWWorld, along with the aforementioned tournament matches.

Night 8 was another solid showing from the B Block, proving once again that they’re without question the superior block in this year’s World Tag League. It featured one of the best matches in the tournament thus far in the form of The Killer Elite Squad vs. Ishii & Yano.

The rest of the bouts didn’t exactly set the world on fire, but again, they were all relatively decent, at the very least.

Here is how the standings look after Night 8: 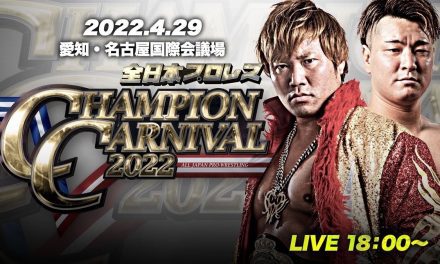