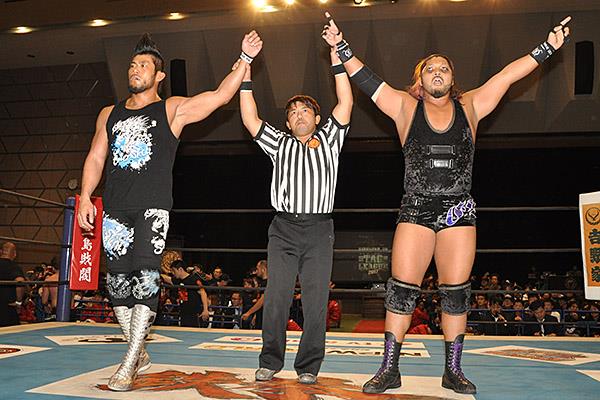 After some initial heel team vs. heel team shenanigans (The illegal Fale pulled on EVIL’s ponytail from the Bullet Club corner while the illegal SANADA did the same to Owens’ ponytail from the LIJ corner), this settled into the Bullet Club boys acting as the true heels of the match while LIJ became the defacto babyfaces. EVIL got worked over to build up the hot tag to SANADA. After some quick-fire SANADA action and a few cool combos, EVIL & SANADA put away Owens with the Magic Killer.

I like how each LIJ tag combo now has it’s own distinct finisher; EVIL & SANADA have the Magic Killer, BUSHI & Hiromu have Insurgentes, Naito & EVIL have Out of Control. Makes you wonder what a Naito/SANADA tag finisher would be. (Side note: There was a moment during the match that made me chuckle. EVIL did his move where he caught Fale’s leg, tossed it to the referee, and then he kicked Fale. But Fale’s leg is so big that the referee almost fell over!) This was perfectly average, nothing to cheer over but nothing to jeer either. Welcome to World Tag League, folks. **1/2

I like Sami Callihan in New Japan. He just brings a different energy to the proceedings. You don’t often see a man who looks (and let’s face it, probably smells) like a truck stop speed freak bouncing around a New Japan ring, so it’s pretty neat to see a guy like Callihan in this environment interacting with guys like Kojima and Tenzan.

Safe to say I can cross Sami Callihan kissing Satoshi Kojima on the mouth off my 2017 wishlist.

In any event, I thought this was a fun, hard-worked match between all four guys. Juice and Sami, while not outright heels, came off like hungry youngsters trying to stake their claim in the world, while Ten-Koji came off like their usual selves: Veterans of the game, a lot of city miles on their meters (especially Tenzan), but still having enough gumption and heart to take the fight to their younger opponents and make the match interesting. Kojima pinned Callihan with the Koji Lariat. You shouldn’t expect a blow-away match here, but this is easily my favorite match of the night. ***

I fought with callihan for the first time.

He is a wonderful fighter.

However, when he kissed me, I was upset.

There are many mysteries in the world of wrestling. 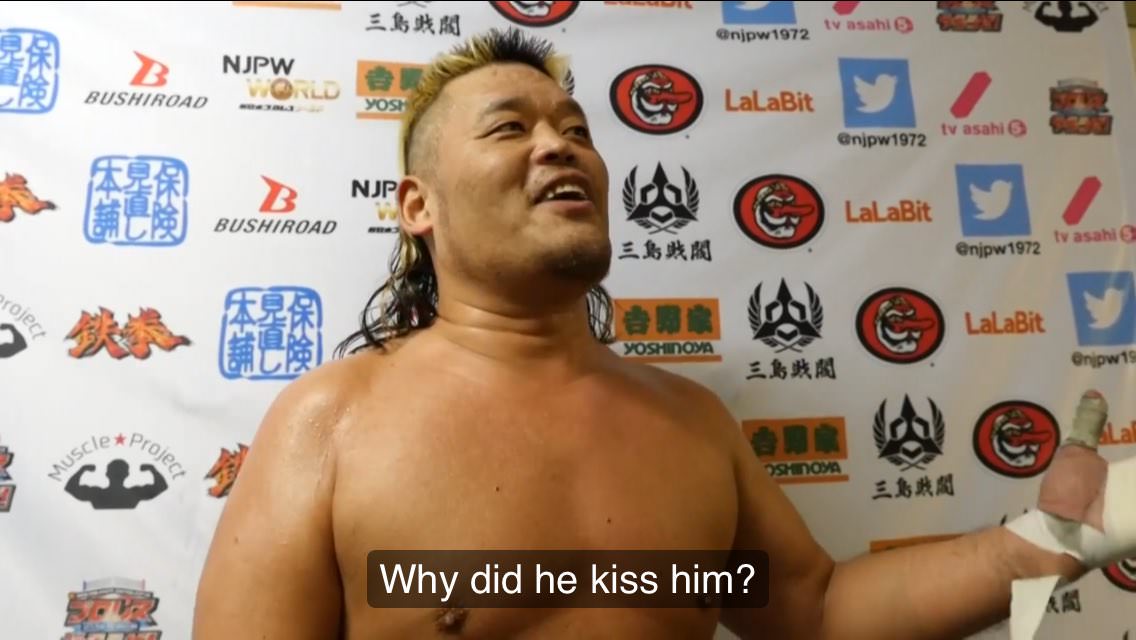 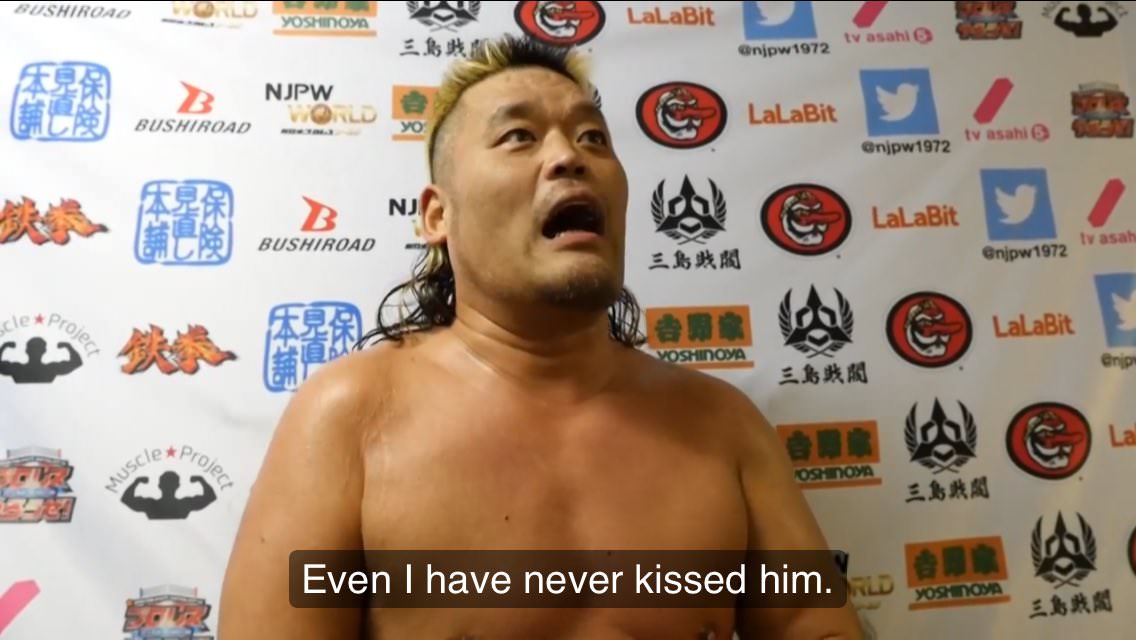 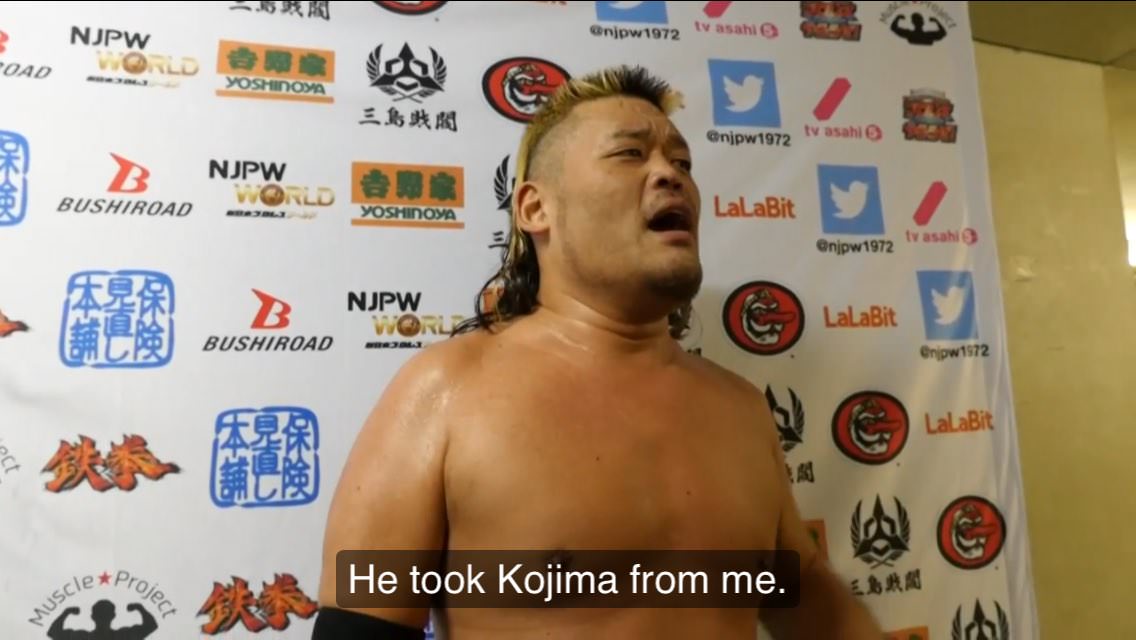 This match went exactly as you would expect given the participants involved. The slow pace of Manabu Nakanishi? Check. The crowd brawling of Minoru Suzuki? Check. The biting offense (literally) of Takashi Iizuka? Check. The saving grace of Yuji Nagata? Check. The only time I perked up during this match was when Nagata and Suzuki were in the ring together near the end. But even then it wasn’t anything special. Nagata ultimately kept Iizuka down for the three count with his Backdrop Hold. Go home, nothing to see here. *1/2

To me, this match mirrors the first one: Everything is A-OK, but nothing stands out to me. I like all four guys in it to varying degrees. Goto & YOSHI-HASHI are one of the three workhorse teams of A Block (along with EVIL & SANADA and Death Juice) and they’re always ready to put in a good performance. Hangman Page is a guy who I’m not over-the-moon about, but I think he’s solid. And I’ve softened up a lot towards Yujiro. He’s fine. They’re all at minimum fine. But ultimately I am not going to remember this match because it was just a match. I mean, what else is there to say, really? Watch it if you want. If you don’t want to watch it, you’re not missing anything. Page pinned YOSHI-HASHI with the Rite of Passage. **1/2 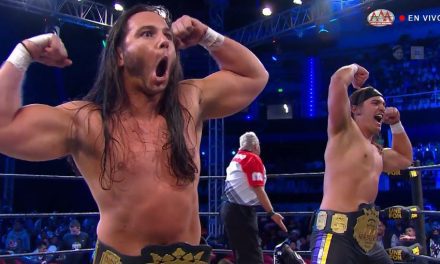