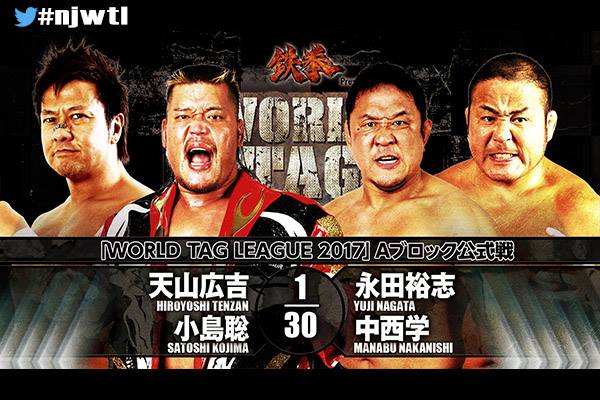 My apologies for the slight delay on this review. The Thanksgiving holiday had us distracted and while I would have loved to gather the family around to watch some hot, single hard-cam, no commentary A Block World Tag League, it just wasn’t in the cards.

Intra-Bullet Club World Tag League matches have long been a throne in the side of World Tag League viewers. Once a very interesting matchup between devoted stablemates, they’ve become passe in recent years as the stable continues to bloat. While often creative, they lack any disernable heat or intrigue. The story of this particular BC vs. BC match was both teams trying to prevent Bad Luck Fale from doing anything and instead relying on Chase Owens and Hangman Page’s ground game and mat wrestling to determine which team was the best. Each time Bad Luck Fale tried to slam, chop or really do anything, members from both teams ran to stop him. Fale continued to teach Bad Luck Falls throughout the match but would get cut off each time. The finish saw Yujiro attempting to “Too Sweet” Fale which gave Owens the opening to roll him up in a schoolboy. I promise you’ll find better ways to spend 12 minutes today. *1/2

Yer da and his pals had a few too many at the pub, started arguing about the ol’ drag racing days drag racing and decided to settle it at Kobe Sanbo Hall.

The average age of this match was 48 with the always, spry youngster Hiroyoshi Tenzan being the youngest at a mere 46-years-old. Despite the ancient participants, the match was a lot of fun with everyone working at a quicker pace than you’d expect. Not everything looked crisp or well-timed but there was clearly a ton of effort from all four men. You even got a Nakanishi crossbody so you know he had his working boots on.

To further emphasis just how important this match was to the participants we had a kickout at one spot (I shit you not) when Nakanishi bounced (well, slowly worked his way back up with some help from the ropes) up at one after a Kojima delayed suplex. Sick of these lads getting back up Kojima tossed his elbow pad to the crowd and hit Strongest Lariats on both Nagata and Nakanishi to secure the first points of the tournament for TenKoji. **1/2

This wasn’t very good and certainly wasn’t helped by the fact that half the match was wrestled amongst the crowd. Normally impossible to see on shows with decent cameras, this is a single hard-cam show so while they panned to where the action was, the famous “Can’t See Shit” chant was necessary. If you had a big enough TV you may have been able to see the action through the cell phone videos being taken by the crowd. I’m guessing even if you saw everything it wasn’t much either. The finish, ugh, came when Suzuki-gun’s El Desperado marched to ringside with a chair in hand. This distracted Red Shoes (our referee) long enough for Iizuka to get his Iron Claw on, slide into the ring and hit EVIL with the claw. Once staggered, Suzuki pounced finishing off EVIL with the Gotch-Style Piledriver. **

Sami has a real presence about him in NJPW. Having seen a lot of his matches live over the last two years, I wasn’t sure how well it would translate but the fans seemed to have taken to him. It also helps when you throw a chair into the ring to start off your entrance. What’s also stunning to see is how much of a babyface Sami has been thus far. He spent the first half of the match trying to get the crowd to chant for Juice complete with the uber-babyface tropes including slapping the turnbuckle and stomping his feet. It’s definitely jarring.

This was fine but once again and was the only match to truly feel like it had any importance. Death Juice (awesome name, by the way) worked their ass off and YOSHI-HASHI and Hirooki Goto are so good that they can make even the mundane look great. This was a five-star affair compared to the rest of the night but still wasn’t a lot to write home about. Death Juice picked up the win and continue to look like the A Blocks dominant team early on. ***

There’s a reason so many people use World Tag League as a NJPW vacation and nights like this are why. I appreciated the effort from the NJPW dads as well as Sami/Juice but this was a bland, boring show with very little to offer.