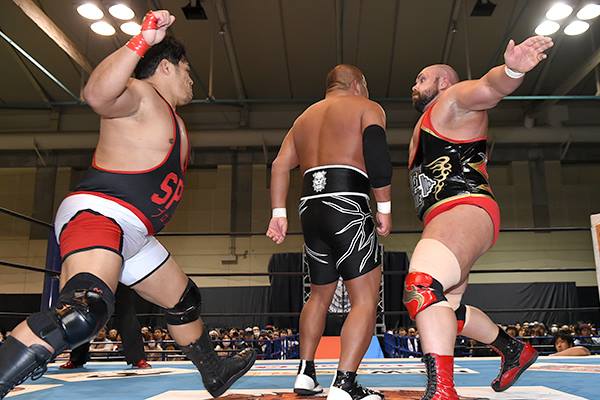 Chuckie T/Chucky T/Chuck Taylor/DUSTIN/whatever his name is this week was a lot more over on this show than he was at Korakuen the night before. People were confused by him as they are apt to be any time a new wrestler comes in, but it seemed he made a better impression on these fans here as he was given more shine. If I were New Japan I would sign him to a contract if he delivers on this tour and make him and Trent a regular team on the roster, which is in desperate need of more heavyweight teams. Trent is not a guy I could see being given a singles push anyway so it would probably be best for the both of them, Taylor not having work in many other places to begin with.

Tonga and Loa targeted Trent as a way of welcoming him to the heavyweight division and so Taylor ended up doing a lot of the work for the team. Not much out of the ordinary when it comes to G.O.D, lots heel antics and some crowd brawling with the babyfaces eventually coming out on top. Solid match, one I would have liked to see in a bigger building with all four on top of their game. Expect that most matches on this tour will be similar. ***1/4

Cobb is earning himself a contract. No way this man walks away from this World Tag League without a New Japan contract and a future singles push. He is way too over and has way too much potential to not be a guy they lock up. Was his performance here as good as his performance in Korakuen? No. Will he have much better performances as the tour progresses? Absolutely, but it was clear from watching this and watching his previous performance that this guy is made for New Japan. He conducts himself like a New Japan wrestler, he looks like a New Japan wrestler, he works the New Japan heavyweight style; he belongs in this company and I cannot wait to see his matches with the likes of War Machine and KES later on.

Yano thankfully stayed out of the way as much as possible. He had his moments but it was mostly Ishii in there with Cobb and Elgin, and interestingly, he was the one who took the pin. While it could have just been something they did to put Elgin over, you do have to question what it means for him, especially if this continues. Personally, I thought Ishii would be challenging Suzuki at the Dome, and if that is the case then Yano needs to be the one taking these falls. Regardless, this was a good match. About as good as you can get on these smaller house shows. ***1/2

Two solid matches, though nothing you need to see. Everyone was taking it easy being that this was really a nothing show, and who could blame them. As always, you can safely skip these house shows and just watch the Korakuens as the Tag League tour is rarely anything special.