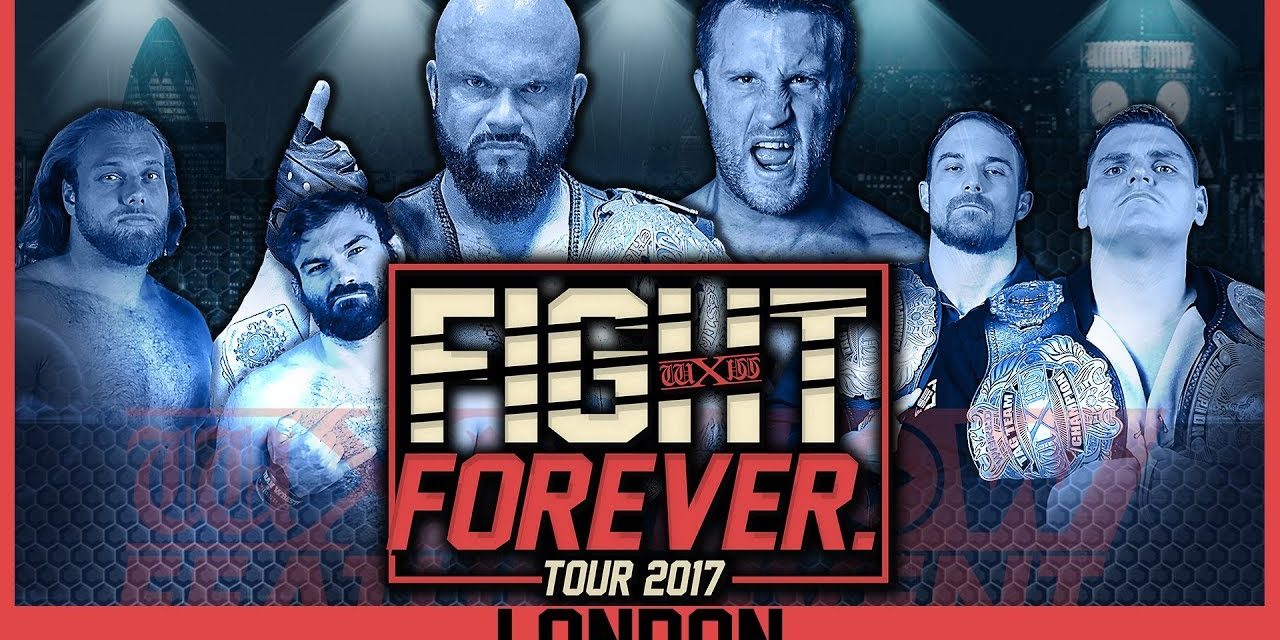 Germany’s premier wrestling promotion headed over to England for a stop on their Fight Forever tour as a part of a weekender with PROGRESS. The card was highlighted by the next chapter in the WALTER and David Starr rivalry and Travis Banks challenging for Bad Bones’ Unified World Wrestling Championship.

The show started with a promo from David Starr. He’s out here to talk about tonight’s show and how his tag team isn’t here tonight because Jurn Simmons is unwell. So instead he challenges WALTER to a singles match. Hosts are Alan Counihan and Jeremy Graves.

This was originally a tag match but Lykos still has a broken arm and isn’t cleared. Lucky Kid gets the “I should be so lucky, lucky, lucky” Kylie Minogue treatment, which is wonderful. Lucky Kid is a tremendous little weirdo and has rapidly become my favourite thing about RISE. His lunatic facial expressions are a highlight of this opener. Kid doesn’t get to do much in singles but this was a prime example that he’s a lot better than being stuck in a tag team with Tarkan Aslan. The match goes about 50-50, with Brookes doing a lot for Lucky Kid’s credentials. Kid does the rest, getting over his facials and general wackiness.

The pacing is great and it works as a hot opener. I had limited expectations for it, with no offence to either guy, due to their lack of history and concentration on tag action this year. Brookes plants Lucky Kid with the Jay Driller for the win. This way overachieved. Brookes reveals he’s in 16 Carat right after the match. I am very excited for this. ***1/2

Marius is here in singles action after being betrayed by Absolute Andy. I spent a few minutes explaining to Marius how great I thought the turn was while he looked absolutely miserable. Alan and Jeremy talk about how shocking the Andy turn was. It devastated everyone. Andy still hasn’t explained it. It’s been a stunning angle.

Mr. No Bullshit is in a better mood in the ring, although he looks surly throughout, having to deal with Emil’s heelness. The work is slick but not the most exciting. Sitoci is a fine wrestler but Marius needs to dominate and show off his cool shit. He does that here but it’s in between lengthy spells of Sitoci offence.It’s a positive for wXw that this was the match I was least into but it was entirely down to characterisations rather than work. The standard of wXw’s in-ring has risen pleasingly over the past couple of years. Al-Ani takes this with a frogsplash. Emil is job proof and Marius needed the win to rebound from A4. Decent wrestling but I wasn’t that into it. **3/4

Dante is getting a shot here despite wXw no longer being keen on him. The standard has gone up and he’s remained static. His job here is to make Avalanche look like the monster he is. Dante gets bowled over by Avalanche here. His range is improved and he’s pleasantly aggressive. Dante is a warm body, throwing clubbing rights. Avalanche does all the leg work here, even throwing himself into the air on the powerbomb spot. Dante is outmatched. Vaderbomb finishes an entertaining six minute hoss fight. **3/4

Starr has this ongoing issue where he just cannot beat WALTER. This is demonstrated in the early going where he tries a few different things but finds WALTER a solid brick wall of pain. Starr is more about determination than anything else. He wants to prove he can beat WALTER. It doesn’t go well for him. WALTER’s chops are murderous. There’s nothing in wrestling like them. He’s comparable to Kenta Kobashi, who’s the hardest striking chop-master I’ve seen in person. WALTER is at that level. Starr’s tactical approach is to work over the weapon that is WALTER’s big right hand. Starr’s other potential success is his flying. His tope is tremendous. He tries that here but gets caught and rammed into the ring post. Instead it’s his speed that gets the job done. He dodges a WALTER chop and let’s WALTER hurt himself; chopping the ring post. The best thing about WALTER is he has no time for botches. Starr slips off the ropes here and WALTER just grabs and powerbombs him. There will be no mistakes. Not on WALTER’s watch. I love that whenever Starr gains a little momentum he runs headlong into WALTER’s sheer explosive power. I also love that WALTER continually sells the injured hand, making sure it remains part of the match when most modern wrestlers would have let the injury go as it would interfere with offence.

Starr refusing to stay down and coming back for more, knowing WALTER is hurting himself, is sensational stuff. Starr’s counters are all sorts of great, flipping over WALTER or grabbing a hold or stealing WALTER’s spots. WALTER just slaughters Starr with a lariat for the win and Starr loses again. I love this feud because it’s all about Starr refusing to be put in his place by WALTER and getting closer and closer to a win. ****3/4

Toni is number one contender to the, as yet uncrowned, wXw women’s champion and walks out here with the PROGRESS title as a gentle reminder that she’s pretty much the bar for women’s wrestling in Europe right now. This is a tough spot for these two, as they have to follow that epic Starr/WALTER contest. Toni keeps finding herself in these tough spots, which is a complement as the promotions she wrestles for believe she can get a crowd back after a hot match. Nina is a decent wrestler so they do some mat work and it’s tidy. They do a good job of establishing Nina as a threat and Toni as a plucky underdog. Toni comes firing back with his signature stuff and the Strong Zero puts Nina down. This was fairly by-the-numbers stuff for Toni but her basement is getting higher. ***

I was really excited for this match. I love Haskins, and Dragunov has all these potentially fucking great matches against BritWres guys he’s not faced yet. This is the first of a hundred Ilja dream matches. As with Starr/WALTER the crowd are divided. Ilja is so fucking intense and he lights up Haskins with chops. Then they’re trading on topes and they’re both nuts.

It doesn’t take the Londoners long to get behind Dragunov. He’s a very special wrestler and it’s hard not to fall in love with his intensity. And if there’s one guy in Europe who can meet that intensity it’s Mark Haskins. They leather each other with chops and it’s a war. Haskins coming back with kicks after he’s been repeatedly chopped is so great.

Dragunov has had a string of great matches in wXw but this is proof that he’s untapped in the bigger world. The match is so good and the crowd love him, rightfully so. “Stop fucking chopping me” is a tremendous line from Haskins. It’s the point where he’s just had enough of the abuse and wants to end Ilja. The trouble is that Ilja is never done. Torpedo Moscow finishes! This was absolutely sensational and so well constructed. If only Dragunov was available to work in the UK more. The matches this man could potentially be having are mouth-watering. If it hadn’t been for Starr/WALTER people would be raving about this match. ****1/4

Thatcher comes in with a bad eye, necessitating an eye patch. Considering the number of drop-outs on this card I’m sure no one would have missed him wrestling. Davis is an emergency replacement with the card being reshuffled. He gets to break a few fans hands with high fives on the way to the ring and then break Tim with some freakish power moves. Davis will be a star sooner rather than later. He’s an imposing figure but the sheer impact of his moves is what’s impressive. Poor Tim eats a huge powerbomb but slips out into the Fujiwara Armbar for the tap out. This was brisk but both guys put in a shift. **1/2

Trav hits the Kiwi Krusher after 8 seconds and wins the title! Only he doesn’t because Bones has his leg under the rope.

When we get back underway Bones doesn’t fare much better, facing a barrage of topes. I’m reminded by Alan that Travis Banks is in 16 Carat this year, which explains why he’s been placed so highly on this card. That and the PROGRESS link. After the re-start the Germans get in fine voice singing “anyone but Bones” as he runs through his excellent offence on Travis Banks. They throw in a Canadian Destroyer for no reason at all. It’s such a weird move now.

Bones is facing defeat a second time when Lucky Kid runs in to save him. Trav has it with Slice of Heaven too only for Bones to kick out. Lucky Kid runs in again. It’s a tremendous stretch, which comes to an end when Lucky Kid pulls Tas out. Travis kills him with a tope. Bones takes advantage with a low blow and a double arm DDT to retain. Great match and they did a fine job of keeping Bones heel and involving RISE without it being overkill. Just a series of hurdles for Travis to overcome. Eventually it was too much for him. ****

Post Match WALTER and Tim Thatcher make the save when Travis is taking a kicking. After Bones and Lucky Kid have been run off we get WALTER cutting a promo. WALTER challenges Travis Banks to a match the next time wXw are in London.

wXw find another gear when they’re in London. They put on a great show in January and this Fight Forever show was the same. An absolute banger of a show with three great matches. 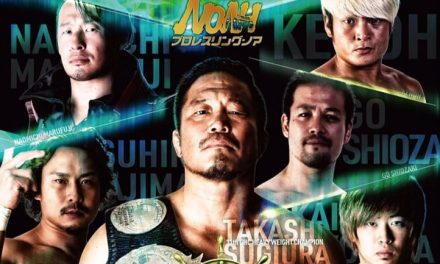