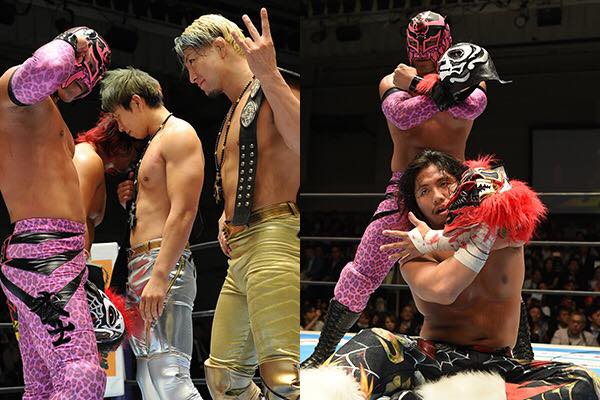 I usually stay away from New Japan Korakuen shows unless it’s a special show like New Year Dash or a singles league like the G1 or Best of the Super Juniors.

However, I decided change things up and check out the opening matches of the first round of the Super Jr. Tag Tournament.

I think I liked this more than Saturday’s match, which had Kitamura in Umino’s spot. The Korakuen crowd was hot from the start. It seems like they are teasing something between Leo and Oka. Umino is quickly improving and also looks like he is bulking up. Oka was solid as always and Leo looked more confident. Leo controlled most of the match until Umino had a quick comeback. Yujiro abruptly beat Umino in 6:25 with his Pimp Juice. **1/4

The fans ate up ACH pantomiming karaoke during Liger’s theme. Like Saturday night, ACH worked really hard and won the crowd over; I hope he stays around in New Japan next year.  The heels spent most of the mask ripping at Tiger’s mask, which they eventually got off. This was a fun trios match and a good preview for the remaining 1st round Jr. Tag Tournament matches. Taichi beat Taguchi with a Taichi-style Gedo clutch at 8:09. ***

This, along with the last match, did a great job of reminding the Korakuen fans about Suzuki-gun. With Bullet Club basically off the tour, Suzuki-gun are really the only true heels around. This match felt violent and Minoru, in particular, came off like a loose cannon, swinging his bull-rope like Stan Hansen.  Goto put away Iizuka in 9:38 with the GTR. **1/2

It shouldn’t be a surprise given the guys in this match, but…the match was surprisingly good. Maybe even great. Tanahashi and Ibushi are building up their chemistry for their tour-ending main event. It’s a minor touch, but Tanahashi has been doing a new (I think) Steamboat-style flying headscissors takedown. They had some really nice exchanges here and I am pumped for their title match.

For their part, Juice and Finlay are working on their teamwork and tandem offense, perhaps preparing for a run in the World Tag League. If Honma isn’t back for the Tag League, I would love to see Makabe and Kitamura form a team. Kitamura was great here. Well, he was good…but the crowd (including me) LOVED him. Other than another young lion later in the show, he probably got the best reaction of the night. It actually felt like he had a chance to pin Juice with a jackhammer. Given Juice’s momentum, that was definitely not happening, but Kitamura was so good that I bought in. Juice won in 13:11 with Pulp Friction on Kitamura. ***3/4

There wasn’t much new in this match, but it was very good. For the second time this tour, Okada entered from a separate side than his teammates. Okada seems to be trying to be more expressive and almost goofy before matches. Two fairly obvious, yet important things stuck in my mind. First of all, Tetsuya Naito is a great wrestler. As always, he worked very hard, taking crazy bumps on what is basically a televised house show.

The second point, which cannot be undersold, LIJ is the most over act in the company. Every time a chant was started for CHAOS, it was swallowed by a LIJ chant. I noticed more support for EVIL than last time I saw him in Korakuen, probably a credit to his Ryogkoku performance against Okada. There were just enough interactions between Naito and Okada to remind you that that’s the main event of the year. SANADA put away YOSHI-HASHI at 12:58 with Skull End. ***1/4

I bought my ticket to see this match. Furthermore, this match compelled me to spend 8,500 yen for a “special ringside” seat instead of 4,500-yen for my usual reserved (orange) seat. The reason is simple: Sho Tanaka and Yohei Komatsu are two of my favorite wrestlers.

Under-used during their North American excursion, Tanaka and Komatsu returned earlier this month as Roppongi 3K: SHO and YOH. SHO spent a lot of his time in  jiu-jitsu dojos and has great job of incorporating this experience into his evolved, unique in-ring style. YOH, on the other hand, is basically the same wrestler he was when he left. The problem for YOH, or at least one of the problems, is that Hirai Kawato is also basically that very same wrestler, perhaps even better.

Kawato was the star of this match. He hit a beautiful Prince Devitt-esque tope con hilo and unleashed the full arsenal of kicks that he has only flashed from time to time. He did a great job selling, too. His near falls towards the end of this match got the best reaction of anything on the card.

The crowd wants to support SHO and YOH, but their gimmick is currently a hindrance. They haven’t figured out their characters yet, and the crowd doesn’t know how to react or what to chant. Maybe they will make it work, but right now, I’d say they are definitely fighting an uphill battle.

Anyway, this was a very good, entertaining match that you should definitely check out. The champs won with their 3K combo in 12:39. ***3/4

It’s clear that BUSHI and Hiromu have put a lot of thought into their team. They have a mash-up entrance theme, split entrance masks and have been featured on New Japan’s website for the past few weeks. It’s always special to see Hiromu and Dragon Lee go at it, and this was no exception. However, on his side, Titan stood out most to me. He had a few breathtaking dives and some really slick exchanges with BUSHI.

Despite not getting the same geniune crowd reaction that Kawato and Kitamura did, these guys all worked really hard and put together a spectacle of a spotfest. LIJ won with a really impressive doomsday MX on Titan at 20:20. ****

Overall, this was one of the most enjoyable New Japan Korakuen shows I can remember this year. The highlights for me were the performances of the two young lions in big spots (Kitamura and  Kawato) and the main event. This show is highly recommended. 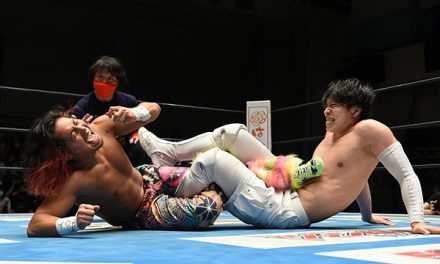 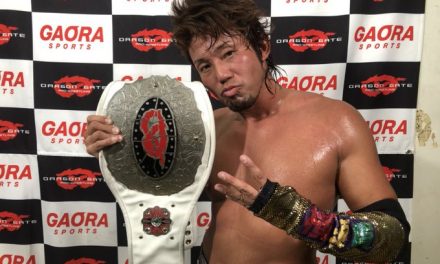