This feels like a very Superstars-y match and yet they never faced before.

Adonis smashed IMPACT with a plank last week thus this match. Solid match, IMPACT’s offense can border on silly at times but he’s different and fun and he stands out so usually I’m okay with it. IMPACT won with the IMPACT Senton Elbow Drop. Eli Drake and Adonis (eventually) beat down IMPACT afterwards before Garza Jr made the save. Drake has beaten up IMPACT three times now and we’ve yet to hear from IMPACT about it in any meaningful way – there is literally zero emotional hook to the Drake/IMPACT Bound For Glory match. **1/2

This match was taped in Cancun at the September 23rd AAA show. There was one person with an airhorn that should have been confiscated. The Impact lads worked together but that eventually broke down with everybody fighting for themselves. Not entirely sure what airing this match was meant to achieve – Texano won after Fantasma was distracted by Texano attempting to lure Storm into hitting his father with a chair. So the AAA guys aren’t working together and neither are the Impact team. Maybe it was meant to illustrate that these guys are all strange bedfellows and none of them really get along except in the name of company pride but I’m not sure. Either way, the match was pretty good. **3/4

Everett was accompanied by Trevor Lee and Caleb Konley—a collective that feels like a group of goofs who nobody could possibly care about. A match entirely lacking ambition – these two have so much more in them but they were pigeonholed into a short TV match built more around Trevor Lee on the floor than either man in the ring. Cutting guys like this loose should be priority number one for Impact in November. **1/4

Grado, who has been exploited for profit by Joseph Park after Park sponsored his visa and signed him to an exclusive sports management contract, called out Park.

Park may have been skimming just a little off the top of Grado’s bookings. Grado found the defendant guilty. Considering this segment was based entirely on backstage segments, shame on the crowd for unanimously finding Park guilty without evidence. Park, who quite effortlessly and masterfully pivoted into smug jerk mode, said he’d give Grado his visa back in he beat him at Bound For Glory. Grado signed the contract on the spot before Park revealed it won’t be Park he’ll be facing at BFG – it’ll be Abyss. And it’ll be Monsters Ball. James Mitchell appeared later in the show to threaten Grado.

This is probably the best programme on this show—Abyss is one of the most underrated promos of this generation and Grado is an utter showman.

This match was taped on October 5th from the Crash. oVe won with a double stomp/tombstone. **1/2

Dan Lambert came to the ring (kicking poor JB out of the ring) bragging about how much of a better fan of pro wrestling he was than the iMPACT! Zone. He pulled a bunch of old title belts that belonged to Ric Flair, Bruno Sammartino and The Road Warriors before saying the Jarrett family has poked the bear. Dan Lambert said he’s gonna end pro wrestling because they pissed him off. This entire feud has been pretty darn middling but Dan Lambert was superb here. American Top Team killed Stephan Bonner and Moose before Lashley laid both out with Spears. Based on this I’d be 100% okay with Lambert as a full time on screen manager. Reinvigorated this rivalry.

They didn’t make a huge deal over this main eventing the show which was nice, its just a thing that can happen – not something you’re making happen to pat yourself on the back. This was a really fun match. They started with a strong sense of urgency and carried that through a great deal of the match.

They actually conveyed their disdain for each other rather than just working their match, it was more visceral and physical. The finish was a little blunt, Valkyrie won with a Northern Lights followed by a double stomp and while that looked good they had previously established Road To Valhalla as Valkyrie’s finish. Another three minutes on top of this takes it to another level. Rosemary challenged Valkyrie to a first blood match at Bound For Glory to close the show. Rosemary losing again is worrisome but at least she got to stand tall this time. ***1/4

This show tricked me. The first hour looked like it was going to be the same old Impact, meandering admirably from start to finish. But then it’s as if they found a sense of purpose in hour two as the Grado/Park exchange, Dan Lambert’s promo, a James Mitchell cameo and a really enjoyable main event produced the best hour of TV this side of Slammiversary. 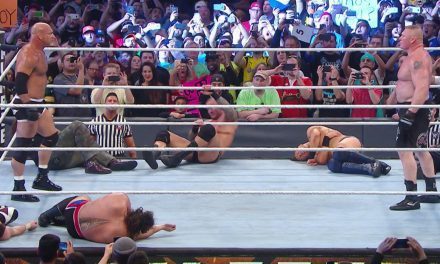