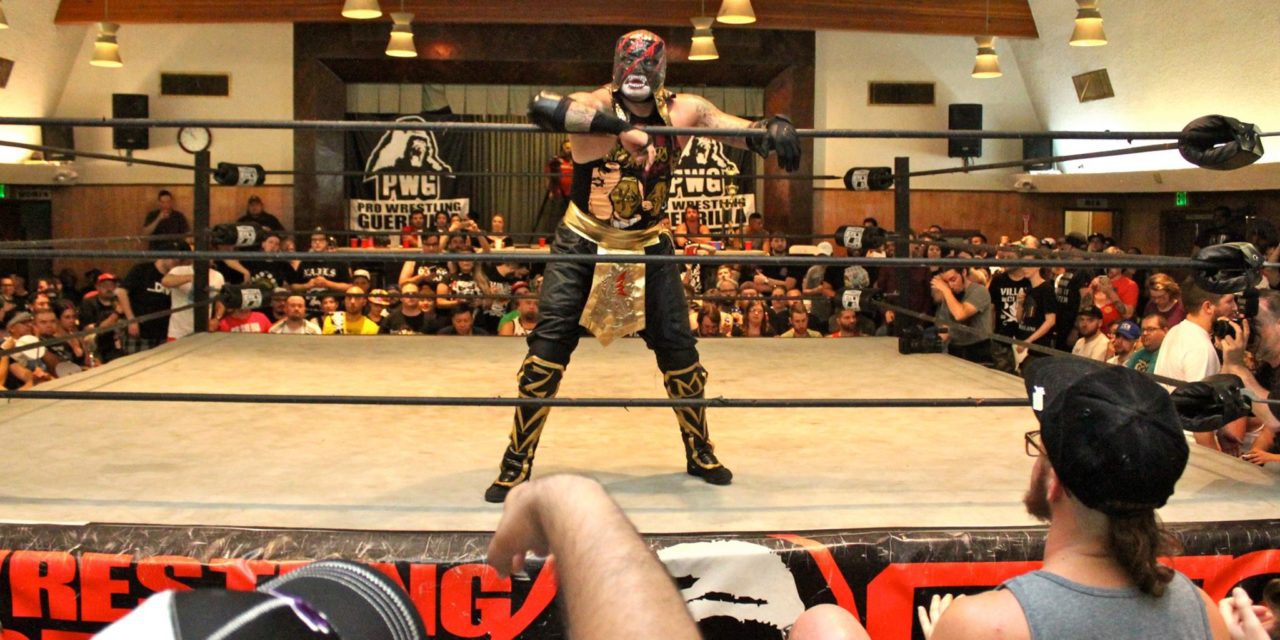 The DVDs have been delivered it and it is time to dig into the 2017 Battle of Los Angeles. This tournament, bringing together some of the best in the world, is PWG’s biggest weekend of the year and is one of the biggest indie wrestling events all year. Night one brings us six first round matches and one non-tournament tag.

Without further ado, let’s get to the matches.

I can’t imagine what it would be like to be as big as Brian Cage. While watching him toss Xavier around the ring with ease, I wished that I could spend a single day in his body, just to get an understanding of what it’s like to carry around all that mass and be that jacked. While Dezmond found himself facing off with the Machine in his very first BOLA match, Cage was entering his fifth of these tournaments.

Cage was an absolute monster in this match and it took everything that Xavier had to put him down. At times, the match felt as though Cage could have won at any time, it just all depended on the level of effort he felt like putting in. Talented as Xavier might be, he had to spend the match looking for the right opportunity to take Cage off guard and score a surprise win. And that’s just what he did, getting the three count following a yoshi tonic. This was a solid opener, but felt a bit weak by BOLA standards. Xavier was a bit awkward at times during the match, but that should be kind of expected when up against an opponent like Cage. I’ve seen better work from both men, leading to my disappointment in what was a good match. ***

Marty comes into this match as the defending BOLA champion and you could say that it went to his head a bit. The match opens with Scurll cutting a promo running down both Webster and the PWG fans, offering Flash a chance to rethink his entry into the tournament. He gives Webster to the count of three to leave the ring and after Marty counts one, Flash rocks him with a headbutt and quickly scores the three count.

Or so it would seem. The crowd erupted at Flash’s victory, but it was not a victory at all as Scurll had managed to get his foot under the ropes. Following the false finish, things move at a blistering pace with Webster throwing a flurry of offense at Scurll, culminating in a running crossbody into the front row. Two more highlight reel moments follow that one up when Scurll slams Webster into some chairs, leaving his back a mess of welts, and then later when a fan jaws at Marty too much and literally gets Flash thrown at him.

Marty Scurll spends the entire match underestimating Webster, even after almost losing the match very early on. There are several moments where Webster comes this close to winning the match, but Scurll manages to stay alive. Marty always finds a way to retain control of the match and after he grinds down Webster enough, he submits him with the chicken wing. Flash showed a ton of fire in this match and was hugely impressive. Marty came into this as the clear favorite and quickly turned the crowd against himself in expert fashion. These two put on a really fun match with an opening sprint that I loved. They told a great story and didn’t overstay their welcome at all. Honestly, this would have been a fantastic opener. ****

This is our third match in a row featuring a BOLA veteran (Fenix) taking on a BOLA newcomer (Horus). I really like that this match wasn’t a complete spotfest. They started things off with some lucha grappling before turning up the heat. There was a very deliberate pace to this one, taking astonishingly athletic moments and surrounding them with nasty offense from both men. Fenix was downright mean at times. This match felt like it would belong on any indie lucha show that was being filmed on a cell phone and I absolutely mean that as a compliment. There was something authentic feeling about this match that many lucha style matches in America are lacking. It was a perfect example of the variety of matches you get with a BOLA weekend. For as young as Fenix is, he really came off like a veteran here, controlling most of the match. Horus was great, but seemed a step or two slow after tweaking his knee early into the contest. Fenix picked up the win, submitting Rey Horus with a crazy looking, arm wrenching hold. This was a match that would have been a main event on any other card. ****¼

This is the closest that we’ll ever get to a Space Jam 2 and I’m okay with that. In fact, it was far superior to the original film. This was just four big boys throwing bombs at each other and it was tremendous. These guys could have taken it easy seeing as they’ll all have matches tomorrow, but not one of these four took the night off. While things started off friendly enough, the match quickly took a turn and the hoss fight began. This was one of those matches where my review pretty much boils down to “It was really cool.” The level of athleticism in this was off the charts. It’s not every day that you see boys this big doing flips. It wasn’t just the speed of the match that was impressive, the hits here were really, really hard. I’m not sure what did it, but at some point Cobb had a busted lip or nose and I’m really surprised that was the only blood spilled in this match. One of the greatest loves in my life is beefy dudes slapping each other and this completely delivered. I’d say that it was just shy of being MOTY level, but don’t take that as a negative, this is a must see. ****¾

Zero fear versus peace and love was the theme of this match. This is actually the only tournament match on this show that isn’t a battle between a BOLA veteran and a newcomer. Both men have prior experience in the tournament, with Matt Sydal having the edge in that department. It was an incredibly back and forth contest with neither man maintaining control for very long. The normally calm and collected Sydal gave into his more brutal instincts and hit Penta with a bunch of mean looking offense, probably paying him back for the hard open hand chops earlier in the match. As always, Sydal looked awesome, but I fear that he may soon be in the territory where he’s almost too good and becomes boring, much like a Christopher Daniels or a good chunk of the Dragon Gate roster. Penta is a fantastic opponent for a guy like Sydal and can act as a base for a lot of his offense, until he gets tired of it and boots him in the face at least. It looked like Penta killed Sydal by booting him out of the air on an SSP. Penta moved onto round two after hitting a sick looking running package piledriver. Really good match! ***¾

This is a clash of two former NOAH boys. It’s been quite some time since I last saw Rock in a match, so I can’t say that I was expecting for him to beat the tar out of ZSJ like he did. Zack’s attacks did nothing to slow down Rock as he beat the master technician all around the building. You’d think that Zack owed him money. It took Jonah’s leg getting trapped in the ropes for ZSJ to get a respite from the abuse.

Sabre would then spend the rest of the match picking apart the leg of Jonah Rock, all the while being tossed around and taking some of the hardest hits of the entire night. ZSJ was bumping all over for Rock and really made him look like a million bucks. It’s amazing how Rock came into this match as pretty much an unknown and within a matter of minutes turned Sabre into the underdog of the match. The word “monster” is written across the singlet of Jonah Rock and he live up to this moniker for sure. Sabre was only able to pull out the win after trapping Rock in an armbar, causing him to suddenly tap out. The ending truly came out of nowhere and felt all the more real for it. Both men came out of this one looking great. If you are a big guy that wants to look even bigger, get yourself booked in a match with Zack Sabre Jr. ****1/4

One thing that I really like about Ricochet is that as he has gotten older, he starts with the strategy to grind down and ground these high flyers that he finds himself wrestling, but inevitably succumbs to the urge to try to out fly them. We saw that in both the BOSJ matches with Ospreay and we see it here too with Flamita. In this instance, Ricochet does more than keep up with Flamita, he teaches the youngster a lesson. When you face Ricochet, you can’t just prep for his speed, you have to be able to deal with his strength as well. This is the mistake that Flamita made. He’s young and got a bit too cocky, but Ricochet literally slapped some sense into him.

The match moved at a bit of a slower pace than I thought it would, but it really worked for the story. Ricochet was shown to be on a completely different level than Flamita, almost as if he was in a match against himself from the past. The main complaint I have about this match is that Ricochet won in almost too decisive a fashion. While Flamita put up a good fight, I never felt like he really had a chance of winning this one. The other veteran versus newbie matches were more competitive than this one was and I would rather have had that in the main event. I’m making this match sound worse than it is, but my expectations for this were high, especially with it at the top of the card. As a whole, I enjoyed the match, but I was hoping for something more. ***¾

Night one of PWG BOLA was an awesome night of wrestling. There were no match of the year candidates, but with four of the seven matches at four stars or higher, this isn’t a show that you want to miss. The tag match in the middle of the show was the obvious high point of the night, but ZSJ vs. Jonah Rock was a strong second place contender as well. The two hour show was a super easy watch, especially with the hilarious commentary from Chuck Taylor and Excalibur to guide you through the night. While this isn’t a show of the year contender, it is well worth your time.