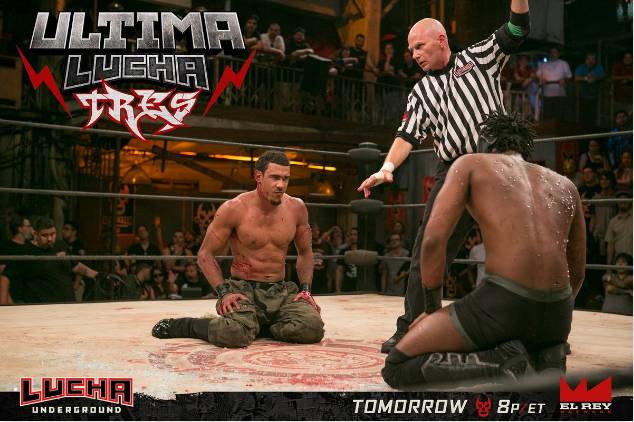 As always, if you want to help nominate matches for the Match of the Month project, head over to our subforum at voicesofwrestling.com/forums.

This was the best match from PROGRESS’ Wrestlemania, their Ally Pally show. We’ve seen how awesome Riddle vs Walter is, and Thatcher was actually quite great here as well! I lived through Thatcher’s terrible Evolve title run, but he seems to have found his calling wrestling in Europe again.

That being said, Thatcher was the third best guy here. Walter and Riddle were as awesome as usual here, with even more dynamic stuff they could do with another body in there.

Dragon Gate excels at this. While as a promotion they sometimes struggle with their big singles matches, their multi man matches blow every other company away. These men work with such speed and vigor it’s amazing no one ever gets lost or slips up. It’s truly a frenetic spectacle every time. I can’t believe how into Kotoka I am as a babyface.

If you told me a year ago I’d be more into Kotoka than Bayley or Sami Zayn I would’ve said you were nuts, but here we are.

This was an excellent plunder match! The tac spot at the end was truly unnecessary. Besides that I loved this, it mixed weapons and wrestling together in a perfect blend of violence. Jay White is a star. The kid’s got it all, it’s plain as day. Martinez is a big guy that can do some athletic stuff. He played his role well and let White carry the workload.

I had the pleasure of reviewing this show (so my rating and the VOW Rating are the same), and this main event made it all worth it. In terms of pure storytelling, this might have been the best match of the year. Omega’s selling of the knee had me worked the entire time. I would argue it was the best leg selling I’d ever seen in a match, eclipsing the Chris Masters performance against Drew McIntyre all those years ago on Superstars. I got empathy pains watching Omega sell, that’s never happened before. This entire match is a counter argument for anyone who thinks Omega only works high spots and big moves.

Juice was great here, putting in his best performance. He was integral in telling this story and his facials, selling and comeback were all on point. This match truly elevated Juice in my eyes, I could see him wrestle anyone and buy it now. That’s how you know this match was effective.

This was a hoss freestyle; an offensive onslaught of beefy men. When Shingo and Okabayashi did their elbow drop spot to Sato, I was convinced they were now the greatest tag team I never knew I wanted. It’s truly refreshing to see Shingo outside of Dragon Gate, wrestling men larger than him, it’s quite novel. At one point Shingo hit Sekimoto with an enzuigiri and Sekimoto walked right through it. I can’t remember seeing Shingo ever doing that, and if he did, no one in Dragon Gate would walk through it! There’s also nothing quite like feeling a counter lariat coming in a Puro match, and then it connecting and it’s as great as you’d hoped.

Sekimoto and Okabayashi also played to the crowd quite a bit, and the energy in this match was vibrant. The clash of these four titans may have been the most fun I’ve had watching a Japanese tag match this year.

I had the pleasure of reviewing this match when I reviewed King of Trios this year. This was the finals match, and a worthy final at that. The interactions between Pete Dunne and Meiko Satomura alone are worth your price of admission. Dunne was such a great prick in this match, turning what ought to be BSS’ home crowd against them early. Dash Chisako was an excellent babyface in peril and Satomura taking on all of BSS was breathtakingly compelling. One of the best Chikara matches I’ve ever seen.

Dragon Gate so rarely does weapons matches, that when they did here, it really felt special. And this deserved to be special, the Jimmyz were truly a beloved unit in Dragon Gate. Everything about them was charming. They were the outcasts, ultimate underdog unit. And Verserk were a bunch of meathead idiot bullies.

Shingo and Jimmy Susumu were awesome in this match. Jimmy Susumu is one of the more underrated workers in the world; he’s such an excellent babyface. And Shingo may be the best antagonist in wrestling since he turned a couple years ago. When this came down to Susumu vs Shingo and T-Hawk, you won’t find more compelling storytelling anywhere in wrestling. T-Hawk got a huge rub here, pinning 3 of the Jimmyz including Susumu, and his running knee strike is looking real strong. What a way for the Jimmyz story to end.

It’s so great to see Eddie Edwards working outside of GFW/whatever we call them now. It’s like the man disappeared off the wrestling planet the last few years. He’s been world champion in that company as well, but he hasn’t had a singles match like he was able to have here in years. I hope they’re not giving up on Nakajima, and matches like these are exactly why I hope that. The man is great in the ring and really only seemed to get better as his reign went on.

This really was a throwback NOAH style world title match. There were a lot of big moves, hard strikes and boundless fighting spirit. Eddie Edwards was totally game. He seemed thrilled to be able to have a match this good, with an opponent of Nakajima’s quality. I don’t know if we’ll see a rematch but I wouldn’t mind it.

To borrow a line from comedian Lewis Black, this match was STONE COLD FUCK NUTS. Now I know in wrestling, or with anything we enjoy, one can be prone to hyperbole. There’s no gimmick here folks when I say unequivocally, this was the craziest match I ever saw in my whole goddamn life. Part of me feels like it should be #1 just for holding that distinction. I honestly wasn’t even sure how to rate it. I’d seen Fox wrestle in person before and I knew the man was not only insane, but seemingly indestructible. But this was some next, next level shit. Considering the high stakes backstory the show had given these two characters, it all made complete sense.

I’m sure there have been death matches in the various death match companies that have technically done more than this, but this match didn’t just have brutality, violence and big bumps, there was some great athletic wrestling mixed into all of it. And the escalation of it all was perfectly executed. Lucha Underground is a show that has seen its fair share of hardcore matches, but this one takes the brutality cake by a mile. I’m never gonna forget this match.

Watching this match was almost like when I started watching great Japanese wrestling for the first time. It felt so fresh to me because I had never seen Ashino wrestle before, and this was only the second Jiro match I had ever watched. I can’t believe the man wrestled a 40 minute main event with his jacket on the whole time, including when he did a moonsault off a balcony to the floor.
Now there are holes in both of these men’s games, don’t get me wrong. Jiro’s strikes aren’t always great, and Ashino sometimes looks green in his timing in there. But that being said, these two pulled of a hell of a match and the best Wrestle-1 match I ever saw (though I claim no expertise in the field). The use of the German Suplex I really enjoyed in this match. The structure and pace here was brilliant. It always felt like they were doing new stuff in there, every sequence felt fresh. Ashino hit this twisting Jackhammer T-Bone suplex that I was sure was the finish, it looked so cool and unique. By the time this came together for the go home this match truly felt like an epic.

This match has truly made both men. Shotaro Ashino is the answer that Wrestle-1 needed; a true Ace champion who they can headline with and build around long term, which is something they’ve never had. Jiro is now a beloved perpetual underdog. The first article I wrote for VOW was about Japanese companies turning over and presenting their new young aces to the world. Some of those are working out better than others, but Wrestle-1 was not on that list. Well, now you can add them, they have made a real top guy in Ashino, a real champion, a true young Ace.