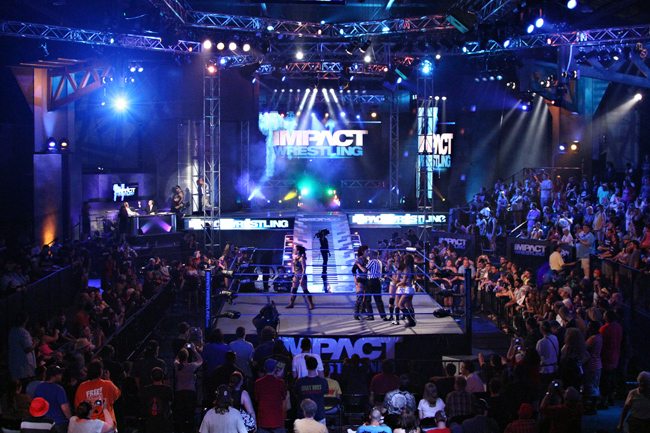 I like this moment. I’d like to think a lot of long time TNA fans like this moment. I go back and watch this two or three times a year. If you’ve read any of my writing about Impact for any period of time I come back to the theme of hope over and over again. Every year I write some variation of a “This Time Could Be Different” article looking at how maybe, just maybe Impact has finally learned the lessons of its failures. It never has. But I need that hope. Without it I’d just have futility and despair. Hope keeps my head above water when writing about Impact. I’m not in denial nor am I oblivious to the extensive issues the company has faced in recent years, but I am an unabashed cheerleader.

I want Impact to succeed to a degree that borders on the irrational. I would value Impact’s success above my own personal success, and yes, I know that is stupid and crazy.

The reason I like that moment so much is because for me it represents everything I’m hopeful Impact can be.

Sting, a legend and an icon with something left to give, passing the torch to AJ Styles, the very heart and soul of Impact. It felt like a sea change, a changing of the guard, the moment the older generation finally stepped aside to let the here and now push through. AJ was the face of that here and now. The man who did more to carry Impact through the dark years than anybody else, whether they liked it or not.

Hulk Hogan sauntered in with Eric Bischoff in tow and reformed the company in their image (literally in the case of Abyss), stripping out any sense of identity and continuing Impact’s long legacy of being a poor imitation of somebody else’s vision of wrestling. In spite of it not working out as I’d have hoped, I still get that warm fuzzy feeling when I watch AJ Styles being carried aloft around the Impact Zone by Daniels and the fans. I still see it for what it could’ve been — what it could’ve meant — rather than what it turned out to mean.

I don’t write about myself a lot. Partially because at no stage should I be the story when writing about Impact (that’d be rather self-indulgent), but equally because I don’t think I’m particularly interesting. I have, however, been working on various incarnations of this column for ages now. It’s been spinning around in my head for a while. I’ve always wanted to contextualize my own personal relationship with Impact. I am fully aware of how bizarre it is.

I have devoted more time to Impact than anything other single thing in my life. When I graduated secondary school, I went home and watched Impact. When I graduated college, I went home and watched Impact. To some that’ll seem a little sad and I’m more or less okay with that. It is a little sad but Impact has been as big a part of my life for the last decade as anything else.

I wouldn’t be a wrestling fan anymore were it not for Impact.

In 2006 I fell out of love with pro wrestling. WWE’s product was as bland and as by the numbers as you get. There was nobody I really clung to, indies were alien to me, and I hit that stage in life most wrestling fans hit where you either leave it behind or it becomes part of your life forever. I was ready to leave it behind. Then I stumbled upon a Christian Cage vs. Rhino match on a little show called Impact. Kurt Angle vs. Abyss was also on that show.

Shortly after my brother bought me a Best of the X-Division Vol. 2 DVD and away I went. I discovered a world of dynamic, athletic, engaging wrestlers like AJ Styles, Christopher Daniels, Samoa Joe, Chris Sabin, Sonjay Dutt, Petey Williams, Alex Shelley, Shark Boy and more. Those were the most formative years for me as a wrestling fan. I have a deep personal attachment to that group of wrestlers. The 2006 X-Division. They reinvigorated my love for wrestling.

They reinvigorated my love for wrestling.

Since then I’ve attended three WrestleManias, two Bound For Glorys, one WrestleKingdom and many more wrestling shows. Some of my favourite moments and memories from the last ten years of my life have been because of wrestling. I’ve visited three different continents and nine cities to attend wrestling shows. I know so many awesome people, some of whom I’d refer to as among my best friends, because of wrestling. I owe that to Impact. They will have as much patience and loyalty as I can reasonably muster because of that. As strange as it is to say, I would be a different person in a different place in life had I remained oblivious to what Impact even was. I’d be a fundamentally different human being had Impact never entered my life. What would I have done with the hundreds and hundreds of hours I’ve devoted to Impact? That’s an interesting thought and one I try not to ponder on too long.

But I can’t help but think about that sometimes. I wonder how I’ll feel in twenty years looking back on the huge time investment I’ve poured into this company that has threatened to go away constantly for the last four years. I wonder if Impact disappeared in the morning how would I feel.

Relief? That the company had finally been put out of its misery.

Regret? For something I put so much time into simply going away.

Anger? Because a company that had everything necessary to succeed constantly self-sabotaged to ensure it didn’t.

Sorrow? For something I enjoyed and believed in so much failing.

I’m not sure. It’d likely be a combination of those things but I have no idea how I’d feel. The times I honestly believed the company might die I felt a hollow emptiness. I’ve had a Death of TNA piece written for three years now and I desperately hope I’ll never ever have to publish it.

I have a deep emotional connection to Impact that is difficult to explain and even more difficult to understand.

Eleven years ago I adopted Impact as a cause. That’s no mean feat, Impact has rarely if ever rewarded loyalty. That’s why you see so many people who are diehard fans drown in a pit of their own forced positivity. You need to be pragmatic and practical to remain emotionally invested in this company for this long.

But there has always been a single, simple reason I’ve stayed with Impact for all these years.

I believe in Impact.

I believe in what Impact can be. There has never been a stage where I’ve looked at the Impact roster and not fundamentally believed in what that group of people could achieve. The Motor City Machine Guns should have been a modern Hardy Boyz who helped bridge the gap to a new generation. LAX should have been the hot Hispanic act most wrestling companies are so desperate to create. There has never been a wider gulf between talent and catalogue of great matches than with Gail Kim. The role AJ Styles, Bobby Roode and Samoa Joe have played on WWE television over the last year have showed what remarkable talents they truly are, even in spite of all three being in the later stages of their career. The potential of the individuals has never been in question.

I believe in the role Impact played as platform to develop talent, to give young fresh underexposed wrestlers opportunities to show what they can do. Give wrestlers who would otherwise have never received opportunities in other companies a chance to prove their worth, to develop and understand their own individual personalities. I believe in Impact as an opportunity for wrestlers to find themselves as performers, to hone television ready skills in an environment that allows for experimentation and failure. I believe in Impact as a place where wrestlers can have authorship over their own stories, not a world where they are simply landed in a ring and told who to be but rather they have a say in who they are and how they’re presented.

I believe in Impact as a place of innovation, where smaller scale allows for greater fluidity and responsiveness and invention. Rather than other slow-moving behemoths, Impact can react to feedback and a radically shifting media landscape to incorporate technology into wrestling for 2017 rather than wrestling for 1997—using size to their advantage allowing for a more personalised, approachable presentation.

I believe in Impact as a platform capable of producing cutting edge wrestling. Not wrestling based on what worked in the Attitude Era, nor wrestling based on what worked in the past, but rather wrestling tuned toward modern sensibilities. New ideas, new stories, new approaches, new characters, new technology. A land of invention and reinvention. A place where strong stories, consistent characters, clear stakes and satisfying pay offs drive the storytelling rather than the authors bumbling idea of what’s compelling. Impact still has the platform and the reach to do something special.

I believe in Impact’s potential to be all these things because at one stage or another the company has been. It may not have been for long, nor did it sustain, but Impact has been all of these things. And I look at the roster.

Trevor Lee could be every bit as important to the next fifteen years as AJ Styles was to the last. LAX are one of the most dynamic and inventive teams in wrestling. Eli Drake has grown and developed into the leading role he’s now been handed. Bobby Lashley has had one of the most remarkable late career resurgences in wrestling history. EC3 is still hovering on the edge of breakout star potential. DJZ, Andrew Everett, Sonjay Dutt, Dezmond Xavier and Petey Williams can match any of the best eras of the X-Division for raw talent. Rosemary is an absolute badass. The Knockouts division is stuffed to the gills with great talent and diverse characters. Matt Sydal, Johnny IMPACT, James Storm, Eddie Edwards and Moose all have plenty to contribute to a productive, competitive heavyweight division.

And so long as I believe I can never give up on them.