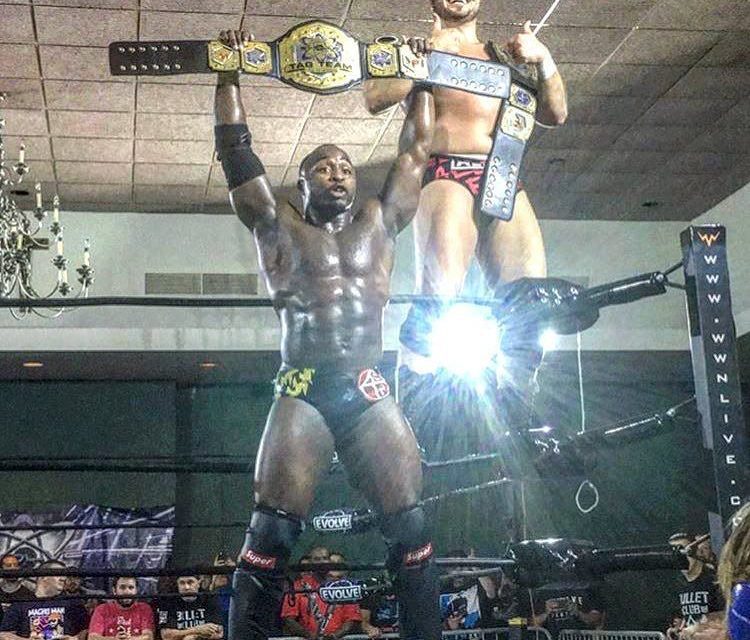 Who would have thought a month ago at the conclusion of EVOLVE 91 that the period between shows would be one of the craziest ever for EVOLVE? First, there was #HeatGate. Then, Davey Richards was announced for EVOLVE 92 and 93. Then, Davey Richards was pulled from EVOLVE 92 and 93 because of an injury. Then, Cedric Alexander was announced for EVOLVE 92 and 93. Oh yeah, then it was announced that FloSlam was suing WWN. And then WWN was suing FloSlam. Finally, just hours before the show, it was announced that FloSlam would not be showing EVOLVE 92 or 93 and the shows would be returning to WWNLive.com. With all of that turmoil, it was a bit hard to focus on what would be happening in the ring. What would happen at the shows? Would this affect the quality of the shows? Only one way to find out!

Sabre is wrestling Cedric Alexander in a main event dark match that is not airing later in the night, so he is pulling double duty wrestling in the opener. He starts things off by alluding to the controversy surrounding EVOLVE in the last few days, and then says that he cares about wrestling, not what’s going on backstage.

They start out with Sabre in control, which is for the best. I’ve mentioned this before, but I have run hot and cold on Kincaid, and I have started running cold more and more often. I find that he has some interesting offense, but he often looks like he’s thinking too much and his offense consistently looks light, especially while watching at home. I also feel his character work often impedes his wrestling, as he’s often forced to make strange decisions based on his character. Tonight it was choosing to sit up into a prayer position directly in front of Sabre who promptly penalty kicked him to the moon. Why would you choose to do things (in this case, sitting prone in the middle of the ring with your eyes closed) that put you at a disadvantage in a match? It just doesn’t make much sense to me.

With Sabre having missed a few EVOLVE shows competing in the G1, I thought that this would be a good way to re-establish him with a solid, easy win, but there was a lot of back and forth, and just like in the Jaka match from June, I thought Sabre’s opponent got in too much offense, making him look weak. In EVOLVE, Jason Kincaid is a wrestler who almost was fired for losing too many matches in a row and now he’s taking the champion to the limit? I understand you want to get the crowd pumped with the first match, but it doesn’t create a dominant champion to anchor your promotion.

The match was solid, but nothing spectacular. Sabre submitted Kincaid with the CFS1. ***

Stephen Wolf got this opportunity after impressing at the WWN Seminar and Tryout. From what I saw he looked pretty good, but I didn’t see enough, as this was essentially a squash match. I get that you want your established talent to look good, but I feel like I didn’t get enough of a chance to find out what Stephen Wolf is about. It might have been better to put him against someone else where he could have gone a bit longer and showed more offense. Theory won with a Theory KO. **

Tracy Williams has a problem. He’s paired up with Stokely Hathaway, and Stokely consistently outshines him. The announcers spent the whole first part of the match talking about Stokely: he was sad that Timothy Thatcher left him, what he had been up to (or not up to) in Detroit, how he was dressed. The list goes on and on. It makes sense to put Stokely with someone like Tracy, but there has to be a proper balance between manager and wrestler or one gets over and the other one doesn’t. The good thing is, it doesn’t affect Williams’ in-ring ability, which is still as strong as ever.

On the other side of the ring you had Darby Allin. Allin is really everything that Jason Kincaid is not. They’re both small, but Allin’s offense looks exciting, smooth, and painful. And even though he is small, you never think he’s out of a match because he’s able to pull a great move out of nowhere and he has exceptional facial expressions whether on offense or defense. It is really incredibly lucky that WWN found him, and I hope that they continue to put him in spots where he can shine.

Once again, the match was solid, but nothing to write home about. It was mostly a vehicle for getting over Williams’ heel persona, as he raked Allin’s eyes when Allin went to lock in his Last Supper Gibson Lock. He then rolled Allin up for the win. ***

This is DJZ’s first match in EVOLVE since EVOLVE 7 in 2011, where he beat Jimmy Jacobs. He fractured his colon in The Crash a few months back and some people thought he might never wrestle again, but here he is, which is pretty miraculous. Yehi was a bit of a strange first opponent for DJZ. They don’t have similar styles and, in my opinion, Yehi has been a bit aimless since his split from Catch Point.

The match was pretty good, and was a good opportunity for DJZ to show off some of his unique offense. Yehi won with the Koji Clutch, which will hopefully jump start him into something more worthwhile, because I think he’s been in EVOLVE long enough that he can be pushed out of his comfort zone. *** 1/4

This match was a big one, as it paired the two biggest stars in the company with what I think is EVOLVE’s best tag team. On paper, it had the potential to be a barn burner, and while I don’t think it quite lived up to that potential, it served an important purpose. The story of the match was the frequent miscommunication between Riddle and Lee. What started as a fun, lighthearted pairing ending in disaster as the two stars ended up costing each other the match and nearly came to blows after the match was over.

If EVOLVE has had one big storyline in 2017, it has been the rise of Keith Lee and his eventual showdown with the ace of EVOLVE, Matt Riddle. Although they wrestled once in June, you could almost tell at the time that the story hadn’t completely been told, and now we are seeing it come back to the forefront. I, for one, can’t wait. *** ½

Well folks, it’s time to talk about the Troll Boyz. There have been few acts as controversial as the Troll Boyz in EVOLVE history. I’ll just say it: I love them. I think the act is funny, but I also think that it is so different than anything else happening on the EVOLVE roster right now that it totally works. Yes, it’s goofy, but when it comes down to it, it’s also two really talented wrestlers. The story of weaseling their way into a title shot was perfect, and the end story of them “tricking” The War Horseman into a title match was really smartly told.

The match was pretty typical Troll Boyz. It started out with some humorous stalling before getting down to business in the middle and later parts of the match. It never really picked up into that next gear for me, but I thought the work was solid and all four guys worked well together to create a simple story: the Troll Boyz getting under Drake and Henry’s skin, before being forced to get down to business once Drake and Henry picked it up. The Troll Boyz were finally victorious after ACH hit the Buster Coll on James Drake.

I have enjoyed most of the War Horseman’s matches, but I’m glad that the titles were switched off them here. I never really understood why the titles switched in the first place. It seemed like a last ditch effort to drum up extra business on EVOLVE’s southern weekend, but switching the titles to help one show never really made sense to me. I’m interested to see where they go from here, as Henry seems like a much more natural fit on this roster than Drake, but I’m sure they’ll both still get some play in the tag team division. *** ¾

Overall, a solid show. Nothing was really bad, but there’s not much to go out of your way to see. The main event would be my one recommendation: not only is it a solid wrestling match, but it also advances a number of current storylines. I only wish that the Zack Sabre Jr.-Cedric Alexander match could have been shown, as I feel that match would have really been the best match on the card and wrapped everything up nicely. While I’m disappointed we couldn’t see that match, what we did get to see was easy to watch and all pretty good. 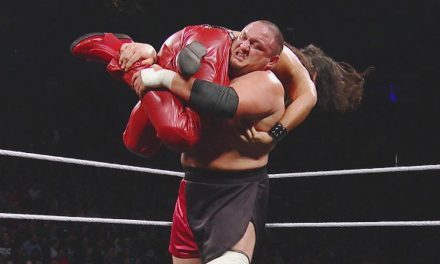