Katsumi Takashima was viciously dissected by Over Generation in this opening contest. Takashima, who already has a creepily lenky body, looked like he landed awkwardly on his leg in the early moments of the match. Yamamura, who at this time last year might’ve backed off, went right after the injured leg. Gamma, the veteran, followed suit. There was practically nothing Fujii or Watanabe could do but watch Takashima get torn apart.

Yamamura’s 2017 has been something special, and in a normal year for Dragon Gate, I imagine he’d be getting a lot more buzz. When he’s not lighting up the main event, he’s the star of the opening match and everywhere in between. He continues to blow me away. He practically tore Takashima’s leg off with a brutal submission for the win. Very fun opener. ***

More of a squash for the veterans than anything. I’m glad that U-T is back and that Shun Skywalker is wrestling in a match that isn’t the dark match. Nothing much to note here otherwise. **

North Tribe fell short to this longstanding Jimmyz duo in a brilliant 10 minute sprint. This is another notable Genki Horiguchi performance. In the two years that I’ve written Dragon Gate reviews for VOW, I’ve often joked about how great I think Genki Horiguchi is. He’s one of my favorite wrestlers ever. This year, due to the state of some of Dragon Gate’s shows in the early part of the year, I took a step back from my Dragon Gate viewing, both their current product and their pimped matches of yesteryear. Now that Dragon Gate is back, firing on all cylinders, I am for whatever reason more awestricken with Horiguchi than ever before. He’s not an all-time great in the same way that CIMA and Masaaki Mochizuki are, but Genki Horiguchi is one of the most proficient wrestlers I have ever seen.

This was quick, to the point, and I enjoyed the abrupt finish with Saito forcing Kzy’s shoulders to the ground after a SaiRyo Rocket. This match wasn’t the greatest by any means, but it had a spark that has been missing from Dragon Gate. Good fun. ***1/2

This is easily the best Ben-K singles match I’ve ever seen, which surprises me. I wasn’t confident going into this that two of the biggest, if not the two biggest men in Dragon Gate were going to mesh well, especially considering how inconsistent Yoshida is.

Yoshida jumped Ben-K at the bell, which for whatever reason completely caught me off guard. From there, I was hooked. They busted out all sorts of new offense. At one point, Yoshida put all of his weight down on K’s bridging chest, only for K to send him crashing to the mat with an Angle Slam minutes later. A Powerbomb was able to put Ben-K away just after the 8 minute mark. Much like the prior match, this was a lot of fun. Recommended. ***1/2

I figured Maria would come into this as the fall post, seeing as how she’s really been lost in the shuffle as of late. Instead, even in a match with the current Open the Dream Gate champion, she was the focus of this match. I was left with mixed feelings, part of me being excited because when Maria is at the top of her game, she’s an incredibly exciting wrestler that draws a strong emotional connection out of me. Sadly, a match focused around Maria also features a little too much comedy.

I loved the finish, I loved the in-ring work, I just hated the comedy with Susumu, Kagetora, and Maria. I’m not anti-comedy, or even Maria’s act, but when it takes place this deep in the card, it feels terribly out of place. That being said, she surprised Kagetora with a Crucifix Bomb and picked up the win for her team.

Somehow, I made it this far without mentioning YAMATO. That’s not surprising, as he was by far the least interesting person in this match. The product is improving, but YAMATO is stagnant. ***1/4

Masaaki Mochizuki is 47 years old, and he’s the best wrestler on the world.

That’s a lofty claim considering the year that Kazuchika Okada has had, but considering how technically proficient he is on top of the fact that he peaks higher than almost anyone wrestler in the world, I do not think there’s anyone better. Okada has more volume, Zack Sabre has everyone beat in terms of technical skill, but no one combines the two quite like Mochizuki.

He jumped Shimizu during his entrance with a springboard dropkick, reminscant in a way of his singles match vs. Shingo Takagi from 2015, which for my money is one of the 10 greatest wrestling matches ever. From the early portions of the match, it became abundantly clear that Mochizuki was going to try to target the arm of Big R Shimizu to take away the Shot Put Slam.

He kicked, yanked, and clawed Shimizu’s arm to a near-immobile status. Shimizu had bursts of offense, but he struggled to gain control of Mochizuki. If he wasn’t splashing down to the canvas and crashing down on Mochizuki’s ribs, he was often the one eating the offense, whether it be a barrage of kicks, slaps, or submissions.

Shimizu could only survive for so long. Mochizuki’s brutality was eventually too much for the big man, as Mochizuki simply grabbed Shimizu’s arm back and pulled it back as hard as he could for the submission victory.

This is my favorite Dragon Gate match of the year so far. Shimizu has turned into a phenomenal singles wrestler; few wrestlers in Dragon Gate, or any company for that matter, can produce as much drama he can in the finishing stretch of a match. I’ve said enough about Mochizuki. This is essential 2017 viewing. ****3/4

I was stunned when I saw this match went 30 minutes. These nine men crammed an hour’s worth of spots into a half hour in a match that felt like 15 minutes. The speed in which these wrestlers work still blows me away, and I’ve watched nearly every Dragon Gate match that has aired in the past four years and a healthy chunk of the archives that are available. This is the kind of match I highly recommend watching if you’re looking to get into Dragon Gate.

MaxiMuM as a whole has having one of the better in-ring years as a unit that I can remember for Dragon Gate, and it’s a real shame they’ve been doing it with such few foreign eyes on the product. Nine months ago, the Dragon Gate community was fearing that Masato Yoshino might not ever wrestle again. There were points in this match where he looked like the  most natural, healthy wrestler on the planet. Kotoka, who I’ve been very critical of in the past, has found his calling in MaxiMuM. He understands his role and executes it perfectly.

There were too many spots to recall, but this match was so incredibly smooth. It came across as dangerous and exciting, but no wrestler missed their mark at any point in this match. It’s a style and pace that only Dragon Gate can pull off.

This match ruled, all nine guys killed it, and had it not been for the semi-main, this would be the best DG match of the year. Essential viewing. ****3/4

Torbellino from Yoshino, Bakatare Sliding Kick from Doi and the Caldera from Kotoka!! #DragonGate pic.twitter.com/Fxi21hm71C

From iheartdg.com: On September 18th, Dragon Gate will hold Dangerous Gate. Verserk will be the ones that opens the door and brings the danger in. They will do so in the form of barbed wire. If they are defending the Triangle Gate or if they are defending their own existing, they will do so with barbed wire. The idiots in this god forsaken city will see a new side of hell.

Kotoka blew all that off to remind everyone that he was the one that scored the pin in the main event. He asked Shimizu to team with him and challenge CK-1 for the Twin Gate. CIMA wasn’t so enthused. Such is the life of the Twin Gate champions. They should be ready to defend against all comers. The challenge was accepted. He changed subjects to the Survival Race. Eita picked up a very important win today. After spending the entire month in last place, Over Generation are no longer at the bottom. Eita provoked everyone in sight. CIMA had to apologize for his lackluster microphone work.

MaxiMuM closed out the show promising to survive and return to Korakuen Hall in full force next month. 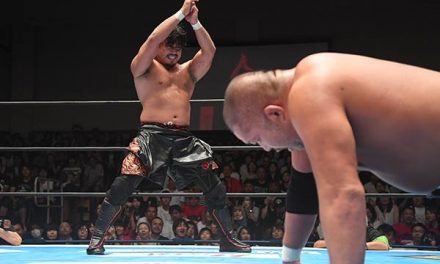