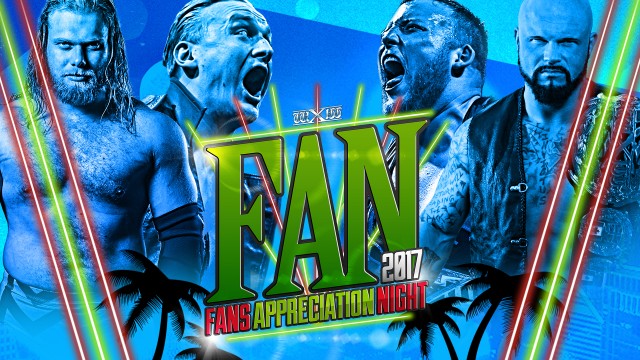 We’re in Hamburg’s Markthalle for wXw’s annual Fans Appreciation Night event, headlined by Bad Bones defending the Unified World Heavyweight Championship against Jurn Simmons. The main story heading into the event was RISE, wXw’s newest faction, had the opportunity to leave with all the gold.

Austin Powers lookalike Dirty Dragan isn’t someone I enjoy watching. Comedy wrestling has a time and a place but it doesn’t do anything for me and his gimmick goes down like a lead balloon every time I see him. He was accompanied to the ring by Young Money Chong and in the end it was a miscommunication involving Dragan and Chong that allowed Kaspin to hit the SOS and get the win. Kaspin has potential and this match wasn’t bad, but it was entirely forgettable. **1/4

This was originally scheduled to be a six-man tag match but Tarkan Aslan informed the crowd before the match that he was unable to compete due to an injury. I’m pretty sure he said he had some broken ribs but I wouldn’t count on the quality of my German translation.

Before the match could begin though, wXw Unified World Heavyweight Champion Bad Bones and Ivan Kiev laid the boots to A4 and Kim Ray. The beatdown lasted a bit too long for my liking but when the match got underway it was enjoyable. It was a little slow in places, and there were a few botches along the way (especially the finish, where Bouncer was all over the place) but A4 getting the win was a surprise and adds some intrigue to wXw’s booking ahead of the World Tag League. ***1/4

The King of Smoke Style is a dastardly young fellow and the rabscallion came to the ring wearing a Werder Bremen scarf, which was highly amusing and definitely riled up the Hamburg crowd. His opponent, Timothy Thatcher, is without doubt one of the most frustrating wrestlers to watch. In America he bores me rigid at times with his grapple heavy matches, yet in Europe he seems a changed man. Knowing that he is working with the young wXw guys in Germany for the rest of the year has me relatively excited.

Surprising though this must sound, this was great. For once there was no clowning around from Bobby Gunns, as he showed a lot of maturity and tried to match Thatcher at his own game. Thatcher brought a viciousness to his grappling that makes it believable and Gunns matched him every step of the way. Gunns won with a cross armbreaker after transitioning out of a rear-naked choke for the surprise win. If I’m being critical, I feel that they could have built to the finish a bit more, as it was obviously a big moment, yet it sort of came out of nowhere. That drops my rating a bit but it was still Gunns’ best performance by a country mile. ***1/2

Avalanche and his former Cerberus team-mate Ilja Dragunov were 1-1 heading into this match, so this match would not only settle their feud but establish a #1 contender for the winner of the evening’s main event. That is what you call simple yet effective booking.

Very few men take a beating quite as well as Ilja Dragunov and this match stipulation allowed that ability to come to the fore in the match of the night. They were physical from the get-go and they worked at a high speed, with Avalanche putting Dragunov through a table on the entrance ramp in the opening moments but it cranked up a gear when Dragunov was caught with a wince-inducing kendo stick shot to the head after coming off the middle rope. We had the return of Dreissker’s cowbell but in the end it was a top-rope powerbomb onto the chairs and a Torpedo Moscow headbut that got the win for the unbeseigbar one. ****

This match intrigued me before the show for a number of reasons. It was the match wherein RISE had the chance to win all the gold, and it was also a match that would introduce me to a couple of talents I’d seen very little of. I had never seen Ivan Kiev wrestle before this match and I’d only seen Flip Gordon once, so this match would be a great learning experience.

Positioning it here worked well as they worked a brisk pace and it kept the crowd engaged after the excellent match beforehand. Gordon showed some very flashy offence and some great dives, whilst Kiev brought much appreciated physicality. David Starr is a charisma machine and he was great here – him not being with one of the world’s biggest companies continues to baffle me. Kiev won with a falcon arrow on Gordon after Starr got distracted by John Klinger on the entrance ramp. Good stuff. ***3/4

Klinger won the strap from Simmons on the first night of the Fight Forever Tour after RISE beat the stuffing out of ‘The Marquee Player’. Both men are capable of great matches and I had hoped a good hoss brawl was on the cards to cap off Fans Appreciation Night.

Whilst that prediction was to some extent right, in reality the match was there to further the feud between RISE and the wXw guys. The action, in between the ref bumps and constant interference, was good but it never got the chance to get going. I understand that interference is RISE’s thing, but it dragged the match down and sucked any enjoyment out. My main gripe, however, was that it never felt like Simmons could win. Obviously the numbers game was against him, but there was never even the slightest glimmer of hope, which made it difficult to get invested. Bones eventually finished him off with a double-arm DDT after a belt shot. **3/4

Fans Appreciation Night was a solid yet unspectacular offering from wXw that continued RISE’s dominance as they now hold all the gold in the promotion. If you have a free couple of hours go and check it out, especially the Dragunov-Avalanche match but this wasn’t a must-see offering from the Germans.