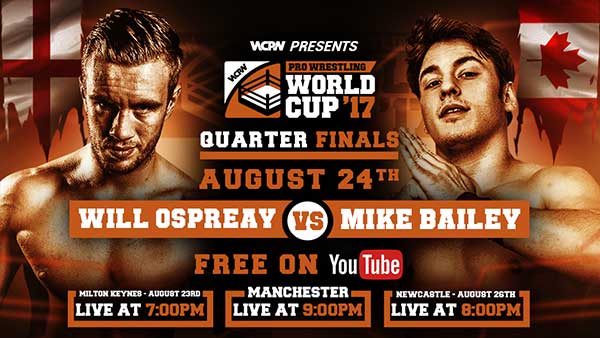 Following the Round of 16, WCPW ventured up North to Manchester to host the Pro Wrestling World Cup Quarter Final matches. The stream that aired only showed the second half of the live show, with the first half being tapings for their weekly show Loaded.

Bradshaw and Kennedy were again at the commentary booth.

Ricochet worked a more aggressive style than you’re used to seeing from him here in order to combat Penta’s violence, relying more heavily on strikes and ground and pound compared to his usual high flying offense. Both guys worked hard, but it devolved into trading big moves with a series of near falls without any of them really being believable as finishes. During this period things got very piledriver heavy for my taste; when three or four are hit without any of them feeling that important I think there’s a problem there.

We then capped off the match with a pretty dumb finish. Penta went for a surfboard stretch and pinned himself. Super anticlimactic, and it confused the crowd too. Very strange choice of ending, but Ricochet moved on to the semis. ***1/4

I made no secret of my low opinion of Joseph Conners’ ring work on the previous night’s review, and this match did little to change my mind. While it wasn’t close to as bad a performance as his one against Coffey, it was boring which is almost an achievement in there with Hiromu Takahashi, one of the most exciting wrestlers in the world. They worked a coherent match around Conners targeting Takahashi’s leg, but is just wasn’t dynamic at all; Conners makes Bobby Roode’s ring work seem exhilarating. Unfortunately we’re getting more too, as after just under twenty minutes (that felt like far longer) Conners caught Takahashi in a small package to advance to the semis. Blah. ***

These shows have clearly been poorly managed; match after match is going past the twenty minute mark and almost all of them would have benefited from going closer to fifteen. This show in particular was scheduled to go three hours and ended up just shy of four and a half. The crowd reactions consequently got worse the later things got, and you could see people getting up and leaving. This match is maybe the wrong match to make this comment on because it was really good, but it could have been great if it was more compact.

But yeah, this match was pretty spectacular. It took a while to get going, but once it did it was balls to the wall action. It felt like they were working a closing stretch for around the last twelve minutes! That came with its positives and negatives. The obvious one was that it really did feel like they kicked out of too much, and the match ended up peaking at around the fifteen minute mark and ended up having lost some steam by the time it eventually came to an end.

On the “doing too much front”, I really think Bailey would benefit from varying his offense a little more. In this match almost every move he did was either a kick or some form of flipping knee drop, and while both of those look great fifteen minutes into the match when Ospreay has already kicked out of 62 kicks and 12 knee drops the next four knees and eight kicks did feel like overkill.

I realise I probably sound really negative on this match right now, so I’ll plainly say that I enjoyed the experience of watching this match a lot. This was very indieriffic (there was a double clothesline where both men took backflip bumps for Christ’s sake) but at the same time incredibly fun. Both men were going all out, and they packed every second of this match with exciting action; you couldn’t fault them for effort. One particular highlight for me was Bailey hitting his top rope Shooting Star Knees to Ospreay’s chest when he was standing up. It looked incredible and I’d never seen that done before.

I know almost for a fact that some people will absolutely adore this match. I thought it was very good, but could have been great with a bit of editing. There was a great match in here, but what we got was bloated. It wasn’t helped by the fact this was four hours into a show where the crowd thought they’d already be home by this point, although that’s not to say that by the end they didn’t get a great reaction just perhaps not as good a reaction as they could have got. Ospreay advanced to set up a semi final encounter with Ricochet by hitting the OsCutter. ***3/4

These two have bad chemistry together. They do some nifty technical stuff, but it never evolves past that. It never steps up a gear. The match never felt like it had purpose. There were now peaks and valleys, it just existed. Existed for too damn long too. They lost the crowd, and it just went on forever.

I can’t call it a bad match. There were too many parts I enjoyed, too many good little sequences, and it was all very cleanly executed (aside from a slight wardrobe malfunction from Zack…). But as a whole it was incredibly disappointing.

I love KUSHIDA, he’s one of my all time favourite wrestlers. Every year Sabre has some of my favourite matches. But together these two bore me. They bored me with a bloated match at RevPro, and they bored me here. KUSHIDA won with a flash pin, and will move on to Saturday to face Conners. ***

We only got four matches here, no segments to be seen, yet it clocked in just shy of two hours. None of the matches here benefited at all by going as long as they did. It’s cliche, but less can be more, and to coin a phrase: ‘More is bore’.

Ospreay-Bailey was very good and Penta-Ricochet was a fine opening to the stream, but both Conners-Hiromu and KUSHIDA-ZSJ were both technically proficient bloated snoozefests. Time is a valuable commodity, and the Pro Wrestling World Cup Quarter Final show made very poor use of it.