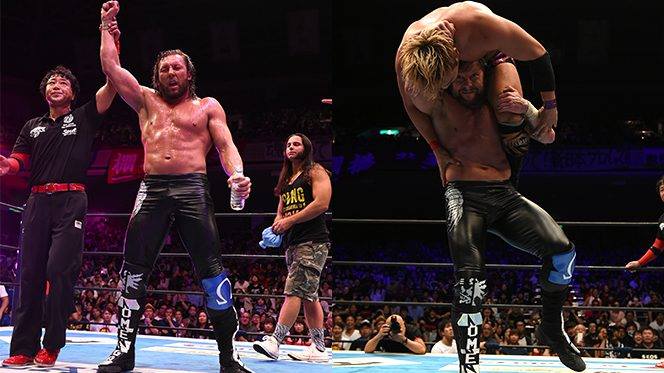 While both men were mathematically eliminated this was match was played up on English commentary as being a potential number one contenders match for Kenny Omega’s IWGP United States Championship. The real story for me though is how much each men’s stock grew during this tournament. Robinson proved once again that betting on himself was the best thing for his career but more than that, proved that he could hang with the main eventers in New Japan. Robinson continued to grow his cache with the native Japanese audience and seems primed for a huge year in 2018. With regards to Elgin, he sought out to prove he belongs in the company long-term. Not only did Elgin show that he unequivocally belongs, he may soon become one of the more underrated guys on the roster — a man more than capable of main eventing and running with the best of the best in the company.

This match, while fundamentally great, lacked a bit as the crowd was not nearly invested in either man as they were during block play. My favorite spot of the entire match was Elgin turning a Juice corner cannonball into a BUckle Bomb of his own. Like he did in his upset victory over Omega, Juice tried to get a flash pin on Elgin shortly after which woke the crowd up a bit. In what I would classify as a huge upset, Robinson won an exchange of blows with Elgin and ultimately finished #BigMike off with a Pulp Friction. That he won was one thing but winning after besting Elgin in a slugfest says a lot. In one week, Robinson has defeated both Omega and Elgin. Not bad for the former CJ Parker. ***¾

Carrying over the theme from the prior match, SANADA is someone whose stock has rose immensely in this G1. It’s going to be a slow build for him but we saw signs that when New Japan wants to flip the switch, they have a star on their hands.

Tama had a disappointing tournament again and may have proven himself as a tag-only worker moving forward. This match was yet another example of Tonga being respectable and solid but overall a step or notch below what we’ve come to expect from a G1 Climax participant. The first half of this match was all comedy with both men seemingly phoning it in with nothing to play for. The crescendo saw SANADA lock Tong in a Paradise Lock amidst the crowd. Yujiro Takahashi and Tonga Loa eventually ran down and couldn’t figure out how to get Tonga out of the lock. Eventually with the countout at 16, they started kicking at their fallen stablemate finally breaking him free from this lock. Tama ran back to the ring but smacked his leg on the guardrail trying to get back in. This caused there to be about 15 seconds between the 19 and 20 count but, hey, it was all in good fun.

After this point the match was all business with both men going back and forth until, to the shock of some (myself included), Tonga defeated SANADA with the Stun Gun. Once again this match was an example of Tonga’s competence. He’s not going to bomb but his peak in a singles match is limited. Good but not great. ***¼

A battle of former Pancrase competitors. No, seriously, Toru Yano competed in Pancrase . It didn’t last long, Yano lost his lone MMA fight to Osami Shibuya. Suzuki was obviously a little more accomplished in the world of MMA. You may also be surprised to know that Yano is 2-0 over Suzuki in their previous G1 encounters.

I enjoyed this match for about 15 seconds when Suzuki attacked Yano during his in-ring DVD hocking. Then, the Suzuki-Gun interference began. It never stopped with Taichi interjecting himself numerous times throughout the match. I just can’t do it anymore. Someone like Minoru fuckin’ Suzuki shouldn’t need help from Taichi to beat Toru Yano. It’s a crutch. When in the ring, Suzuki beat the shit out of Yano and had him begging for mercy. The second Yano would find his way outside, Taichi would beat on him while Suzuki distracted the ref. Why?

Suzuki, after a ref bump (seriously), wrapped Yano’s feet in tape. Eventually Taichi came into the ring with a chair which got Rocky Romero up from the English commentary table. Rocky took out Taichi before meeting his doom at the hands of Suzuki. This distraction gave Yano a chance to tie up Suzuki’s arms, hit him with a low blow and go 3-0 over Suzuki in G1 history. Maybe I just hate fun but between the interference, the tape, the ref bump and the chair shots, I really could’ve done without this. Hey, at least Suzuki made up for it by destroying the young lions with chairs. *½

Anytime EVIL had a spare few seconds he was jaw-jacking with Tenzan which makes me really want to see an EVIL/Tenzan match in the future. Honestly, I’d love to see EVIL, yet another wrestler whose stock skyrocketed from this tournament, go through a Katsuyori Shibata like run through the NJPW dads. This was the hottest match from a crowd reaction standpoint thus far as the crowd was firmly invested in the legend Kojima taking it to the youngster EVIL. Given his point total in this year’s tournament and the growing turnover of legends making way for NJPW’s next wave, fans know Kojima is on borrowed time. In all likelyhood, next year will be his final spin.

EVIL continued his tournament long theme of getting killed and took a few nasty bumps in this match including one apron spot that legitimately looked like it gave him a stinger. Let’s hope he takes a few weeks off after G1. He’s certainly earned it.

Kojima was so great in this match. At one point EVIL had him down and out, Kojima clutching onto EVIL’s tights beaten to the point of exhaustion. EVIL hit a gigantic lariat on Kojima which looked like it would be it but you can’t out lariat the king of the lariats. Kojima rolled through the lariat and knocked EVIL out with the STRONGEST ARM. So awesome. Unfortunately this was his last gasp. EVIL put Kojima away with a headbutt and the EVIL. In a sign of total disrespect, EVIL kicked Kojima while he was down earning himself some death stares from Tenzan. That match is happening. It has to. This was the match of the night so far and a great way for EVIL to cap off what could be a career-defining G1 Climax tournament. ****

The build to our main event (Omega/Okada) throughout the tournament and over the course of the year has been nothing short of brilliant. Okada, of course, defeated Omega at Wrestle Kingdom 11 in one of the most spectacular matches of all-time. They followed up that performance with another all-time great at Dominion, only this time it went to a 60-minute draw. In both matches, Omega’s ace in the hole was his One-Winged Angel finisher. He was unsuccessful in hitting it at Wrestle Kingdom and a Dominion he hit it once but Okada got his foot on the ropes. This establishes the possibility that if Omega does hit his finisher, it’s over for Okada. Likewise, going to a 60-minute time limit draw puts added pressure on this night as Omega has only 30 minutes to put away Okada. At Wrestle Kingdom, Omega played it cool and tried to work the long game with Okada but it didn’t work. At Dominion, Omega came out like a ball of fire but slowed down too much and let the match go to 60. He has 30 minutes to win, get into the finals and get a win in the series. At stake it a chance to go to back-to-back G1 Climax Finals, win consecutive G1 Climax championships and more importantly, have a chance at winning the IWGP Heavyweight Championship at Wrestle Kingdom 12.

A masterpiece. If at any time you lose sight of how amazing wrestling can be, you can watch this match or any of the previous two Okada/Omega matches from this year. You can keep raising the bar and these dudes are going to keep leaping over it. Those among us who get burnt out or bored of wrestling, get upset about booking decisions or wonder if the business is in a prolonged tailspin sometimes need a shock to the system, a wake-up call to just how unbelievable wrestling can be when it’s done well. This was one of those matches. A match that rewards you for all those hours you put into this hobby. A match that made you feel like you’ve made the right choice waking up at 3am or traveling across the country in a car with your friends to see it. There’s nothing quite like wrestling when it’s done to perfection and this was yet another perfect match from Omega and Okada.

As expected, Omega went for the kill quick with multiple V-Trigger attempts in the match’s opening minute. Realizing what he was up against Okada, too, started working quick and attempted an ultimately unsuccessful Rainmaker. Okada eventually slowed the match down hitting Omega with a top-rope dropkick and sending the action to the outside. While outside the ring, Omega tossed Okada into the guardrail establishing the theme of the match with Okada— nursing a sore neck made worse by Suzuki two nights prior—favoring his back, neck and spine and Omega smelling blood in the water.

Omega didn’t want to just win this match, he wanted to kill Okada, he wanted everyone in Sumo Hall and across the world know that he was the man and that he could beat Okada in the middle of the ring.

Omega was absolutely brutal in his attack of Okada’s neck including full-on chops to Okada’s neck, reverse huricanranas, apron snapdragon suplexes, Shouten Kais, german suplexes. The brutality was on another level and even caused a NJPW doctor to come down to the ring and make sure Okada could continue. Continue he did and for a brief few moments it appeared Okada could overcome the odds and pull this one out. Okada even hit a series of Rainmakers but was too exhausted to immediately capitalize and those precious few seconds where he had to gather himself and regain his air were enough for Omega to pounce.

The final few minutes of this match was the stuff of legends. Two all-time greats giving their best shots at this ultimate goal. Omega, flustered that he couldn’t hit the One-Winged Angel started sifting through his repositor by blitzing V-Triggers before hitting Okada with the Croyt’s Wrath, a move he hasn’t used since last year’s G1 Climax finals. Now confident that he could finally finish Okada off, he set up the One-Winged Angel in the middle of the ring and hit it perfectly. A masterpiece. *****

These men are your two Wrestler(s) of the Year, picking between either of them would be unfair at this point. Equally unfair is going to be trying to decide which of these should finish atop our Match of the Year poll. How do you distinguish such greatness? How do we even quantify matches with so much heart, so much thought and so much passion? Who among us can pick just one of these matches when there are so many layers, so much nuance and so much thought put into every step, every move, every counter. There is nothing quite like pro wrestling done at its absolute best and Omega/Okada III was just that.

Kazuchika Okada vs. Kenny Omega was a masterpiece of a match that has to be watched. As good as pro wrestling gets. 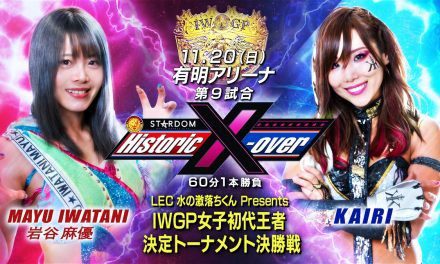 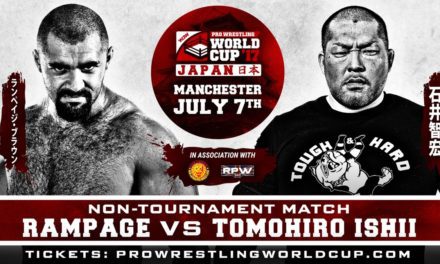