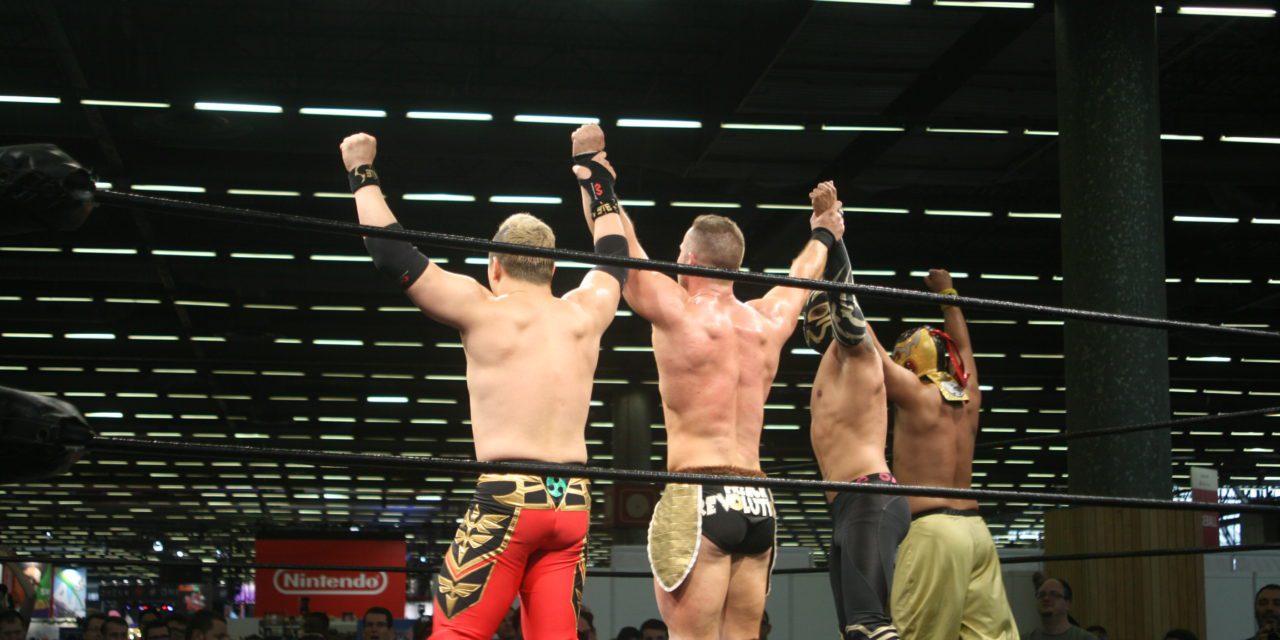 When it fills stadiums and arenas, draws more and more people each year to shows all over the world, and produces bonafide superstars even beyond the confines of the ring, it’s easy to forget professional wrestling finds its roots in travelling sideshows and vaudeville. A spectacle for everyone, something of a peculiar attraction that now has its own dedicated fanbase, but is still capable of attracting those who know nothing about it: that’s also what wrestling is, and the proof was in the pudding when the ICWA (International Catch Wrestling Alliance) built its ring in a corner of the Parc des Expositions in Villepinte, near Paris, for this year’s edition of Japan Expo.

The biggest Japanese pop culture festival in Europe has long featured “puroresu” as one of its many attractions, with stars such as Kana, Daisuke Sekimoto, Yoshinobu Kanemaru or Ultimo Dragon all performing at one point or another of the festival’s history. This year, the Japanese guests were Kotaro Suzuki, Andy Wu (W-1), Yoko Bito (STARDOM) and Konami, a well-assorted selection for such an event.

While some can be spotted around the ring in wrestling t-shirts, clearly present for this reason, most of the audience at the three daily shows seems to be composed of people who have no idea what they’re in for. They hear the booming voice of ring announcer P.V. Red, calling “come one, come all”, and gather around the ring, a mix-and-match bag of cosplayers, parents with their young kids, or casual attendees. They don’t know the wrestlers, barely know the rules, but it takes just a few minutes to get them into it.

The Japanese guests battle each other as well as some born-and-bred French performers, including ICWA founder Pierre “Booster” Fontaine, and receive reactions of genuine joy, fear, shock and excitement that are sometimes missing from more “in the know” wrestling crowds. The attendees of Japan Expo who stop by the ring to observe a match or two are, by and large, not wrestling fans, but they recognize the entertainment all the same, spurred on by the image of heroism or angered by a heel’s villainous antics. On the first day, in a French wrestling showcase, lanky but determined kid Jeremy Pépin faces off against brutish heel Hellmer, in front of a crowd that may be small, but still grows louder and louder at each of Pépin’s attempts to put his opponent down.

Wish I could've gotten the moment of impact but this'll do nicely pic.twitter.com/5dOtNlAzKS

With three shows per day over four days, and many of the wrestlers performing on at least two of these each day, they’re keeping things simple compared to more high-profile situations, but that’s not to say they’re not putting on a show. Sure, it’s not Korakuen Hall, but the Parc des Expositions still resonates with the sounds of kicks and chops, with the loud thuds of bodies hitting the mat, and with the unabashed enthusiasm of the crowd. Yoko Bito and Konami kicking each other as hard as they can, Andy Wu driving poor Senza Volto’s face into the canvas on multiple occasions, and Kotaro Suzuki’s well-perfected Tiger Driver all draw cheers (or boos), and while the crowd rarely exceeds 150 people, each of them is more into it than you’d ever imagine walking into this setting. When asked if they think pro wrestling can become a global sport like soccer, Wu and Suzuki give a firm “yes”, and showcases like this might just be among the steps it needs to take.

The last match of the four-day run was a “Japan vs France” tag match, with Wu and Suzuki taking on Senza Volto and Tristan Archer (better known to some as CWC participant Clément Petiot). Archer and Volto know they’ve got the advantage, as they’re on home turf, and play to it as much as they can, while Wu and Suzuki are no slouches themselves, easily slipping into heelish territory to pander to a crowd who wants to believe in the hometown heroes. Eventually, the Japanese team pulled out the win, and these four days of excitement and sportsmanship ended with due respect being shown between all four competitors.

ICWA calls itself “La promotion qui vous rend fier d’être fan de catch” – “The promotion that makes you proud to be a wrestling fan”. Sometimes, as a wrestling fan, it’s easy to be sad, ashamed and angry at the seemingly constant cynicism and snark thrown around, the fact that most discussions devolve into petty arguments, and the general air that people would rather talk down about things they dislike than hype up the things they do like. Everyone is guilty of it, this writer included, and the resulting atmosphere can hang heavy on one’s enjoyment of the sport. But watching the work and effort of Booster, Red, referee Yann Le Kersaudec, and of course all the invited wrestlers, to make the shows as accessible and enjoyable as possible for the largest number of people, that renewed my love for wrestling and definitely made me happy to be a fan of it. When a young kid runs to Tristan Archer or Kotaro Suzuki, with stars in their eyes, and wants to take a picture with their newfound hero, it’s hard to suppress a smile.

In the end, as big as it is today, wrestling still is a sort of travelling circus. Characters that exist beyond imagination or reason, fights that get the blood pumping, and entertainment for all.

On the second day of the convention, I was lucky enough to be able to speak to Suzuki & Wu about a few subjects. Here’s what they had to say.

(note: our time was unfortunately reduced due to the interpreter arriving late, apologies if you sent in a question and we did not have time to cover it. The scheduled interview with Yoko Bito & Konami was also, unfortunately, cancelled due to a scheduling error. My deepest apologies to anyone who sent questions for them. Thanks go out to Charlotte Demougin from Games of Com and Pierre “Booster” Fontaine from the ICWA for allowing this interview to happen.)

On the younger generation & the concept “old vs new”/”veterans vs new generation” that’s often explored in wrestling:

Suzuki: “Working with them, I can see that the field is bigger and more varied than ever before. There’s a really impressive output of young talent all over. However, some of them seem to favor flash over substance, and haven’t quite mastered the basics as a result. I think it’s good that they get to compete with veterans. It helps them learn and grow into better performers. But we’re not falling behind either!”

Wu: “I’m a part of the new generation, so I see as competing on two levels: against the veterans to prove ourselves, and against each other to get a head of the pack. There’s so much young talent that there’s always the risk of being left behind, so we also have to fight to distinguish ourselves from the crowd.”

On favorite and dream opponents:

Suzuki: “Out of everyone I’ve faced, my favorite opponent is still KENTA. No doubt about it. As for a dream opponent, I’ve always wanted to face Rey Mysterio.”

Wu: “My favorite opponent is El Hijo del Pantera. We haven’t faced each other in a few years, so I’d love it if he were to come back to Wrestle-1 one day.”

On what is Suzuki’s fondest NOAH memory:

“In addition to my fights with KENTA, I think my favorite thing I did in Noah was my team with Ricky Marvin. We had a really good time.”

“It’s not from any movies, but rather my own training. Kung-fu has been a big part of my life since childhood, it has  inspired and influenced my work ethic, and it also became the inspiration for my character.”

On whether they think pro wrestling can become a global, mainstream sport:

(On our way to the press room, Suzuki was wowed by the impressive Gundam figurines booth, as well as the cosplayers. His favorite installment, for those who wondered, is Unicorn)

And that's a wrap!!! Thank you so much @icwacatch for organizing this, it's been a pleasure ?! pic.twitter.com/7eaH7eEDeN