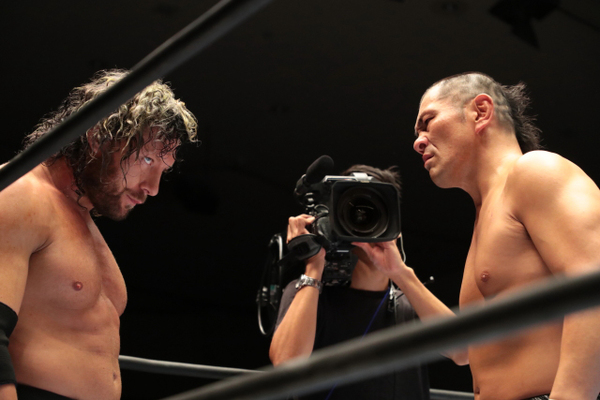 This match was building toward the much anticipated Sabre/Ibushi match tomorrow night, which Kevin Kelly said many people wanted to see in last year’s Cruiserweight Classic. Speaking of which, I wrote a column about the Cruiserweight Classic and the aftermath of it on this very website! Ibushi and Sabre were only in the ring together for 2-3 minutes, but they looked very smooth together as expected. This was another huge opportunity for Kawato, and I think he did very well. He got a ton of offense in on Desperado and had the crowd chanting his name on multiple occasions. It has been said multiple times on this website, but New Japan may have something big with Kawato here. Desperado got the pin on Kawato with a sitout facebuster. ***1/4

This was building to both Nagata/Goto and Makabe/Ishii, and if the interactions here were anything to go by, those are two matches to look out for tomorrow. Makabe is at his best when he hits people hard and when he isn’t in the ring very long, so he looked good in the ring against Ishii. Nagata and Goto’s interactions were less wild, but no less hard-hitting. Gedo and Tiger Mask closed it out with Gedo’s cheating attempts failing, leading to Tiger Mask getting the fall. ***1/2

Normally when a wrestler gets new music, it grows on me after a while and I get comfortable with it. It’s been six months, and I still despise GO ACE. This match builds to Tanahashi/Fale tomorrow. This one struggled to keep my attention. Fale and Owens worked over Tana’s arm. This crowd was very cold on Finlay. Finlay’s lack of excursion has really held him back, as he’s in this weird purgatory between young lion and real roster member. Fale pinned Finlay with a Grenade. An easy skip. **1/2

Naito and Yoshi-Hashi wrestle tomorrow night as well. Their interactions were fun, but this match was a lot of Jado selling which wasn’t good. Jado was moving in slow motion here. Very standard action, but the crowd did get into the finish. Jado had Bushi in a crossface and Bushi was going toward the ropes, so Jado kicked off the ropes to roll back into the middle of the ring. But Bushi rolled through again and got a roll-up cover for the win. Nice finish, but another one to skip. **3/4

The story of Juice Robinson never gets any less inspiring, but his story in New Japan has been told so well. He came in a young lion, and slowly he became a full-fledged roster member. Last year, he was given singles matches and showed great improvement. His improvement was noticed on a much larger scale at Wrestle Kingdom when, filling in for Michael Elgin, he put on a great performance against Cody R. He got his shots at the NEVER and Intercontinental Titles, once again showing steady improvement and hanging with top-level guys like Goto and Naito. Now, he’s in the G1, and he has a stellar match with Kojima.

Not only is Juice’s story great, this match was great too. Juice’s tagline is “Heart and Honor,” and he showed a lot of heart here. Kojima had the advantage for a good chunk of this match, but Juice was getting his shots in too. Juice hit a big crossbody and was looking for another one when Kojima hit his leg with a lariat. Kojima then hit a cutter off of the top rope and a Western Lariat to the back of Juice’s head, but Juice kicked out. Koji then hit the Lariat the right way round, but Juice kicked out again. Another attempt from Kojima missed, which allowed Juice to hit a big left hand and Pulp Friction for the win. The biggest win of Juice Robinson’s career, and a damn good match to boot.  ****1/4

This match at the start was very solid. I really like Tama slithering and sliding out of the way of his opponent. I’ve never seen anyone do it before him, and it’s pretty cool. Tama hit both his Cross Rhodes variation and his jumping DDT, but both only get 2. Elgin cut Tama off with a huge lariat. Elgin tried to hit a slingshot shoulder-block, but got caught with a Gun Stun that sent him to the floor. Tama brought him back in and only got 2. Tama went to the top before Elgin cut him off. Elgin went for a super Falcon Arrow, but Tonga switched it into a Gun Stun in mid-move to get the win. A hot finish to a very solid match. ***3/4

This was a match that had a lot of people buzzing, especially after the LIJ Civil War tag match from Night 1. I had high hopes for this one, and it exceeded my expectations. It started off decent enough. They brawled for a little while before Evil hit Sanada with a chair on the outside. They have a solid match before Evil sends Sanada to the outside and goes to the top rope. Sanada caught up with him and hit an insane cutter from the top to the floor.

Back in the ring, they trade forearms before Evil lays Sanada out with a lariat. Sanada kicks out at ONE, and they go into a fantastic sequence that ends with a fisherman’s suplex into the corner. These two are going fast and furious here. Evil puts his new submission on Sanada, but Sanada gets to the ropes. Sanada gets the Skull End and Evil slips out, but Sanada hits a Tiger Suplex for 2. They go back and forth countering finishers before Sanada gets the Skull End. I thought that would be it, but Evil got the ropes. Sanada followed it up with a moonsault for the win. I may be the high man on this match, but I don’t care. The last five minutes of this match were absolutely fantastic. ****1/2

Thus begins the G1 of Toru Yano. It’s impossible to predict who he’ll beat, but it is almost a guarantee that he’ll end up with 4-6 points. This match had me convinced at times that Yano would get the win and completely ruin my pick-ems. The match itself was harmless fun. Gedo and Jado on the outside added to the shenanigans, and there was a four-way dick punch spot that did make me laugh. In the end, Okada got the win with Red Ink. This will almost certainly end up as Yano’s best match in the tournament. **1/4

This was another very good match. Suzuki brought Omega into the crowd and smashed his knee with a chair. Omega’s selling of the knee was, per usual, very good. It wasn’t cartoony, but it consistently bothered him, to the point where he had to do his corner moonsault on his good leg. Suzuki was in control for most of the match to this point, and as soon as Kenny got momentum, Suzuki pulled the referee in the way of a V-Trigger. Desperado, Taka, and Taichi come in to interfere (which doesn’t bode well for the rest of the tournament), but Chase Owens and Bad Luck Fale come to run them off. Omega hits a gorgeous dive to the outside to take Suzuki-Gun out.

Suzuki almost immediately got Omega in the leg grapevine submission. Suzuki transitions into a few submissions for a few minutes, but Kenny does eventually get to the ropes. They have a great sequence that leads to Omega spitting in Suzuki’s face. Suzuki then unloads with palm strikes, but Omega catches him with a knee and a dragon suplex. He can’t hold the bridge though because of his bum leg, more smart selling from Omega. One-Winged Angel gets rolled through into an Ankle Lock by Suzuki, which he transitions into the Sleeper Hold.

Suzuki tries to transition into the Gotch-Style Piledriver, but Omega wouldn’t go up. Omega catches Suzuki off the ropes with a V-Trigger, but Suzuki catches him off the ropes with a dropkick. They screw up a reverse rana, but Kenny makes up for it with 2 V-Triggers. The One-Winged Angel gets Kenny the win. It was good, but when you hear Omega vs Suzuki, you expect a little better. Crowd was hot for it, which helped, but the SZG interference has me dreading the rest of this tournament. ***1/4

This was a very easy show to watch. Fun opening two matches, and four G1 matches that ranged from good to fantastic. Even Toru Yano’s match was tolerable. Highly recommend this show. 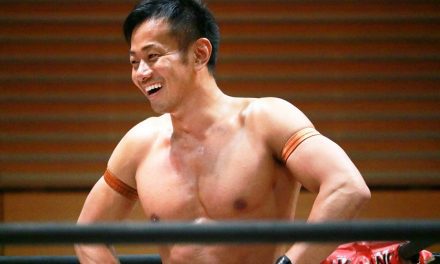