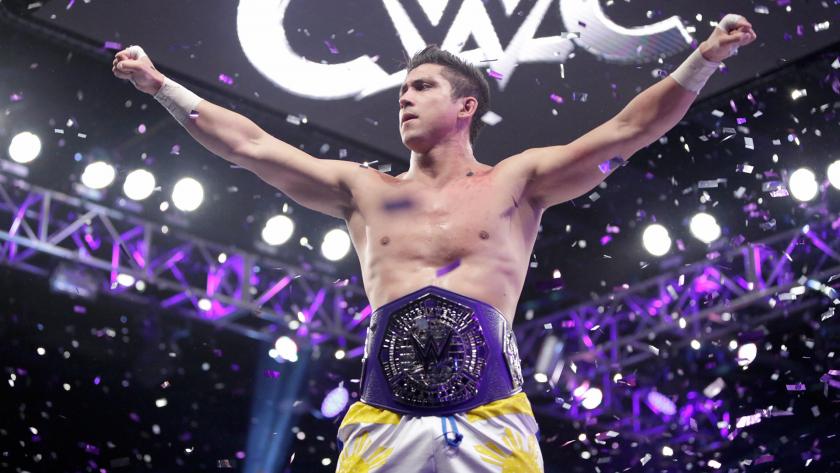 After months of speculation, qualification, and anticipation, the WWE aired the first episode of the Cruiserweight Classic on July 13, 2016.

What ensued over the course of the next ten weeks was pro wrestling presented in a way the sports-entertainment conglomerate had never presented it before. Wrestling presented as sport instead of soap opera, with video profiles to help build a personal connection to wrestlers who most of the WWE Network audience had never seen before. Combine that with a stellar in-ring product, and you get one of, if not the, best tournament in WWE history.

Ten weeks later, a champion was crowned as TJ Perkins defeated Gran Metalik in the finals to not only win the inaugural Cruiserweight Classic, but the revived (or newly introduced, depending on who you ask) WWE Cruiserweight Championship. The cruiserweight division, much like Eric Bischoff, was back and better than ever.

With another CWC seemingly on the backburner, let’s look back at the big names and big stories from the first Cruiserweight Classic last year, and see what ended up coming from it. The Stokely Hathaway endorsed-TJ Perkins was not favored by many to get far in the tournament. In fact, when he beat Johnny Gargano in the second round, many considered it a huge upset. Whenever people thought Perkins was done, he just kept winning. He was the underdog of the final four, going against the popular and incredibly skilled Kota Ibushi, and then having to face either Gran Metalik or Zack Sabre Jr. But TJ Perkins did what he had done his whole life: he persevered. He fought against the odds and to the surprise of everyone (except Stokely Hathaway), he won the Cruiserweight Classic. A star was born.

Then he showed up on WWE Monday Night Raw. He spoke in video game terms. He had unmemorable matches with Brian Kendrick. And the piece de resistance, the winner of the Cruiserweight Classic lost the title before the cruiserweight exclusive show 205 Live even began.

One year later, the newly-renamed TJP finds himself firmly slotted down the card, having recently lost a title match to the new Cruiserweight du jour Neville. It’s safe to say, a star has died. One of the most memorable stories coming out of the CWC was the story of one The Brian Kendrick.

Having not been seen in the company since 2009, Kendrick spoke candidly about knowing his career was winding down. He spoke about blowing opportunities other wrestlers would die for. He knew the odds would be against him, but he’d be damned if he wasn’t going out without a fight. Kendrick fought like his life was on the line, because in his mind, it was. Sure, he kicked Raul Mendoza’s teeth out. Yeah, he fought dirty against Tony Nese. He didn’t care. Each win was another day the dream stayed alive.

But then, Brian Kendrick stood across the ring from the Golden Star, Kota Ibushi. He used every trick in the book. He even hit a Burning Hammer. Ibushi was just too good. The future had passed Kendrick by. To add on to the heartbreak, Kendrick’s friend Daniel Bryan came down from the commentary booth, where he was openly and unapologetically rooting for Kendrick. He got to the ring in tears, and gave Kendrick a hug. The clock struck midnight. The dream was dead.

There were so many things that made the Brian Kendrick a character to root for. So naturally, he turned heel within six weeks on the main roster. Kendrick would have an unremarkable run with the Cruiserweight Title, losing it to Rich Swann on the debut edition of 205 Live. One year later, he’s had feuds with Akira Tozawa and Jack Gallagher, but never came close to the run he had over the 10 weeks of the CWC. The story of DIY, Ciampa and Gargano, in the CWC was one of the most memorable and well-done stories WWE has done in recent years. The tag team both entered the tournament and found themselves across the ring from each other in the first round. In the first standout match of the tournament and a MOTYC, Tommaso Ciampa beat the shit out of Johnny Gargano. The time came for Ciampa to put Gargano away…but he couldn’t do it. He didn’t have the heart to put his friend away like that, and it ended up costing them the match.

In between the first and second round, DIY had an NXT tag team title shot against The Revival. In that match, The Revival went after Gargano’s knee and made him tap out to retain the titles. After that, Gargano went on to take on TJ Perkins in the second round of the CWC. Gargano was in control before he hurt his knee again on a dive. This allowed Perkins to get Gargano into the knee bar and tap him out. (Side note: The Gargano/Perkins match was taped before DIY’s title shot, meaning Gargano was selling an injury that canonically hadn’t happened yet. Incredible.)
After this, most people were expecting Ciampa to turn on Gargano. After all, Gargano cost Ciampa the CWC. Gargano cost Ciampa the NXT tag titles. And Gargano couldn’t even win another match in the tournament? DIY were headed for splitsville, and it looked like it was coming on the final night of the tournament, when they took on Cedric Alexander and Noam Dar in a tag team match. But, DIY won that match. They went on to win the NXT Tag Team Titles at Takeover: Toronto in what was my match of the year in 2016.

However, time never healed those wounds.

One year later, DIY is dead. Ciampa attacked Gargano after losing a ladder match for the tag team titles at NXT TakeOver: Chicago. The story of DIY was a rollercoaster of emotions, and it all started with the Cruiserweight Classic. Cedric Alexander was a very hot prospect coming into the CWC. One month after announcing his departure from Ring of Honor, people were excited to see what Cedric could do with this opportunity. He would knock it out of the park, having a fantastic match with Kota Ibushi in the second round. The match was so good that the crowd at Full Sail University chanted “Please Sign Cedric,” with the hopes of the higher-ups getting the message. The message was received loud and clear when Triple H came out in front of the crowd, shook Alexander’s hand, and gave the crowd a big thumbs-up. He took a chance leaving ROH, and only one month later, he’s getting a handshake from Triple H. Cedric Alexander was a made man. Kota Ibushi was the biggest wild-card of the tournament. Having recently returned to action from a neck injury, he was the biggest outside star in this tournament by far. Despite the large amount of hype surrounding him, he managed to not only meet expectations, but surpass them. His matches with Cedric Alexander, Brian Kendrick, and TJ Perkins were three of the best matches in the entire tournament. He did TV matches for NXT, and it was rumored that WWE was able to lock him down to a contract.

However, those rumors did not come to pass. Ibushi’s last appearance for the WWE was with TJ Perkins, losing in the second round of the Dusty Rhodes Tag Team Classic to Alexander Wolfe and Sawyer Fulton of sAAnITyyy.

One year later, Ibushi finds himself back in New Japan Pro Wrestling, on a seemingly never-ending collision course with Kenny Omega. Another big international star coming into this tournament was Mascara Dorada, now known as Gran Metalik. Dorada had signed a one-year contract with New Japan, but the company seemed determined to not use him at all. But New Japan’s loss would be WWE’s gain, as they signed one of the best luchadors in the world to a contract, and would have him participate in the CWC. He would make it all the way to the final, having standout matches with Akira Tozawa and Zack Sabre Jr on the way. The final match against TJ Perkins was stellar, and despite the loss, Metalik seemed to be a name the WWE would build the division around.

One year later, Gran Metalik finds himself in mothballs once again. He has been on Raw and 205 Live a combined THREE times in a year, and only has one win. Noam Dar and Ariya Daivari have been on 205 Live exponentially more than one of the greatest high-flyers in the world. But don’t worry, you can find Metalik on WWE Main Event, usually across the ring from Tony Nese or the aforementioned Ariya Daivari.

Was the Cruiserweight Classic a success?

One would imagine that the goal of the Cruiserweight Classic was to create new stars, and to cultivate fan excitement in the idea of a cruiserweight division. In my opinion, that is exactly what the CWC did. Even though they couldn’t sign two of the final four (Ibushi or Zack Sabre Jr), there was still potential in the division. The WWE had a fantastic tournament, introducing people to the most exciting wrestlers in the world. Coming out of that tournament, all of the names listed above had the potential to be true stars and light up Raw and their new WWE Network exclusive show 205 Live with action like we all saw over those ten weeks.

The immediate aftermath of the Cruiserweight Classic was a lesson in how to destroy star potential. As it turned out, 205 Live just became Raw with small guys. Goofy storylines played out in front of dead, half-empty crowds that had just seen Smackdown. The sports presentation completely withered away. Most importantly, the matches were nowhere near the caliber of the CWC. The WWE somehow managed to miss the boat on almost every single person with momentum coming out of the CWC. It was like they didn’t (and still don’t) even understand what made the CWC good. It took the return of Neville, who was not in the CWC and was already on the main roster, to inject any life into the stillborn division.

In conclusion, it wasn’t the Cruiserweight Classic that failed. It was the WWE that failed. Ten weeks of successful television became eleven months of tedious matches and goofy storylines.

What was different ended up becoming the same. A title that could have been a cornerstone of Raw ended up as cannon fodder for pay-per-view pre-shows. And what could’ve been the start of something special ended up as a huge waste of time.