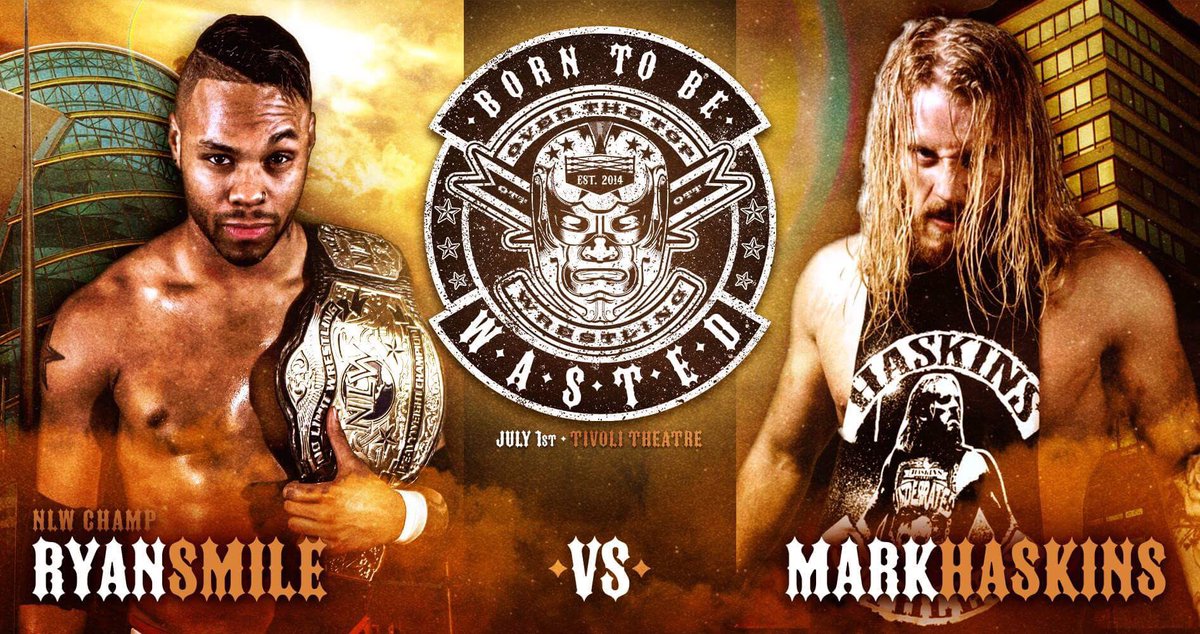 OTT returned once again to the Tivoli Theatre for Born to be Wasted, the final stop on the road to their summer supershow WrestleRama. The show is highlighted by the OTT debuts of Bobby George Jr and Keith Lee, while in the main event Ryan Smile defends the NLW Championship against Mark Haskins with the winner moving on to WrestleRama to defend the title against “The Villain” Marty Scurll.

Over The Top Wrestling
Born to be Wasted
July 1, 2017
Tivoli Theatre
Dublin, Ireland

This matchup goes back to OTT’s May show Marble Zone Act 1 where Ryan Smile and the CCK team of Brookes and Banks defeated the Kings of the North in a Marble Zone match. The gold ring CCK earned in that match, which grants them a title shot of their choosing at anytime in the future, was on the line in this one. The Kings have been the highlight of OTT in 2017 and I was hyped for Corvin to get a big singles match and he along with Brookes did not disappoint.

This was the perfect opening match with fast paced action and a red hot crowd. One scary moment was when Brookes was dumped right on the top of his head from a Corvin German suplex. Other than that these 2 had great chemistry and Brookes continued CCK’s takeover of the whole European wrestling scene when he made Corvin tap to an octopus stretch. Afterwards Brookes told us all that at WrestleRama he would be cashing in his gold ring alongside his two CCK partners Kid Lykos and Travis Banks when they take on the Kings of the North in a 6 man match for the OTT Tag Team titles. ***1/4

Oh man I do not even know where to begin with this one! Martina seems to be a very divisive character in women’s wrestling, some love her and think her comedy is great others think she is a horrible gimmick and sets women’s wrestling back years. Personally I love her and think her comedy hits the mark nine times out of ten. The Holy Mother of the Sesh as always got a great reception and I am sure every single person in attendance had all kinds of virgin related jokes running through their minds.

As you would imagine there was a lot of comedy in the match but there was also a lot of great action. Whenever Justin Shape is opposite Martina you can be sure he is going to bump around like a lunatic for her and this match was no different. Pastor was once again using his holy powers to send Logan flying and even gave Martina the power to take Logan down with a lariat. The finish came when Martina asked to be “raised up” by the Pastor to which he duly delivered and in a moment we will see in OTT videos for years to come, from a crucifix position sent Martina over the top rope onto Logan on the floor. This however allowed Justy to sneak in and roll up Eaver with a handful of tights for the win. ***

Following the match it looked like we were going to see the Virgin and the Pastor rave away their troubles only for OTT Womens Champion and Martinas long time rival Katey Harvey attack Martina from behind and remind her that WrestleRama is her last shot at the Womens Title.

In a time when heels don’t get heat, Zack Gibson may just be the best heel in all of Europe. He is absolutely despised and pairing him with Sterling and Sha Samuels is a great move as between them there is absolutely no chance of them getting any cheers. Gibson, Sterling and Samuels aim is to eliminate all Irish wrestlers from OTT and fill the company with quality UK talent.

2 Unlimited only debuted at the June show but are already firm favourites with the crowd. The action was non-stop with both Sammon brothers throwing all they had at the British duo. 2 Unlimited bring a sense of danger to their matches because their offense is so spectacular but it is often very close to ending in disaster and at times it can leave me wanting to watch their matches with my hands over my eyes. For their first time teaming together Sterling & Gibson seemed to have a good understanding and the Boston crab Shankly gates combo move was a believable near finish. In the end Charlie flattened referee Niall Fox just as it looked like 2 Unlimited had the match won resulting in a DQ win for the brothers. **3/4

After the match The Lads from the Flats came out and Workie cut a great fiery babyface promo and challenged Gibson and Sterling to a match at WrestleRama.

This was Xia’s OTT debut and actually the first time I have seen her wrestle. While she still seems very raw you can definitely see she has talent and she is going to improve and with her connections in the likely to get plenty of opportunities all across the UK and Irish wrestling scene. Katey Harvey may be the most believable women’s wrestler in the UK right now. She is straight up just a bad ass. Katey got the submission victory with a shoulder trap submission. **1/2

Another debut in this one as Bobby George Jr. made his OTT debut and instead of me explaining the Bobby George character I implore you to watch these videos:

The personal ring announcer and the fans chanting his name before even setting eyes on him meant BGJ was over right from the start. The match was nothing special but the fan interaction with the 180 call and the fans then singing Chase the Sun was pretty great. BGJ picked up the expected debut win via the double top elbow drop. **1/2

Another month and another memorable BSS six man tag in OTT. At the start of the year we all thought BSS would be gone from the UK scene but here we are seven months into the year and it seems they are going nowhere. Now that doesn’t mean we should take them for granted because eventually they will be gone and boy will they be missed. British Strong Style being beloved babyfaces in OTT while being hated heels in PROGRESS always makes their OTT matches feel unique and fun for me.

This match was no different to their past six man tag matches opposite the Kings of the North and Angel Cruz & B-Cool in that it had a tonne of brawling, some insane spots and some well timed comedy. Keith Lee’s topé was must see, Tyler Bate lifting Keith Lee in a firearms carry showcased just how damn strong Tyler Bate actually is and add to all of this Keith Lee just throwing guys including his own teammates all over the ring and you get a crazy match. In the end BSS picked up the win with a triple pedigree on Sami and proceeded to celebrate the only way BSS know how, by paying tribute to their boss HHH. ***3/4

This one started off as a squat off between B-Cool and Kenny Williams officiated by Angel. That was quickly interrupted by the OTT debut of Chief Deputy Dunne and his two newest recruits the former Fabulous Nicky and the former Bull Dempsey now Officer Nick and Officer Dempsey. I am happy to see Dunne and the Anti Fun Police debut in another promotion but this wasn’t good. A lot of the comedy didn’t really land for me in this one and any match involving Bull Dempsey is always facing an uphill battle to be any way decent. **

This should have been the match of the night, the battle of the vicious champion who will do anything to retain his title against the man who has been tearing it up in OTT all year and has tapped out everyone he has faced. Instead this was a very good match ruined by an awful Dusty finish and a restart that ended within seconds after a low blow and a curb stomp. And to top off the awful finish Mick Foley who will be OTT GM for the night at WrestleRama was somehow watching the show live and able to face time onto the big screen and book a triple threat match for the NLW Title at WrestleRama between Smile, Scurll and Haskins.

If you can ignore the awful booking this was a really good match. Smile has been great in his role since the OTT fans turned on him and he comes across a genuinely dangerous individual who has snapped and will stoop as low as he needs to to keep his belt. Haskins as always was brilliant in the ring; when does he ever have a bad match? While I would prefer a one on one match for the title at WrestleRama I am delighted that Haskins will be there. It really is hard to believe that less than a year ago he was under the impression he would never wrestle again. Twice in the match Haskins was able to make Smile tap out, once to the sharpshooter but referee Foxy was out cold after being hit with a Haskins head kick. The second time was when we all thought Haskins had won the title , Smile tapped to the bridging armbar but his feet were clearly under the ropes. Eventually Foxy reversed the decision and Smile took advantage with an instant low blow and curb stomp to retain. ***

Born to be Wasted was by far OTT weakest show of the year from an in ring perspective but that just speaks to the high standards they have set in 2017. While the in ring wasn’t great there were some key developments on the road to WrestleRama. Martina promised to drop the comedy and cans and get serious in her quest for the Women’s Title, the Lads from the Flats promised retribution against Gibson & Sterling. Chris Brookes informed Kings of the North that CCK is coming for their tag team titles. Finally Ryan Smile snuck past Mark Haskins to secure his spot in the main event alongside Marty Scurll only for Mick Foley to grant Haskins another chance by making it a triple threat match. All in all this is not a can’t miss show but it does have some important moments worth seeing. 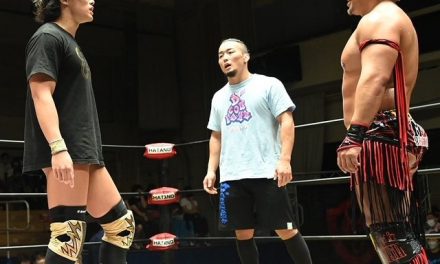