For EVOLVE 88, the promotion headed to North Carolina, the first visit since EVOLVE 13 in May of 2012, which was headlined by Johnny Gargano vs. AR Fox for the Open the Freedom Gate Title. A lot has changed since then, but EVOLVE headed south on Saturday looking to make it big and continue their expansion into new markets after successful shows in Michigan and Illinois. Hoping to get off on the right foot, they built an impressive card, with new and returning faces, two title matches, and a final encounter between the current and former EVOLVE champion.

The show opened with Lenny Leonard running down the card, and the venue layout was one of the nicer EVOLVE set ups I have seen. There was an elevated stage featuring a big video screen with the EVOLVE logo where the wrestlers would enter. I don’t know whether the improved look of the product was due to EVOLVE or just the venue, but it looked much better than the usual set up and I hope that it continues moving forward.

Caleb Konley made his return to EVOLVE for the first time since losing to Lio Rush at EVOLVE 60, facing Jason Kincaid. Kincaid was desperate for a win after losing his last 10 matches in the company, and Lenny Leonard even mentioned on commentary that Konley might take Kincaid’s spot in EVOLVE with a victory. Fortunately for Kincaid, he finally came out victorious.

I have run hot and cold on Kincaid, but I thought he was great tonight, showcasing unique and innovative offense, highlighted by him springboarding onto a pipe in the ceiling to deliver a high impact double foot stomp. He was equaled by Konley, who looked sharp in his return. Konley became a bit aimless in EVOLVE after the break up of the Premier Athlete Brand and the departure of Tony Nese, but after some time away, he could be a solid addition to the lower ranks of the company. After a solid back and forth match between the two, Kincaid locked on his Compassionate Release submission and won the match. A good start to the show. It will be interesting to see where Kincaid goes from here now that he has a win under his belt. *** ¼

This match was supposed to be ACH vs. Austin Theory, but ACH came out before to match to inform the crowd that he was a main event wrestler and would not be wrestling in the second match on the card. He disappeared backstage and was soon replaced by Ethan Case, who last made an appearance in WWN during Style Battle 4, where he lost to James Drake in the first round.

This was a solid match, but its main purpose was to get over Austin Theory’s new heel persona. Theory, now accompanied to the ring by Priscilla Kelly, came out to a new, darker theme song and displayed a more aggressive in-ring style as Priscilla Kelly stalked around ringside and occasionally whispered into Theory’s ear. Theory dominated most of the match before putting Case away with the Theory KO. Post match, Priscilla seemed to have a hold on Theory as she beckoned him away from ringside and towards the back. ** ¾

After losing to Zack Sabre Jr. back at EVOLVE 84, Ethan Page’s role in EVOLVE seems to be that of troublemaker. Page attacked Lee at EVOLVE 85, and after losing to Lee at EVOLVE 86, attacked him again after EVOLVE 87. Lenny Leonard on commentary talked about Page pushing Lee’s buttons, but even though this was billed as a grudge match, it felt mostly like a standard exhibition match to me, with Lee winning in just over ten minutes with a discus forearm. It will be interesting to see where Ethan Page goes from here, as his trajectory seems to be heading downward, but as one of the strongest performers in the company on the microphone, it seems like his talent could be utilized in a better fashion. ***

After the match, Lee called out Stokely Hathaway and Tracy Williams, telling them that there will be hell to pay for sticking their nose in his business and attacking him at EVOLVE 87. Both Williams and Hathaway came to the ring, and Williams attacked Lee. Lee fought him off briefly before Timothy Thatcher appeared and attacked Lee as well. With Lee occupied with Thatcher, Williams snuck up from behind and turned it into a two on one attack. Fortunately, Darby Allin ran out to make the save, leading into the next match.

This is Darby’s first in-ring action since getting injured at EVOLVE 82, although he has been around for the last few shows, causing havoc. The story of Darby’s return is clearly that he wants to prove that he is more than a daredevil hardcore wrestler, and if that is his goal, his first match back goes a long way towards proving it. Darby’s offense, already unique pre-injury, was kicked up a notch, as he had a few great sequences including some very smooth chain wrestling early on in the match. However, the story of the match, like many of Darby’s matches, is that he is largely more guts than brains or skill, and Tracy Williams frequently manhandled Darby both in and out of the ring. The finish came when Darby attempted his notorious Coffin Drop, but Williams reversed it into a crossface and then trapped Darby’s injured arm and forced him to submit. A really great match that managed to make both Allin and Williams look strong, with a nice finish focusing on Darby’s recent injury. *** ¾

After the match, Fred Yehi was introduced to the crowd. After Yehi made his way to the ring, it was revealed that his opponent for the night, Trent Baretta, would not be able to compete due to injury (check Gabe Sapolsky’s Twitter for pictures, it’s nasty). He then issued an open challenge which was answered by ACH. ACH claimed that he would still prefer to wrestle in the main event, but if Yehi would put his #1 Contendership on the line (he has a title match on Sunday at EVOLVE 89), ACH would be willing to wrestle. Yehi agreed and the match was on.

Like the Austin Theory match earlier in the show, this was an excellent opportunity for ACH to show off his new heel persona. ACH has always had excellent facial expressions while wrestling, and tapping into that expressive nature allowed ACH to really push his new attitude to the forefront. Every time Fred Yehi would grunt, ACH would roll his eyes. He would laugh after hurting Yehi with high impact moves and would sell annoyed exasperation when he couldn’t put Yehi away. ACH seemed a bit directionless after his title losses, but this new attitude seemed to breath new life into him, at least for one night. The match itself was great, as the mix of ACH’s speed and agility and Yehi’s unorthodox style really blended well together to produce an interesting matchup. ACH had the upper hand late in the match, working on Yehi’s back, but he got a bit too cocky, slapping Yehi and mocking him. This cockiness would be his downfall, as Yehi would make a comeback and lock on the Koji Clutch, forcing ACH to tap. *** ¾

Well, this was certainly surprising, as Dickinson and Jaka would fall to the local team of Anthony Henry and James Drake. I’ll be interested to see where all four men go from here. Are there long term plans for Henry and Drake in EVOLVE, or will Catch Point or another EVOLVE tag team claim the belts back soon? What does the future hold for Catch Point after Chris Dickinson’s post-match tantrum? I don’t have the answers, but the title switch does bring a bit of chaos to EVOLVE during a period where both EVOLVE titles and the WWN title seemed to be in stable hands. Inside the ring, the match was a fairly standard tag team affair, with a long period of Anthony Henry isolated from making a tag to his partner James Drake. Once the hot tag was made, business certainly picked up and the crowd loved the title change, but I would have liked to see the match have a little more fire in the early stretches. *** ½

This was Thatcher’s rematch for the title after he lost it to Sabre at EVOLVE 79. Just like the No Holds Barred Matches in the past, this match had a unique feel to it. At times, it felt like a wild bar room brawl as Sabre and Thatcher pummelled each other all around ringside, brutalizing each other with hard strikes and brutal looking submissions. Once it got back into the ring, it took on a different feeling, with both men turning to their technical background, locking in submissions with no regard to their ring positioning – on the turnbuckle, hanging off the ring apron, or in the ropes. In the end, the story was Zack Sabre Jr. as the clear champion, the better man, beating Thatcher and forcing him to tap yet again, this time with an Octopus hold while entangled in the ropes. I’m not entirely sure where Thatcher goes from here, but it is clear that Zack Sabre Jr. is the face of EVOLVE, and will most likely be champion for a long time.     *** ½

After the match, Zack Sabre Jr. got a microphone to speak to Timothy Thatcher. He said he had respect for Thatcher until Thatcher didn’t hand him the EVOLVE title after losing at EVOLVE 79. With his victory tonight, Sabre said the rivalry is over and asked Thatcher to end the rivalry how it began – as two guys who love wrestling. Thatcher turned to Stokely and asked for the belt. Stokely, who had tears rolling down his cheeks, handed Thatcher the belt, ad Thatcher gave Sabre the title and walked out.

After Thatcher left, Sabre gave a thank you speech to the fans of North Carolina, and even though he wasn’t supposed to, announced that EVOLVE would return to North Carolina in the future.

Although it wasn’t a standout night for EVOLVE from an in-ring perspective, EVOLVE 88 was an interesting show featuring a shocking title change and progression of a number of the promotion’s top storylines. Austin Theory and ACH’s heel turns made their mark, Darby Allin and Caleb Konley made their returns, and we saw the end of the the long-running Zack Sabre Jr.-Timothy Thatcher rivalry. If you are someone just looking for stand out matches, this may not be the best show for you, but if you are invested in EVOLVE’s storylines, this is a show worth checking out. 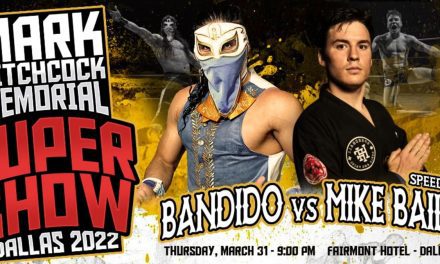 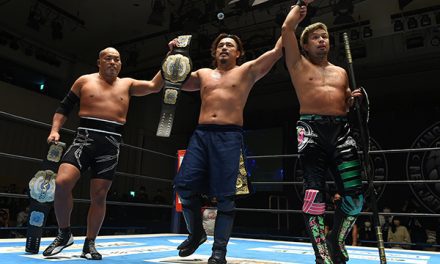