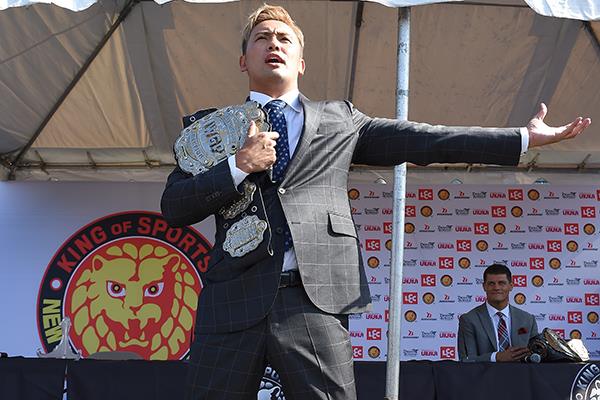 New Japan Pro Wrestling’s G1 Special in USA needed to deliver and deliver big. New Japan Pro Wrestling and most notably, NJPW’s ambitious owner Takaaki Kidani have eyes on international expansion including being the first Japanese wrestling promotion with a stronghold in the United States of America. This was Day 1 and it’s hard to call it anything but a success. Not only did the show, held in Long Beach, California’s Long Beach Convention Center, sell out almost instantly but the show, aside from an uneven first half, was spectacular.

Like proper NJPW shows, the undercard—which featured mostly thrown-together multi-man matches—was lackluster. This, combined with production woes including a downright embarrassing effort from Jim Ross, had people uneasy about the remainder of the show.

Boy, did we look stupid. The second half was every bit as good as the best NJPW show this year. The two United States tournament matches (Tomohiro Ishii/Tetsuya Naito and Michael Elgin/Kenny Omega) could fit right into the G1 and were as genuine NJPW/modern strong style as you’ll find. The main event, though sloppy at times, featured a great story, a well-built finish and the continuation of one of the more compelling storylines in NJPW today.

When this card was announced it was clear what match would open the show as this ten-man tag had a little bit of everything for the American audience: Bullet Club, Young Bucks, Will Ospreay and tons of dives. We got that and more. This was a dizzying opener which at times got a little too spotty as each of the ten men had to stake their claim to the match. As a result, nobody really stood out and the match was more of a showcase than anything. The finish, however, was smartly done as Romero, former NJPW LA dojo trainee and one of the key liaisons for getting NJPW into the Long Beach, got the surprise roll-up win. ***

Los Ingobernables were super over at the outset of the match but it didn’t take long for the Liger/CMLL crew to win the crowd over with their energy and high-flying. Overall, the match seemed to lack a ton of direction as there was no real reason for most of these guys to be squaring off. However, they made sure to make interactions between Takahashi and Dragon Lee mean more. The two had an amazing match at New Beginning in Osaka and clearly planted seeds for a future match between the team soon. Ingobernables got crafty at the end, distracting the referee to the point that Jim Ross called them “jackasses”. EVIL and SANADA used the distraction to destroy Titan with chairs. Takahashi quickly took advantage and got the pinfall after hitting Titan with the Time Bomb. Fun match but ultimately forgettable. **1/2

If you had higher expectations than “maybe it’ll be okay”, you worked yourself into a shoot. This was going to be the worst match of the entire US tournament and well, it didn’t disappoint (?) in that regard. Lethal was selling a rib injury suffered at ROH’s Best in the World PPV last week. This brings up an interesting debate: if NJPW should recognize ROH canon in their promotion? They probably should but Lethal selling an injury from a ROH PPV ended up creating a dull, emotionless match as none of the fans in attendance and very few watching at home really bought into the injury angle. The match never reached a level befitting the situation and mercifully ended after a Lethal Injection. Well, not quite. Lethal completely missed Page’s head but he sold it anywhere. After a brief audible, Lethal hit a better looking but still clunky Lethal Injection for the win. *1/4

This was the antithesis of the prior match in almost every way. Hot action throughout, awesome finish with Sabre Jr. progressing through the Octopus Hold until Robinson could take no more. The crowd was on board from the opening bell until the finish. I would have never guessed that Juice Robinson of all people would get the largest crowd reactions of the night but dammit if he didn’t have 100% of the crowd on his side by the time this match hit its peak. Just as he does in Japan, Robinson generates genuine babyface emotion from the crowd who can’t help root for the wrestler, the person and the story of Juice Robinson. In the end, Sabre—in prime prick mode on this night—was too much to handle but not after Robinson gave it 110%. This is easily the best match so far and could end up as match of the night when it’s all said and done. I’m fully prepared to be the high man on this but I don’t care, I loved it. ***3/4

The real story of this match—other than Gunn/Tanahashi building to their match tomorrow night—was Jay White picking up the win. In New Japan canon, this is huge. The last “we” saw him he was a young lion but now symbolically not only is he ready to become a roster member again, but he is going to be a big deal when he returns. Him getting the pinfall in a match featuring Tanahashi and KUSHIDA is a big deal no matter how you slice it. Now the match wasn’t anything special. Billy Gunn really struggles at bumping these days and I’m starting to really worry about tomorrow’s match. With that said, Gunn was an ultra heel to this crowd and played into that well. I have no doubt the story aspects of the match tomorrow will be entertaining… even if the match itself is a bomb. **1/2

And if you're not down with that… pic.twitter.com/TuB7CMImmJ

Before the bell, Rowe asked if GOD wanted to raise the stakes a bit and add weapons to the fray. GOD obliged and we had a No DQ stipulation added to the match. This stipulation initially sunk the match as it featured a lot of dull walk and brawling but eventually the weapons, notably a table, ended up really helping this match reach another level. These two have had much better matches in Japan proper but this was a great tag match highlighted by War Machine, who once again proved themselves as one of the top tag teams in the world. War Machine looked like a million bucks with their blend of innovative power offense, high-flying and undeniable charisma. The finish saw War Machine hit their Fall Out move on Tonga Roa through a table. It looked amazingly brutal and perfectly capped off this rugged match. On a night with a number of production issues, AXS TV cutting away from the live broadcast as War Machine was celebrating their tag title win may have been the worse. That they cut to a Sammy Hager Rock n Roll Road Trip commercial that’s been shown no less than 15 times already was just the cherry on top.  ***1/4

To the surprise of absolutely no one, these two killed it. When these guys get in the ring, all is right in the universe. The stars align. Magic happens. I think at this point it would be completely impossible for them to have a bad match. They just can’t do it. This was the first match of the night to feel like genuine NJPW with much of the modern strong style and brutality that’s helped NJPW explode globally. Naito played his character perfectly and even though much of the crowd cheered him during entrances, the Long Beach crowd couldn’t help but be dragged into the Ishii babyface vortex. It just sucks you in and you can’t escape. You want him to win. You want to root for him. You want that no-neck bulldog to pull through and get the win. It’s both unmistakable and unavoidable. Naito spent the majority of his control period playing around with Ishii, wiping his shoes off on his head and being the dickhead we all know and love. Ishii turned the match in his favor hitting a brutal headbutt to Naito’s jaw. This was one of those rare moment when you cringe and worry about the wrestler’s health but can’t help but root at the same time—just another rule in the Ishii vortex. Ishii picked up the surprise win with a brainbuster. Naito was a popular pick to win the whole tournament so Ishii picking up the first round win will be seen as an upset by many. Great match. ****1/4

Holy shit. What a way to celebrate Canada Day! Throw this match into a night of the G1 Climax and it may be the best match of the entire tournament. Worked at an absolutely nuts pace throughout, Omega and Elgin nearly killed themselves and even had JR screaming at the top of his lungs during each subsequent kickout. These two were the perfect complement to one another with Elgin’s powerful, hard-hitting offense and Kenny Omega’s next-level, all-time great selling. Seriously, Omega killed himself here and made every Elgin powerslam and clothesline look like a million bucks. The spot of the match saw Elgin hit Omega with an amazing looking sit-out crucifix powerbomb from the middle rope.

Omega shockingly kicked out of that move and got to work on his own hitting a succession of knee strikes before finally finishing Elgin off with the One-Winged Angel. This was spectacular and will be hard to follow. Kazuchika Okada’s status as sure-fire Wrestler of the Year may be in jeopardy if Omega keeps this up. The shine of his rising superstardom is becoming too hard to ignore. ****3/4

I’m happy to eat crow on this. I’ve never been a big Cody Rhodes fan, dating back to his time in WWE. For whatever reason, he never clicked with me. I could always respect the character work and often his matches were fine but trying to find the best Rhodes match ever was an impossible task. The resume was lined top-to-bottom with “good” matches but few great. When this match was announced, I was dubious on Rhodes’ ability to proud “great”, even when he was sharing a ring with the Wrestler of the Year front-runner Kazuchika Okada.

I was wrong. And I couldn’t be happier.

Rhodes delivered on this night. This was far and away the best Cody match he’s ever had and I’m not sure it’s particularly close. The blend of top notch character work, playing up to the audience’s hatred of him and in-ring. Cody always lacked a certain punch in his match with his closing stretch often leaving a lot to be desired. That was not the case here. Cody burst through a Rainmaker from Okada, hit one of his own that temporarily stopped my heart. Phew.

The big story coming out of this match will be the future of Bullet Club. After Cody tried to throw the towel in for Kenny Omega at Dominion, Omega attempted to return the favor on this night. Instead of hinting that he was going to throw it, Omega begged Cody’s wife Brandi to do it. Of course she didn’t, but this dust-up played in the remainder of the match as Cody could no longer focus.

Cody became a man possessed, not to win the match but to prove to Omega that he could win the match. Big difference. This led Cody to try and finish Okada off with Omega’s finisher the One-Winged Angel. It didn’t work. Okada squirmed out, hit Cody with a spinning tombstone and finished him off with a Rainmaker.

Cody may not have won but he proved himself worthy on this night. Okada only added to his 2017 and career resume. We’re witnessing greatness right now. Cherish it. ****1/4

An uneven first half of NJPW’s G1 Special in USA was completely overshadowed by a spectacular second half featuring a handful of ****+ matches. 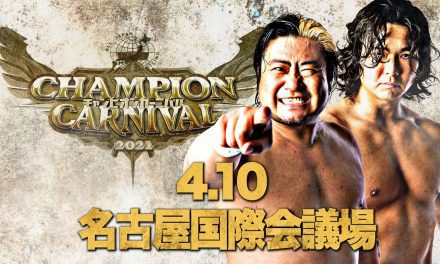 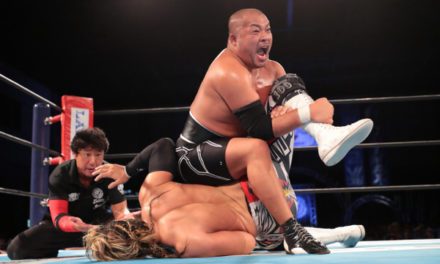