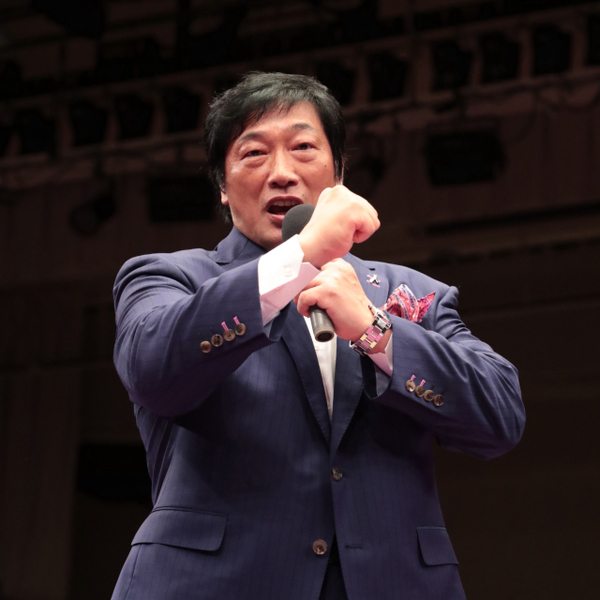 Tamura, the owner of Pro Wrestling HEAT-UP,  is one of the more underutilized junior wrestlers in Japan at the moment. He made a name for himself last summer in All Japan when they gave him a slight push with the GAORA TV title, and continued to get buzz among the hardcore indie puro audience in the west through the fall as his promotion ran its biggest show ever on October 31st, headlined by him and Minoru Suzuki. He stopped working All Japan in February of this year so has not had as many eyes on him as of late, though the matches he’s been having in HEAT-UP are quite good. It was cool to see him booked on a show like this, and it gives me hope that we could see him in NOAH if Kobashi likes him enough to put in the good word. For a crowd that was likely unfamiliar with him, they really got behind him towards the end and were popping for everything he did.

Suzuki, also one of the more underutilized junior wrestlers in Japan both at the moment and of all time, has not done a whole lot since losing the WRESTLE-1 cruiserweight title back in August and is another guy I’m hoping pops back up in NOAH here soon. Nice, clean, heated and concise opener worthy of your seven minutes. ***1/2

Matsumoto recently became the Sendai Girls champion by defeating Chihiro Hashimoto, who won it from Satomura in October, lost it to Aja Kong in January and then won it back in April, so it appears Matsumoto is simply her next roadblock. However, it added a bit more juice to this match since Sendai Girls is Satomura’s company and Matsumoto is her new champion. Satomura was the MVP as she always is, but the other three more than held their own and looked great. Konami and Shirahime are 20 and 21 years old respectively, Konami being a student of NXT women’s champion Asuka and Shirahime being a student of Satomura. When you take into account who their trainers are and the fact that they’re already incredibly impressive for their age and experience levels, you can make a safe bet that they will be two of the shining stars of joshi within the coming years. Fun, classical joshi style tag. ***1/2

Kiyomiya debuted in December 2015. Nomura debuted in March 2016. For two guys that are so new to wrestling, with so little experience, so little time to grow and progress, these two are incredible. Kiyomiya and Nomura, with how good they are in the ring, with how much charisma they have, are the future stars of Japanese pro wrestling. Kiyomiya works and looks like a grumpy, cynical little prick who hates everyone and everything for no reason whatsoever, yet you still feel bad when watching him get his ass beat. He’s being a prick, but he’s still a rookie, he’s still a kid, he’s still trying to prove himself. He has an innate ability to garner sympathy and be an aggressive asshole at the same time, it’s truly a special talent, one unlike anything else we see in wrestling. And Nomura, while he may be adorable, can hang with the best of the best and take on anyone. Between the force and the speed in which he works with and his massive amounts of heart, he’s one of the most dangerous wrestlers out there.

Shiozaki and Okabayashi were not as involved in the match as Kiyomiya and Nomura were as they mostly stood out of the way and let the rookies have their time to shine, but they were obviously great in their own right. When it comes to tag matches in Japan this year, this is as good as it gets. It had the heat, it had the drama, it had everything you could ask for, so go out of your way to watch it. ****1/4

While I enjoyed this for what it was, it was the wrong type of match to have on this show. Fortune Dream is not the place to have a 30-minute southern style tag. If you’re going to work a 30-minute tag match on one of these shows, it needs to be like the one from last year. It needs to be 30 minutes of dudes mauling each other, and while there was a bit of mauling here, it was way too slow and way to drawn-out at times. Raideen, though he has improved and was decent in the match, was in the ring for way too long and as a result it lacked the heat you would expect from the semi-main event of a Fortune Dream show, especially one involving Shuji Ishikawa and Joe Doering.

It was far from bad, it was technically a good match with clean work and solid performances, and as mentioned I did enjoy parts of it, but overall it was not what I thought it should have been. Hard match to rate. ***1/2 or something like that.

Shingo and Suwama, along with Go Shiozaki and Hirooki Goto, came up at the same time back in 2006 and were groomed to be the future star of their respective promotions so have always been linked despite never really crossing paths, Shingo and Suwama having only wrestled once back in early 2015. On the other side, Sekimoto and Sato came up together in the early 2000’s and have always been connected for the same reasons, though they’ve obviously wrestled much more than Shingo and Suwama have. Kobashi did an excellent job pairing these teams together in that regard.

While this never peaked as highly as last year’s main event, it followed a similar formula and was worked quite well. Seeing Shingo outside of Dragon Gate, which has been much more common than it usually is this year as he was also announced for WRESTLE-1’s September 2nd show, is always a pleasure. He and Sekimoto have great chemistry with one another. Proper big lads wrestling match here, just about everything you would expect from it. Will it end up on any Match of the Year lists like last year’s did? No, but it was a worthy main event. ****

Probably the weakest Fortune Dream show as a whole but that is not saying much. Top to bottom this was still highly enjoyable and featured two excellent matches in Kiyomiya and Okabayashi vs. Nomura and Shiozaki and the main event, with every other match being good at worst, so do make some time for it.