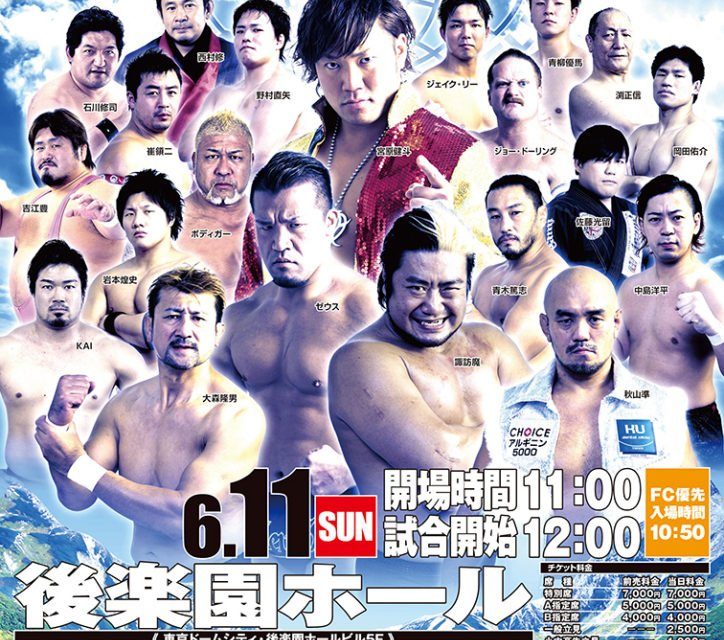 Iwamoto is in line for a shot at Hikaru Sato’s title and there’s a good chance he beats him, so it seems All Japan knows what they have in him. If they’re smart, they’ll do everything they can to keep Yoshida and Abe around as well. Yusuke Okada took the pin in about six minutes in what was a standard multi-man opener. **1/2

In its short existence, this title, which I have no idea what is for, has been used similar to the GAORA TV title where it’s defended against random mid-carders. Not much of a match here, just a few minutes of them walking around beating each other up. Fun for what it was. Nishimura ended up retaining. **1/4

Basically Doering and Aoki squashing two rookies who did everything they could to hang in there but eventually fell to the veterans. Aoyagi is by far the best babyface on the roster and is one of the best underdog wrestlers in the world.

It was announced at intermission of this show that he’ll be getting his long-awaited rematch against Taichi from Super J Cup at the August Sumo Hall show, another match that’s sure to be full of heat. It only went four minutes, but this was as good as a four minute match could be. ***1/4

Remember when WWE brought TAJIRI back for those ten minutes? Yeah, well, that’s done and he’s back in Japan full-time now. It’s unfortunate because he seemed happy to be back and was actually delivering in the ring, something he previously had not done in years, but apparently his age was an issue and they had no use for him, which is utterly bizarre.

I’ll gladly take him in All Japan however as I’m sure he could have some fun matches. He pinned Maruyama here and challenged Akiyama for the GAORA TV title. Decent multi-man with the old fellas. **3/4

With KAI being the happy-go-lucky babyface who constantly gets in the way and Mashimo being the hard-ass straight man who just wants to get in there and do business, the two make for a tremendous buddy-cop duo. Mashimo was forced to team with this guy in order to chase the tag titles, and despite winning them, he still refused to accept KAI as his partner. He looked like he wanted to kick the hell out of him during the early stages of this match, even spitting in his face for no reason at one point. KAI had to do everything he could to prove himself to him, to show that he was just as serious about the match as Mashimo was, to show that he was a worthy tag team partner who he could count on, and eventually Mashimo did accept him.

Mashimo for some time now has been dealing with a knee injury and tried pushing through this match in spite of the pain, but unfortunately that’s what did him and KAI in as the former champions used it to their advantage once it started acting up towards the end. With Mashimo being stuck on the outside dealing with his knee, KAI fell to a Doomsday Device and a jackhammer as Zeus and Bodyguard reclaimed their gold. While far from the best All Japan tag title match in recent vintage, this was very well-worked, very well-paced, and told a very good story. Mashimo will be out for a while as he deals with his injury, and with him and KAI out of the way, Akiyama and Omori stepped up as the next challengers. ***3/4

All Japan has done a nice job setting up their Sumo Hall show, starting with Ishikawa winning the title and now with Suwama pinning Miyahara clean in Korakuen to become Ishikawa’s next challenger and not Miyahara. What this does is set up a realistic scenario where either man could go into Sumo Hall as champion to face Miyahara, who is clearly next in line, as opposed to Miyahara winning and then waiting it out to face Ishikawa.

Now it’s a possibility that Suwama will go into the show as champion, so we’re either getting Suwama vs. Miyahara again, or we’re getting what was expected when Ishikawa won. Personally I’d go with the latter to avoid overkill of the Suwama vs. Miyahara feud and also because Ishikawa vs. Miyahara would probably have more buzz and may even draw better.

As for the actual match here, there were people who liked it a lot more than I did. I liked it, it was good, but Miyahara has set such a high bar for himself to where a match of his being good and not great is a little disappointing. It was poorly paced at times and did not have that sense of urgency and aggression you would expect from not only a Suwama vs. Miyahara match, but a Suwama vs. Miyahara match with high stakes in the semi-main event of Korakuen Hall. Aside from that, it was clean, concise, and the right guy won. Suwama gets his shot on July 17th. ***1/2

Jake Lee proved himself against Miyahara in the Champion Carnival two months ago and showed that he can hang with the best, but in many ways, this was his coming-out party. It was the biggest match of his career, it was his opportunity to show that he’s more than Miyahara’s buddy, more than a tag wrestler. It was his opportunity to show that he’s a main eventer. He can hang with his friend, a guy he’s known for years, sure, but can he hang with Shuji Ishikawa, a man he’s unfamiliar with and a man unlike anyone he’s ever faced before? Can he hang in the main event spot, or will he choke under the pressure?

Jake Lee showed that he can.

Not only did he show that he can, but he took Ishikawa further than even his biggest believers expected him to in the process. He proved himself in this match, he showed how much heart he has, how far he’s willing to go, how much he WANTS it. Ishikawa had the size, the brains and the skill, but Lee had the heart and the guts. It was not enough to  get him the win but it was enough to show that he’s a threat to the throne. Come two or three years, he’s going to be one of the biggest superstars in the country, and I promise you that. He has the charisma, he has the look, he has the skill, and All Japan will have to actively try to hold him back in order to prevent him from becoming a star, I have that much faith in him. Get on board now.

Ishikawa debuted a new look here as well as he ditched the pants and wore black tights as a throwback to the likes of Jumbo Tsuruta, which was his way of showing how serious he is towards being Triple Crown champion and how much it means to him. He’s also been using a backdrop slam to win his matches, so the moment someone kicks out of it, perhaps Miyahara in Sumo Hall, will be huge. He beat Suwama with it on opening day of the Carnival, he beat Miyahara with it to win the title, and here he beat Jake Lee with it. While it was far from the best Triple Crown match this year and far from the best All Japan match this year, this was top of the line in terms of performances and emotion. It was a match that fans of the classic Triple Crown matches of yesterday can enjoy on some level. ****1/4

Fine show, nothing special outside of the main event and the tag title match, but a decent outing for what in my book is currently the second best wrestling promotion in the world. It did 1,312 fans as opposed to the 1,315 Miyahara and Ishikawa did on May 21st, so another success for the company as attendance holds steady.

As mentioned, Ishikawa and Suwama are headlining the next show on July 17th with no other matches announced yet. I  cannot stress it enough, watch the main event of this show.