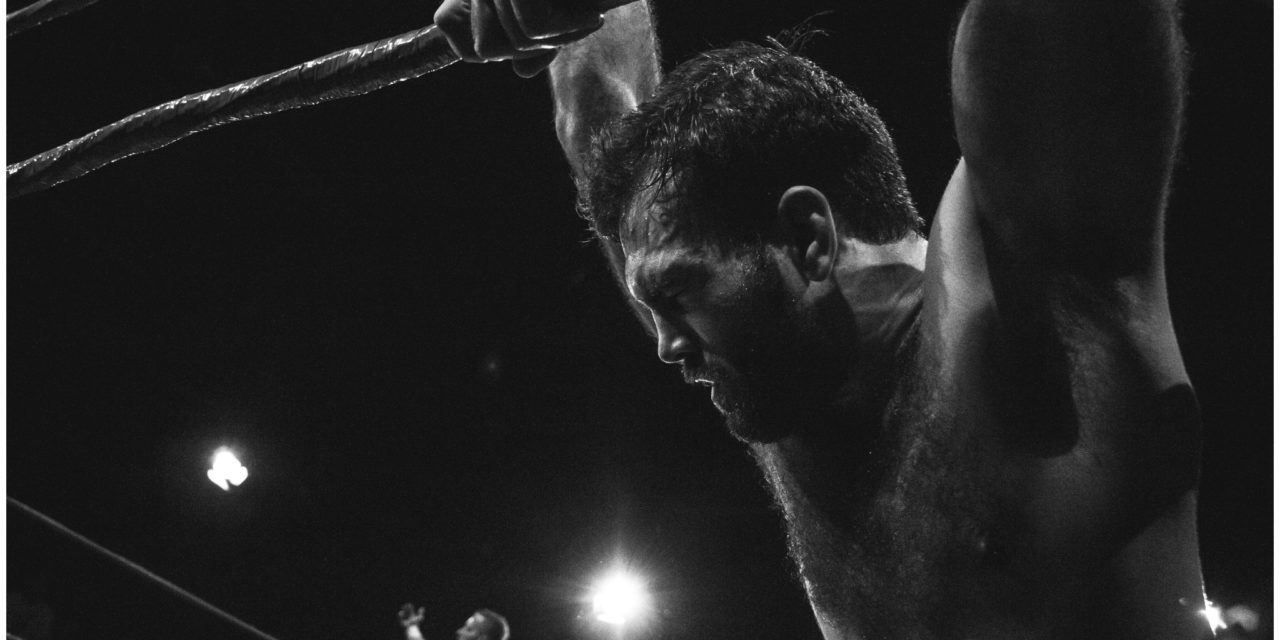 We’re back in the Dream Factory for another Live at the Cockpit. These shows have turned out to be some of the most fun of the BritWres year so far, and have been easy to invest in due to the well-paced stories focussed on individual wrestlers or teams and their in-ring exploits, with no overwrought drama or political meddling. This show features the return of Donovan Dijak after his great match with Josh Bodom at the last Cockpit show, as well as a Suzuki-gun team of Davey Boy Smith Jr. and Zack Sabre Jr. taking on the British Tag Team Champions, Travis Banks and Chris Brookes, in the main event.

El Phantasmo is a new arrival in Britain, having wrestled for 10 years almost exclusively in Vancouver/British Colombia. He’s committing himself to a run in Britain and made a good start in this match. He looks the part, if a little too reminiscent of both Angelico and ‘Feel the Glow’ Naomi, and more than kept up with Starr here. This was a pretty standard David Starr match with cutesy comedy naturally evolving into some serious, fast-paced wrestling later on. That kind of match structure always works well in BritWres and especially in an opening match environment. Phantasmo didn’t get a whole lot of offence in down the stretch, with Starr outgunning him with big moves, but that’s how the match should go if Phantasmo is to start at the bottom in Britain and work his way up the card as his stay goes on. RevPro have also established Starr nicely for a shot at Bodom’s Cruiserweight Championship. ***

This is a rematch of a really good squash match from a couple of Cockpit shows ago, and started much the same as the previous one, with lots of crowd brawling and Contender-tossing. The brawling was a little less fierce this time around with a couple of awkward looking spots where the teams were trying a little too hard to make complicated stuff work. After just about surviving sustained Riots attacks, Chapman and Wall both showed good babyface fire in their brief comeback, only to get stifled again. The Riots were close to finishing them off when CCK appeared, stole the Riots’ cricket bats, and hit them with belt shots, allowing Chapman to hit a frog splash and pin James Davis. The visual of stick-thin Chapman landing on and pinning the bulky Davis was an odd one, but the Riots had a big out in losing and actually get a bigger future match against CCK in doing so. I would have hoped a Contenders win would have felt like a bigger deal than this, but this does at least give the Riots something to really sink their teeth into in RevPro. **½

Bodom and Dunn showed up wearing the same shade of shiny purple. Where are the Fashion Police when you need them? Dunn’s ‘grunge-y’ look doesn’t suit the shiny spandex at all, but he’s still early in his career so I’ll give him some leeway to figure out what attire works best for him. They went to the big moves early, including a Bliss Buster as one of the first moves of the match. Unfortunately, this also led to some botches as Dunn attempted some wild manoeuvres with varying degrees of success. Those missteps hurt the momentum of the match and caused the later moves to mean a lot less than if there had been totally crisp execution of slightly less inventive moves. Dunn is really good at selling though and his ragdolling for Bodom’s final moves to put him away looked tremendous, so he does have plenty of value in-ring, but he may need to bring it back to basics when it comes to executing his own moves. **

Two of the tallest Big Lads in indie wrestling going at it here. Both Dijak and Dennis can banter with the crowd and their opponents well and there were plenty of fun moments between them in the early going. It wasn’t just meaningless humour though, as Dennis is playing up his RevPro storyline of never being able to win because he’s too engaged with out-bantering his opponent rather than outwrestling him. The story of Dennis trying to strike the right balance of fun and a sincere drive to win is another low-key story that RevPro have presented really well.

After some initial success against Dijak, Dennis began to be manhandled. Dijak’s power moves were super impressive against a man the size of Dennis and were executed with proper animosity, which Dennis reciprocated well. Their interactions were sometimes cheeky, sometimes heated, but always conveyed both men’s emotions well, so it was very easy to get into this match and get behind Dennis searching for his first win. You could feel the struggle of his slow execution of the Next Stop Driver and it was genuinely sad when Dijak kicked out and it felt like it wasn’t going to be Dennis’ day again. RevPro have hooked me without having to make the storyline overwrought; everything you need to see is in the ring. Two Feast Your Eyes put Dennis away for good, giving Dijak another win in RevPro and continuing Dennis’ woes. Eddie’s proven himself as a singles wrestler at the Cockpit this year, and the story’s gotten to the point where they may give him the big win at the York Hall. ***½

Gibson went straight to grinding down Angelico on the mat, and actually looked good by just relentlessly going for holds and never letting Angelico up. This is Gibson’s MO and ironically it helps him stand out amongst wrestlers who only do elaborate spots. Obviously there’s a middle ground and Gibson can fill that, but by starting a match with little flash, Gibson’s offence does feel more substantial later on. Angelico is able to turn a match around very quickly, and one pinpoint knee brought Gibson down, letting Angelico show off his stuff after several minutes of selling. This was a better showing by Angelico than his recent York Hall appearance against Jay White, and it’s perhaps because he worked a match that was definitively a slow-paced, technical match against a well-established heel rather than an exhibition-feeling match against White that didn’t have an identity.

Gibson kept his focus on Angelico’s arm throughout, even when the match became faster and more counter-for-counter. His punching Angelico’s arm while it was wrapped around his back was something I’ve never seen before but looked painfully awkward and made Gibson look like a man who will take every opportunity given to him, even if it’s an unorthodox one. All that arm work of course ended with a Shankly Gates and a submission win, as RevPro keep Gibson strong heading into his eventual match with Will Ospreay, which may well happen in August at Summer Sizzler. ***

I’ve never seen Nina Samuels wrestle before, but I immediately hate her because she used circa 2014 pop music as her entrance that made me remember the time when I was a disgusting Fresher hanging out in awful student night clubs. I’ve graduated now, and don’t need to think about those times any more now that I’m an actual human. Her ring attire was reminiscent of GLOW leotards that are about to come back into fashion with the new Netflix series starting, so Samuels should probably stick with that look and may well find increased success with it soon.

The Cockpit is Jinny’s house though, and her winning streak was unlikely to end in this match. RevPro don’t have much of a women’s division, but they’ve built Jinny very well and kept the focus on her, so whoever does eventually beat her will immediately be a second prominent woman in RevPro. Jinny interacts with the crowd very well and brings them into the match, though her attempts to piss off Samuels weren’t responded to with much fire. It seemed like Samuels couldn’t go ‘off script’ on the match in that regard. She was good enough to warrant a repeat appearance, but I reckon she has a better match in her. Still, Jinny got to look dominant again and that was the most important takeaway from this match. **

DBS Jr.’s a strange BritWres import, in that he can do the family/camp shows as ‘Former WWE Superstar’ and ‘Son of the British Bulldog’, but also has the chops to do the ‘cool’ indies as ‘Suzuki-gun member’. Here he’s a bit of a mix of both, playing up his fake Briton act while teaming with ZSJ under the Suzuki-gun banner. It’s cool to see a new combination of SZG members team in RevPro, even though DBS is stewing on Twitter over not having a G1 spot while Sabre strolls into the tournament after wrestling less than 10 matches in New Japan.

It’s also interesting to see CCK as the babyfaces here, with Andy Quildan on commentary mentioning the fans are behind them while maintaining Sabre’s pseudo-heel character. Brookes and Banks are always cheered in RevPro despite being positioned as heels, so that alignment may be naturally changing itself. Brookes was in peril for much of the match, saved for brief periods by a fired up Banks, so they certainly proved that they can play the face team compellingly.

DBS played a good supporting role to Sabre’s prickish behaviour and the pair made a fine heel team, though Smith’s action in-ring was less interesting than Zack’s, perhaps due to unfamiliarity with CCK. It was a smart idea, then, to end the match with Smith and Banks brawling to the back and putting all the focus on Sabre and Brookes. The pair had a strong few minutes to end the match, with Brookes hanging with Sabre and eventually wrapping him in an Octopus Stretch for the big upset win, making the Technical Wizard give up. It was a ‘live to fight another day’ submission loss and so doesn’t really hurt Sabre, but it was still a huge win for Brookes and sets up the biggest singles match of his career against ZSJ at Summer Sizzler for the British Heavyweight Championship. It’s a huge opportunity for Brookes and a great all-Brit matchup to appeal to a different audience to the Rey Mysterio/Marty Scurll match that will likely main event that show. ***

There were no blow-away matches on this show, but the Cockpit remains remarkably consistent and fun in its execution of simple long-term storytelling. Jinny, Zack Gibson, Eddie Dennis, CCK and even imports like Donovan Dijak are all given good chances to succeed in the ring and feel like important characters that are easy to invest in. The surprise result in the main event sets RevPro up for a very interesting summer of shows, including both the British J Cup and Summer Sizzler.