We’re rocketing towards the conclusion of the first season (and possibly the whole series) of Tiger Mask W and the action is hard-hitting and fast-paced.

We’re past the halfway point in the final series of matches between NJPW and GWM. After the first three matches, GWM leads the series 2-0-1 and injuries have whittled both teams down to three members each. Today, we’re getting match four and this is a match that New Japan has to win if they want to survive so let’s get right to it.

Before we do that, don’t forget that you can watch every episode of Tiger Mask W over at Crunchyroll and if you want to find the rest of my recaps, you can do that here.

The episode begins with the GWM commentator recapping the events of last week and confirming that both Tanahashi and Miracle II are on the way to the hospital following the trios match they were involved in. When talking about Miracle II’s injury, the commentary team discusses Tiger Mask’s new killer move and wonders what it’s called. Kentaro tells Haruna to tell the team that the move is named Tiger Clench, but she calls an audible and says that the name is Tiger Fang. When Haruna gets back to her seat, she tells Kentaro that he was the only one that liked the Tiger Clench name, which seems odd seeing as only those two had talked about it. I was hoping we’d get a series of flashbacks showing Kentaro suggesting that name for every move that Tiger Mask tries, but alas.

As Tiger Mask and Tiger the Dark walk to the back, the crowd is less than supportive. In the New Japan locker room, they discuss who to put in the upcoming tag team match. Nagata says that Okada needs to be saved for the singles match later, but Ryu is skeptical of Tiger the Dark’s abilities. Takuma tells the young lion that he’s worked out the kinks and Naoto agrees that they’ll get it together for this next match. The fate of New Japan is in the hands of these two tigers.

Nagata assumes that Miracle I and Big Tiger will be the opposing team, but Miss X has other ideas. When the GWM tag team is revealed to be Big Tiger and The Third, the New Japan contingent is surprised to see the GWM Heavyweight Champion standing against them.

Luckily, this is exactly what Tiger Mask and Tiger the Dark were hoping for.

This is everything I was hoping this show would be. #TigerMaskW pic.twitter.com/f22M4wJsJL

Match 4: Tiger Mask and Tiger the Dark vs. Tiger the Great the Third and Big Tiger the Second

The match is started by Tiger Mask and The Third, finally giving us the true face off between these two. Naoto lets his rage get the best of him and he becomes unfocused. The Third toys with him, dodging Tiger Mask’s attacks and nailing him with hard strikes. Tiger the Dark insists on being tagged in and The Third is happy to oblige him, throwing Tiger Mask into his corner. Takuma tags into the match and Big Tiger enters the fray as well.

The two men lock up as Tiger Mask and The Third lock eyes across the ring. Tiger the Dark and Big Tiger are pretty evenly matched, but Takuma has an edge in stamina. Big Tiger is already gassed after a short time in the ring and desperately needs to tag back out. In the eloquent words of the GWM announcer; “It’s two matches in a row. That’s tough for an oldie.”

The Third tags back into the match and he voices his surprise that Tiger the Dark is standing in front of him again after he took him out a few months ago. The Third shows more aggression than we’ve seen out of him before, actually losing his composure and booting Dark in the chest. Takuma staggers back, but doesn’t fall down. Before Dark can retaliate, Tiger Mask tags himself in to face The Third again. The two men compete in a test of strength during which, The Third remembers the other young man at the side of Daisuke Fujii back when Yellow Devil crippled him. He tells Naoto that he’s not fit to wear a tiger mask, to which Naoto responds by dropkicking The Third in the chest. Tiger Mask goes for the Tiger Fang, but The Third already has the move scouted, stepping forward and turning it into a modified powerbomb.

Tiger Mask isn’t on the mat for long as The Third lifts him into the air with his legs in a figure four position, setting up his killer move, Sacrifice. Just when The Third is about to put away Naoto, Tiger the Dark jumps in the ring and breaks up the move with a dropkick. Before he’s able to do more, Takuma is attacked by Big Tiger and lifted into position for the Skewer. Tiger the Dark squirms around enough so that Big Tiger can’t execute the deadly move, but he does get dumped to the outside, where he lands on the back of his neck.

While Takuma lies unconscious on the outside, Tiger Mask takes a beating in the ring from his opponents. From the crowd, Takuma’s father screams for him to get up as The Third attempts to rip off Naoto’s mask. Tiger the Dark begins to stir while his father continues to call for him. Naoto’s mask shreds as The Third tears at it with his fingers. Suddenly, to the shock of Ruriko, Daisuke rises to his feet for the first time since he was drastically injured by The Third. Takuma is just as shocked as Ruriko when his standing father tells him to get back in the ring to help Naoto, which is the important word there because Daisuke just dropped his name in front of Ruriko like it was nothing. Though I suppose it doesn’t really matter as The Third rips off Naoto’s mask a few second later, revealing him to everyone.

Fueled by his father’s screams and seeing his friend hurt, Tiger the Dark gets into the ring, ready to end The Third. The former Yellow Devil attempts to use the Devil’s Tornado, the very move that left the scar across Takuma’s face, but Tiger the Dark ducks the blow. Takuma’s eyes glow as past memories flood his mind. It’s finally time for revenge. Tiger the Dark uses his new killer move; the Crossbow, a flying crossed forearm strike to the jaw, followed up by a double backfist strike. The move sends The Third flying into his corner like a ragdoll. While he wasn’t able to pin him, Takuma just clearly defeated The Third.

Big Tiger tags himself in as The Third lays lifelessly in the corner. Tiger the Dark delivers a second Crossbow to Big Tiger, who flies into the arms of Naoto. The maskless Tiger Mask plants Big Tiger into the mat with a German suplex and gets the three count for his team.

What a match and what a redemption story for Takuma. I’ve said it before, Tiger the Dark is the true hero of this series. ****


Haruna runs into the ring to throw a towel on Naoto’s head. Meanwhile in the crowd, Ruriko informs Daisuke that he stood up to cheer on his son. He was so engrossed in the moment that he didn’t even realize he had willed himself to his feet for the first time in a few years. He confirms to her that Naoto is indeed Tiger Mask, a revelation that makes everything make much more sense to her than it did before. There’s an odd sense of relief in her voice.

In the New Japan locker room, things are much happier than they have been recently. Nagata has a big smile on his face as he congratulates the Tigers on their victory. Okada is raring to go to keep the hot streak alive for New Japan. Meanwhile in the GWM locker room, things aren’t so great. They’re still in control of the series, but Big Tiger is incapacitated after that big combo from the New Japan Tiger Squad. Mister X enters the room and begins to change Miss X’s plans of having The Third end things there. After the New Japan victory, he’s shook. Mister X proposes taking the L in match five, making match six the final deciding match of the series. Instead of putting The Third up against Okada, Mister X wants to place Miracle I in that spot to tire out Okada as much as possible. Everyone talks like match six will be a given, causing a confused (and probably a little hurt) Miracle to ask “Why do you assume I can’t beat Okada?” Miracle I has barely seen any action on this card, so he’s ready to go.

Match 5: Miracle I vs. Kazuchika Okada

Everyone on the New Japan side is shocked to see Miracle I facing off against Okada, but the Rainmaker insists that he’ll win, no matter who it’s against. When the bell rings the two men carefully inch toward each other. When they’re close enough together, Miracle I spits poison green mist into Okada’s face.

The episode ends as Okada holds his burning eyes and Miracle I prepares to attack. Unless the referee looked away at the perfect time, this has to be a disqualification, right?

Either way, we’re nearing ever closer to the final battle between the forces of GWM and NJPW. Today we say for the first time that The Third can be beaten and now the same can be said for GWM.

Let’s go New Japan! I hope you’ll all be there to help me cheer them on next week too. Talk to you all then! 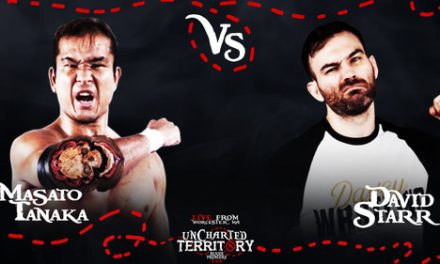 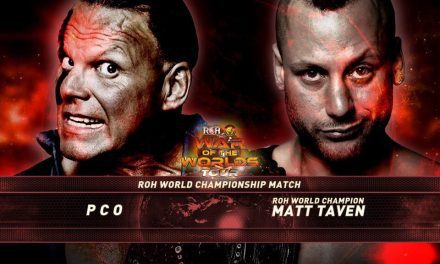