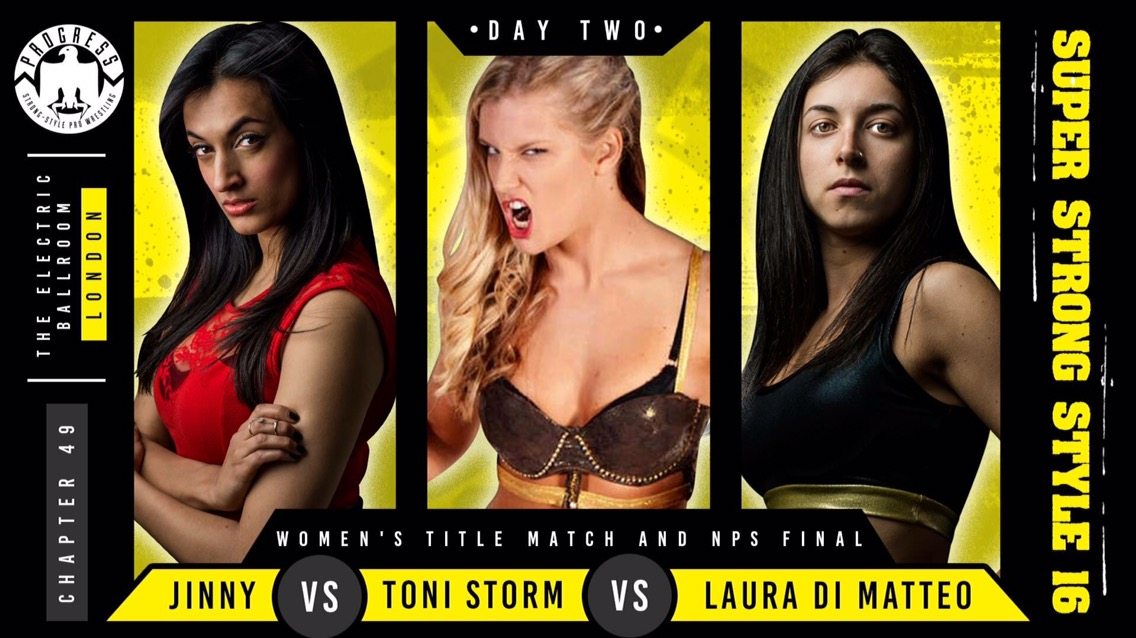 Progress returned to the Ballroom for the second of three consecutive nights of the highly anticipated Super Strong Style 16 tournament. The show featured the quarter finals of the SSS16 tournament and was main evented by the triple threat final of the Natural Progression Series to determine who would be the first ever holder of the PROGRESS Womens Championship.

The London Riots were looking to pick up their first win of 2017 in Progress against two guys who were hoping to bounce back after being eliminated on day one of the SSS16 tournament. Mandrews and Flash (or Team ATTACK! as the PROGRESS fans christened them) worked well as a unit incorporating some flashy tag team maneuvers. The Riots, while having control for parts of the match, never seemed close to getting the win and in the end James Davis fell victim to a Stundog Millionaire, a Destino by Flash and a SSP from Andrews. **3/4

A battle of the former WWE:UK Champion against the PROGRESS Champion that never lost his title. Both of these guys are great wrestlers but when he picks up the pace and the intensity Mark Haskins is unrivaled; he makes a simple snapmare and kick to the back look vicious. Once Bate takes control he slows the pace and uses a series of kicks and submissions to keep Haskins grounded. The crowd is firmly behind Haskins and while they are impressed by Bate’s strength they refuse to support him. Some the counters and transitions in this match are truly exceptional. Mark Haskins appeared to have the match won as he had Bate trapped in the sharpshooter until Pete Dunne ran to ringside and pulled the referee out of the ring. This in turn drew Jimmy Havoc, whom had been doing guest commentary, to ringside but as he chased off Dunne, Trent Seven snuck into the ring behind Haskins and delivered his patented snap dragon suplex followed by a piledriver to allow Bate pick up a cheap win. ***1/2

Before the match begins we can see Jack Sexsmith has his left arm in a sling and he says in his match the previous day against Zach Gibson he suffered a tear in his bicep and he has been advised not to wrestle but that he worked too damn hard just to get into the tournament so he was going to compete.

So how did ZSJ against a one armed man go? I thoroughly enjoyed it. Sexsmith had an early flurry and showed incredible guts just to have a match of any kind. Sabre for his part came across as the reluctant badass killer who didn’t want to hurt Jack any more than he already was. Sexsmith quickly tapped once ZSJ locks in a single leg crab. ***

The Chosen Bros faced off in the third quarter final and what a quarter final it was. Right from the off Riddle goes for the knee that KO’d Trent Seven the day before but Cobb evades the move; that knee has now been established as a killer move in Riddle’s arsenal. Early on we see how evenly matched they were on the mat as both utilised their wrestling backgrounds to nullify each other. But when the action picks up and these guys start trading blows and suplexes it soon becomes clear that this match is something special. It almost becomes a game of ‘can you top this’ between the two, an example being Riddle goes for his rolling gutwrench suplexes so Cobb decides to just spin Riddle from side to side in repeated gutwrenches before suplexing him. Also the open hand chops that both guys lay into each other with echo through the Ballroom and both men’s chests are beaten red by the end of the match.

The closing minutes were absolutely insane. Riddle showed incredible strength to get Cobb up for the jumping tombstone and when Cobb kicks out at one and then the follow up is two fisherman busters the Ballroom explodes. The moment when I absolutely lost it watching this is when Cobb hit what I think the highest destroyer I have ever seen followed by a pop-up German suplex that made me leap up out of my chair. Riddle somehow survived that and avoided the Tour of the Islands and was able to connect with the killer knee to pick up the win. Phenomenal. ****3/4

The last of the quarter finals seesFlamita and Banks battle for the right to face ZSJ in the semis on day three. They started at a fast pace before strangely it was Flamita that slowed the pace down to work over Banks. Once Travis comes back into it the pace picks up again and never lets up as both guys fail to maintain control for any length of time. The PROGRESS faithful are behind both guys but Travis is definitely their guy on this night. Banks survives the Flam Fly before Flamita kicks out of the Kiwi Krusher. Ultimately Flamita’s high flying was to prove costly as he misses a 450 splash and Banks instantly locked in the Lions Clutch for the tapout victory. ***1/4

Trent Seven was coming off a loss to Matt Riddle in six seconds from night one. I say this because the majority of this match involves the number six and the PROGRESS fans repeatedly chanting things involving the number. Look I love a lively crowd, but they drive the joke into the ground, drive over it, reverse back over it, drag it back up and then repeat the process oh I’d say about six times. We get it he lost in six seconds.

Anyway this was a fun match. Pete Dunne is a personal favourite and whether being serious like he is in WWE or in a more comedy heavy match like he tends to be in on the indies right now he always puts in a performance. A lot of six based comedy in the match involving Seven before BSS get the win over Starr following a piledriver from Seven. **3/4

This was the final of the fourth National Progression Series which started all the way back at Chapter 38, and the first time women have main evented a main chapter show. The women started fast like they had something to prove being in the main event and the action never let up. Plenty of the usual triple threat tropes with one person standing/lying off to the side while the other two fought. There was also a couple of scary moments when Jinny missed a running splash at Di Matteo and went through the first three rows of chairs and then on the opposite side Toni attempted the same thing but she went about seven rows deep. There was plenty of great action as all three battled in and outside of the ring and even up on the stage where Storm was able to put Jinny down with her piledriver. In the end Toni proved too powerful for her opponents as both Di Matteo and Jinny fell to a piledriver a piece. The inaugral holder of the PROGRESS Womens Championship is Toni Storm! ***1/2

Overall this was a fun show with one standout must see match between Jeff Cobb and Matt Riddle and a historic main event. After a stellar first night and leading into the final night of the weekend it is understandable that some of the talent would have been a bit reserved in their performances on this show, but even if some did hold back it was still a very enjoyable show with not a single really bad match. 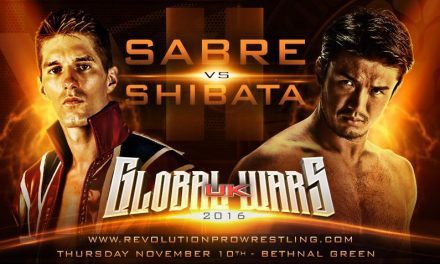 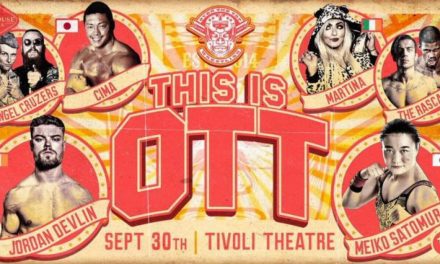